Sorry, had to be done! Suddenly Susan headed out to meet Spartacus and Divergent star Jai Courtney. He played Spartacus’s best friend in the first season and was instrumental in the Andy Whitfield documentary.

I’m going to turn it over to Suddenly Susan because she has a brilliant recap!

I just knew Jai wouldn’t disappoint, and on his way out of the taping, he came right over. What an awesome guy. He took his time with everyone who was waiting, signed whatever you had going and waited to make sure your photo op came out ok. I heard him say at least twice after a fan selfie, “how’d we do,” as he checked the camera.

We it came my turn, I asked him to personalize the Die Hard photo I had, which he happily did, adding ‘with love’. Before asking for a photo op, I just had to show him my arm tattoo. From here, I’m going to get a little personal. 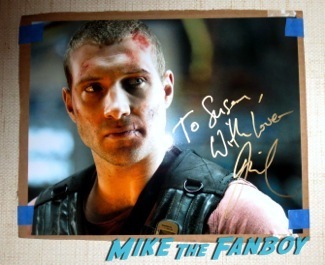 On my inner, right forearm, I have the words Be Here Now tattooed. A lot of people ask me what it means and where I got the idea. Be Here Now is a Jimi Hendrix song, the title of a book on spirituality, and a yoga mantra. I, however, got the idea from Andy Whitfield. 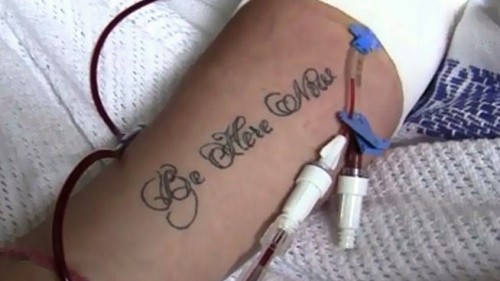 He had a similar tattoo on his right forearm. I was introduced to it in the trailer for the feature documentary entitled, “Be Here Now” about Andy and his battle with cancer:

Bonus points if you can get through the trailer without crying.

To me, it means living in the moment, be it good or bad, and not worrying about 5 minutes ago or 5 minutes from now. It’s a healthy, stress free motto to live by…. it’s also much easier said than done. But, like most of us, I work on bettering myself daily and I try to keep this in mind. Hence the tattoo.

When I showed it to Jai, he was taken aback, and was sincerely touched. He thanked for supporting the film and Andy. After our photo, he added, “that is an awesome tatt” and started back down the line of fans.

After finishing with the fans, he walked back past us and came over and shook my hand, thanking me again.

Thanks to donations the film has finished editing and has enough funding for it to be released and I encourage everyone to go see it when it does.

Cheers to a successful and heart felt encounter with Mr. Courtney. 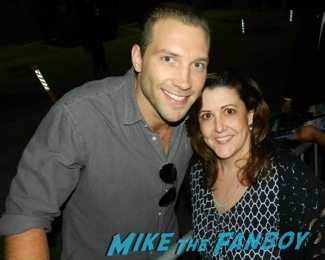