Give a God bless to Jessica Chastain. I mean seriously, she is one of the sweetest and kindest people ever. I had the good fortune to meet her a couple times and she still takes tim out her day to treat her fans right.

Not only is she one of my favorite actresses, she is extremely versatile. She can go from character work in The Help, to heavy drama in Zero Dark Thirty. It’s really amazing, I would love to see her in a romantic comedy because I think then everyone would see her sweet side even more.

Billy headed out to meet the star and has nothing but awesome things to say.

Welcome back to Billy Beer’s Bar Stool.  For the past few months I’ve been reading and seeing everyone’s posts, pictures and stories of premieres, Q & A’s, Star Ceremonies and airport visits for the amazingly talented Jessica Chastain.  If you can find anyone who’s ever said a bad word about this lady, they’re not from the planet Earth.  I really don’t know how she does it.  So many actors and actresses get burned out from just one award season.  For the past 4 years starting with “The Help”, Jessica has been promoting Oscar caliber performances.  Yet she still takes the time to take care of her fans.  I haven’t seen Jessica in I think a year.  I’m going through withdrawl!  I had heard she was doing a Q & A, and I felt it was finally my time to make the trip up to LA to see her.  I’ve missed enough events, and this should be low key so I can actually say Hi.  So as soon as I leave work, I’m on my way!

Seriously!!!!  This trip has taken 3 hours to drive from Oceanside!!  AGHH!!!!!  But I do Finally get there.  Well, what I thought might be a small event turned out to be about 15 of us.  A few more than what I was hoping for, but a lot of us are “friends,” so hopefully it won’t get too crazy.

A few of the people left for something to drink at 7-11 and all of a sudden 2 SUVs pull up.  You know, it’s kind of funny watching people running down the street with drinks and chili dogs in their hands.

Before the Limo even gets to the driveway, Jessica is already rolling down her window to say “Hi” to us.  This is normally when celebrities pretend to be on their phones.  A few people run up to the car asking her to sign immediately.  I understand sometimes this works and they get the people to sign,  but you’d be amazed how receptive celebrities can be if you make an organized line and don’t throw things into their faces.  Luckily the calmer portion of the crowd prevails and we tell her we’ll wait till she gets out of the car and we’ll line up.

Now I did mention there were 2 SUVs.  Oscar was following right behind her.  There were a number of people there with Star Wars items for him to sign (I personally had a poster for Inside Llewyn Davis which I thought he was amazing in!).  Luckily they both came over and started to sign.

Jessica first informed the crowd that they had both gone to school together and that he was amazing in “A Most Violent Year”.  Not sure I can count on even one hand the times an actor/actress started off with a compliment about their co-star.  Again, showing what a nice person this lady is!

Both of them started signing on the other end, and then Oscar made his way over to me.  He signed my poster, and then kept signing.  Totally forgot to ask for a photo cause I wanted to see where Jessica was.  She spent a while signing in one place and then finally made her way down.

Now since I drove a ways, I decided to at least get something nice done.  I normally don’t print 16×20’s but I found a picture I really liked, so I did today.  When she gets to me, I mention I had gone to a Q & A with Pacino and that he had a number of nice things to say about her.  She seemed happy to hear this.  Then she made her way down the line.  I had actually brought a couple of other  pictures to get signed.   One I’ve had for a while, and the other (which I WISH I could have printed 16×20 cause it’s amazing) was from Bazaar Magazine. 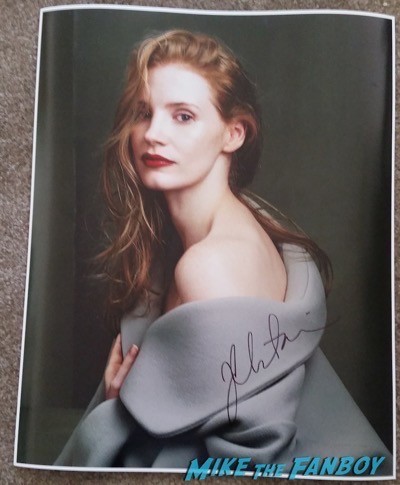 I hold them out, but by this time, people had already made their way to our side and she started telling people she already signed for them.  What I love about Jessica, is she is the nicest person in the world, and will make sure everyone is taken care of, but if you try and take advantage of the situation, she can flip a switch and go into Zero Dark Thirty Mode.  Where she’s still nice, but strict, and you can only agree with her cause she’s right.

Well, I was still hoping to get my other pictures signed when I told her I drove 3 hours to see her.  Then Anthony nicely tells her “He seriously drove 3 hours, is there any way you could sign his other photos?”  Then she was nice enough to grabbed my board and signed the two (THANK YOU ANTHONY!).

After she that, she told people she was done signing and would now take pictures.  She went back through the line and posed with everyone that wanted one.   Again, making sure all of her fans were taken care of.  After that, she had to go inside for the Q & A.  Not before saying bye to everyone.

It had been over a year since I last saw Jessica.  I am so glad she is still the person I have gotten to know as a fan over the years.  Well, back to Oceanside.  Hopefully the drive will be a little quicker on the way back!  Till next time! 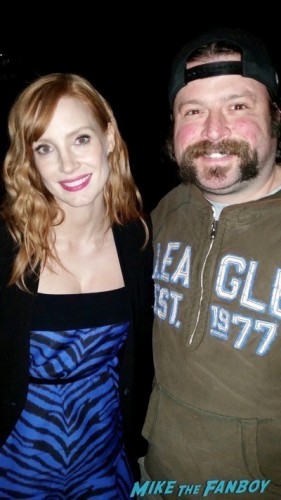