C’mon ’cause I know what I like
And you’re looking just like my type
Let’s go for it just for tonight
C’mon, c’mon, c’mon

Who doesn’t love Ke$ha? I mean seriously, I’m actually a huge fan an would have liked to meet her once again. I have a couple beautiful photos with her though, so I’m not complaining.

Billy Beer has been looking like a garden gnome for one reason and one reason only… He thinks Ke$ha likes beards. No lie.

Check out Bill’s wooley recap below!

Welcome back to The Great Graphing Outdoors with Billy Beered.  In case anyone has been wondering, YES I have grown a beard.  It has been a while since I’ve written some articles (have to keep that Fanboy Family status for all the great perks like getting to hold spots in line for Mike, getting magazines signed for Mike, getting invited to stand outside while Mike goes into Q & A’s, and lets not forget having your presence being acknowledged so he can make fun of you!)  Since most of you don’t read Mike the Fanboy articles and just hope and pray to see a Billy Beer article you might not have know about the facial hair.

Today we are off to see the judges of the new show “Rising Stars”  This would include Brad Paisley, Josh Grobin, Ludacris, and one of my guilty pleasures favorites Kesha.

I get to the location on the late side.  In fact I wasn’t sure if I was going to even make it.  Gotta love that drive from Oceanside during rush hour traffic.  I even pay for parking to make sure I don’t miss anything.  Good thing I did, cause 10 minutes after I got there, the first guest is leaving.

It’s Ludacris.  Now I had some Fast 6 posters I still needed him on, but I didn’t bring them cause last time he was here, he set the record for fastest celebrity to leave without even waving.  Plus if I would have stopped at home to get them I wouldn’t have been there on time.  Well this time he waved and then went the opposite direction.  Which was followed be a few words from the fans.  Then I believe the wind must have been blowing really hard down the alley, cause all of a sudden, he turned around and started walking our way.  Are You Serious!!!  Was he the nicest? no. 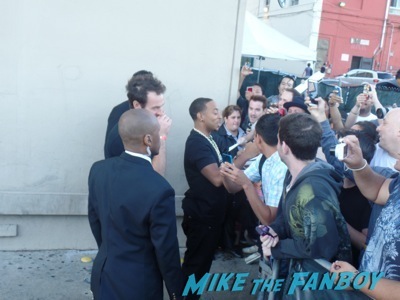 In fact the first thing he did was ask people how much they were selling his stuff for.  But he did come over, and took some pictures.  Amazing how you become nicer when you’re promoting a show.  Don’t get me wrong, I love Luda, Love his music, and he’s an entertaining actor.  Just not always the best to his fans.

As soon as Luda left, next up was Josh Grobin.  Again, I didn’t have anything for Josh.  I wish I had!  He came over and couldn’t have been any nicer.  I have only met him and gotten his autograph once before a couple of years back, and it’s nice to see he hasn’t changed.  I had heard he was getting harder cause some of his fans are a little out of control.  He signed for people who had stuff, and took pictures with anyone who wanted one.  I was up against a fence otherwise I would have tried.  One of the problems with showing up late.  After he took care of everyone, he was off.  It was like clock work, one leaves, then the next one comes. 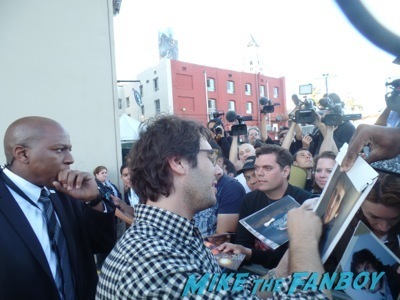 Here comes who all the Animals were waiting for, KESHA.  Last time she was here, she had a guard escort her to the people (I think cause she couldn’t walk a straight line)  This time she had a guard on each arm.  I think she’s loving being the Diva on this show!  She started off on the opposite side and started signing.  After hanging out there for a while, cause there were some people that demanded to have her attention the whole time, she finally started making her way down my way.  Right when she was about to get to me, she went back to the other side.  AGHHH!!! 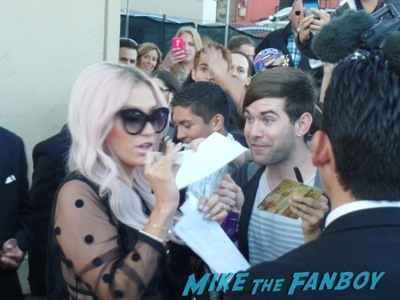 Finally, she made her way to the fence.  I call to her and ask if she could sign my Terry Richardson picture.  Since it’s a picture of her flipping the double bird I figured I should let her know I’m a fan of the photographer too.  She asks me for my name which as always I’m happy to give to her.  Billy with a Y.  She stands there for a while as she stares at my beard (it’s well known Kesha loves beards) and then keeps signing.  The funniest part was watching people not giving her a name when she asked, and then her just skipping them.  Really, you’re going to give up an autograph just cause she wants to personalize it? 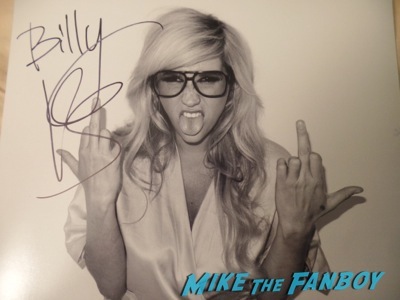 Anyway, I tried for a second, but it was already getting too crazy.  That’s alright, I got the one I really wanted.  I don’t stick around for Brad, cause I’m not a big country music fan, but I heard he did it and was also very nice.  Now off to go hunt some bears…..I mean beers.  Till next time.