Well, to be honest… I’m damn sleepy. But not Ms. Karalee! In fact, she just got to meet Ms. Teenage Dream herself Ms. Katy Perry! Say wha? But it wasn’t a super joyous experience!

Hmmmmmm… This is such an interesting topic, you get to meet someone and they are “nicer” to some fans over others. I get this sometimes myself, I’m a guy, I’m 6’4 so those are drawbacks for some reason. (thankfully, I’m also devilishly handsome as well… Swoon)

Cough… Channing Tatum… Cough… now he only likes to take photos or sign for girls. This is a new experience or revelation as of late. Well, listen I’ve been a fan since Havoc, but because I’m not a squealing fool it’s not the same to him or his people.

Sorry, I think I’m still bitter about that meeting and subsequent article. (cough… White House Down, bombed… Cough) I still like him, but I’m not letting him Channing my Tatum anytime soon… (well…)

Karalee had a similar experience with Katy Perry.

Check out Karalee’s lackluster encounter with Ms. Katy Perry below!

Like many, I’ve been a fan of Katy Perry’s catchy tunes for the past five years. They’re fun, bright and hard to ignore — much like the singer and her effervescent style. So when I heard Ms. Firework was appearing on a local talk show, I figured why not try and see if I could meet her.

When I arrive, there’s already a mini crowd, divided in two groups: the usual collectors and dealers on one sidewalk and a gaggle of teenage girls on the other. The latter is a bit out of control. They squealed every time a car drove up. Sorry, lassies, but Katy Perry is not being chauffeured in a Camry. I don’t care if it has tinted windows. Watching/listening to them made me a big proponent for year-round schooling.

It’s hot — like Texas hot — so I decide to go home and come back later. When I return, the “mini crowd” has now swelled to a large, winding line. 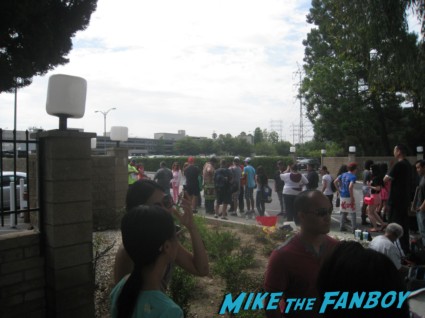 The teeny boppers have bopped over to the proper side of the street and we’re all now essentially single file, and waiting. 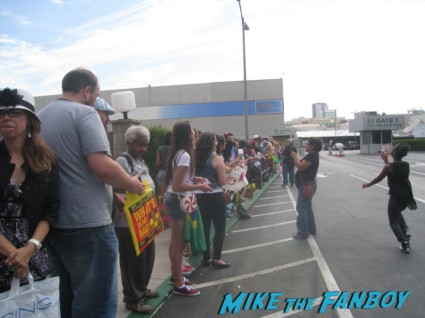 I appear to be the lone Fanboy Family member in attendance, though I do spot several familiar faces, including CB. He’s nice enough to invite me to join him and The Other Mike further up in the line, i.e. well ahead of Tiger Beat Central. The sun is beating down and the humidity is out of control — it’s like standing in soup.

Now the audience is starting to exit and several are joining the line. Awesome. Love when that happens. Said no one ever. The teens are still wide-eyed and reacting like jackpot lottery winners every time a car drives by. 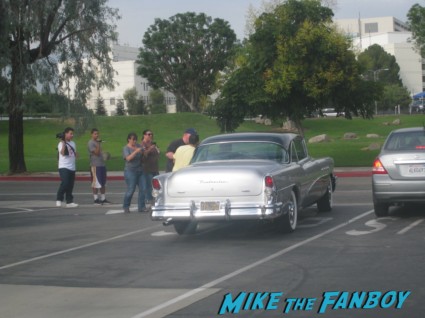 Waiting and waiting and waiting some more. So much times passes, some of the teens are now able to legally drink. Oh, wait — something’s happening. It’s one of Katy’s peeps and he’s talking to show security. There’s probably 100 people now waiting in a single-file line along the sidewalk. And it’s sweltering. Is she really going to do it? Or stiff us? Or only do half? CB is confident she will sign and greet everyone.

A little while later, someone comes out and informs the crowd that it will be another two hours before she exits. (Speculation is she’s inside doing interviews to promote “Smurfs 2.”) This does little to discourage the mass, with only a handful of looky-loos deciding to throw in the towel.

Well, perhaps they tell time differently among the rich and famous, because after 30 minutes (not two hours), here comes an SUV carrying the California Gurl of the hour. The SUV pulls through the gate, the back door opens and out comes Katy Perry. 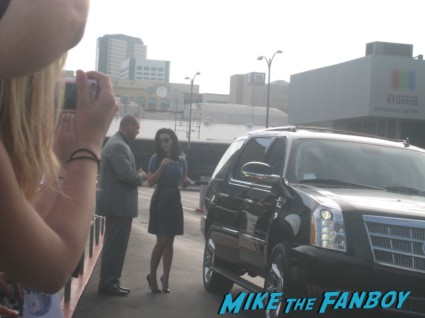 She states she will give each person one photo opp or one autograph; not both. She starts at the front of the line and makes her way down. It was interesting watching her engage with the fans. 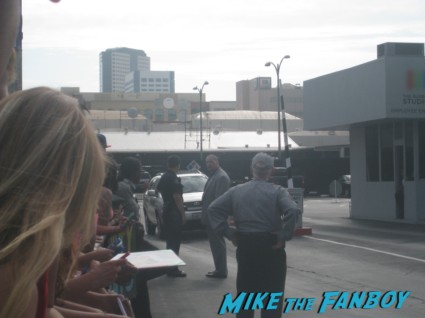 It could be just me, but in my opinion, she interacted with certain people differently. Those with boarded, glossy photos got a smile, minimal small talk and a graph. She wasn’t mean, by any stretch, but just not terribly warm. Perhaps it was because she had a super long work day, or the intense heat, or she worries the grapher will sell her photo for money. 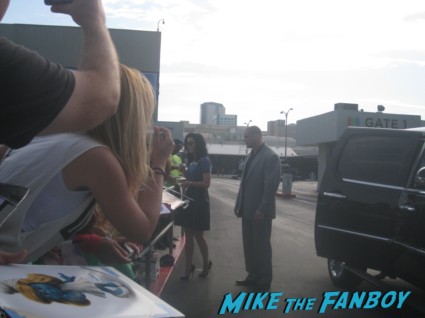 If you struck her as a “true fan” (not even sure what that means…I guess someone with a CD or a stuffed cat), she was on you like white on rice — smiling, laughing, lots of air smooches and small talk. Needless to say, Tiger Beat Central got lots of time with Ms. Hot ‘n’ Cold. 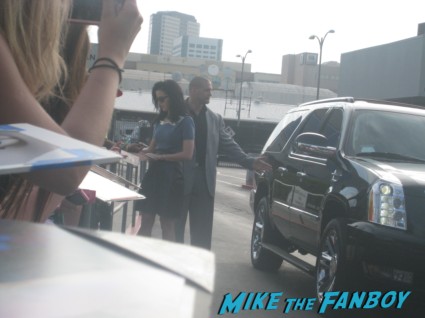 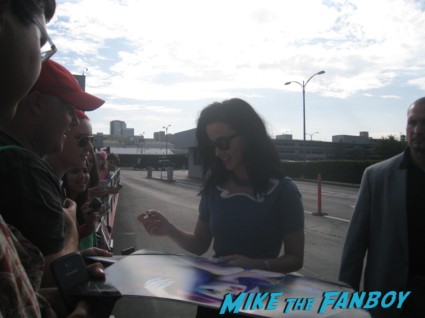 My moment with her was fine; I got my photo opp. But it left me with a feeling I’ve never had before in this hobby. 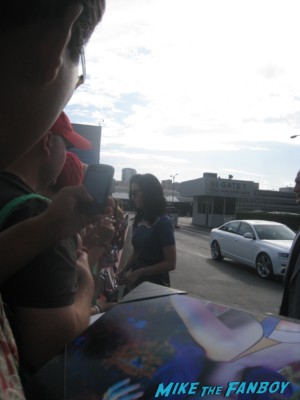 Again, to her immense credit, she stopped for the entire line — spending a solid 25 minutes signing autographs and taking photos. But she struck me as almost dismissive of many (including me) and over-the-top giddy for others. 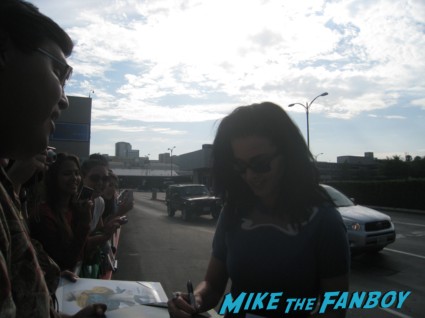 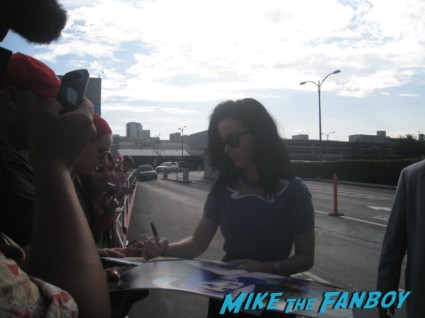 I’ve tried for several stars who simply didn’t stop or come over. That’s always a bummer, but this experience, for me, felt worse. Because the star you’re hoping for stopped, you know you’re about to meet them and then the moment leaves you feeling lackluster. Actually, you know what it was: I felt like a bother. 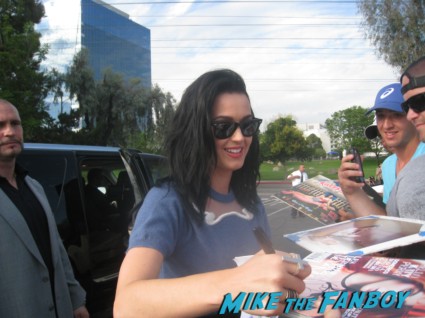 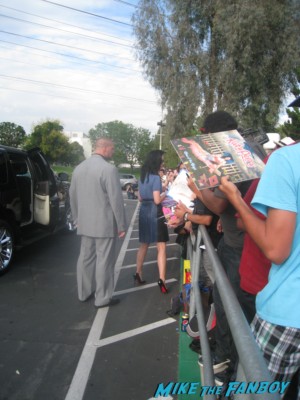 Again: She stopped, gave the crowd what they long waited for and that’s great. But I felt like I was in the way of her getting to her “real fans.” I don’t need you to braid my hair, but just because I’m not squealing like a ninny, wearing an airbrushed tee with your face on it, or weeping literal tears of joy, doesn’t mean I’m not a fan.

Does this mean I’m now less of a fan of her music? Absolutely not. I’m happy to add another photo opp to my collection, but will gladly let Tiger Beat Central fawn and fight for Ms. Teenage Dream’s attention the next time. 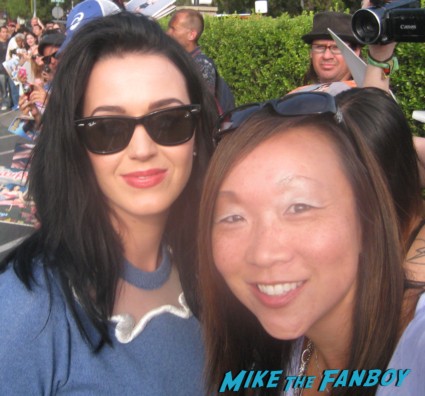