Home / Fanboying! • Stars of the 1980's and 1990's • Weeds / Meeting Martin Short (Finally!)! Greeting The LA Kings and Touching The Stanley Cup While Climbing On My Soapbox! Autographs! Photos! And Randomness!

You know there are those times when you say… “I’m not putting a lot of time into this because I doubt it will happen.” That’s what I felt like today. When I left my house this morning I brought my Three Amigos and Mars Attacks mini posters with me just in case I felt like getting rejected by Martin Short. Honestly, I’ve been a huge fan of Martin’s over the years, I’m Canadian after all so his time on SCTV, his character work and last season Martin was on the love of my life… AKA Ms. Mary Louise Parker’s show Weeds.

When I saw that Martin was taping a television talk show, I said… Eh… I showed up before when Martin was on and got rejected, do I try again?

6:45 p.m. – I’m driving and debating about what to do… Do I go and try for Martin Short or go home. And I shit you not… A bus drives by with a photo of Martin Short from Weeds on the side. It’s for the Emmy’s and it’s Showtime’s way of trying to get him an Emmy nod. 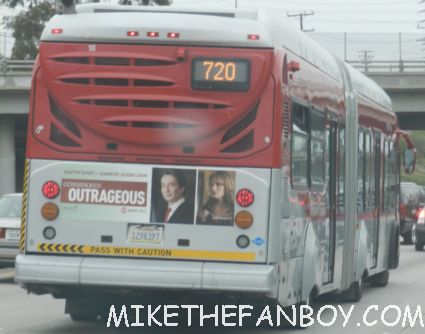 6:48 p.m. – The bus is still with me, I can’t shake Martin Short literally… Dammit I’m a sucker for a crazy sign. And in this case a quite literal sign. I have to try.

7:31 p.m. – I just parked, got my ticket and arrived. Sigh… I could bitch about traffic for a while but honestly there are only 10 people here so… I’m not worried. Apparently, Martin waved on the way in, nothing too exciting. 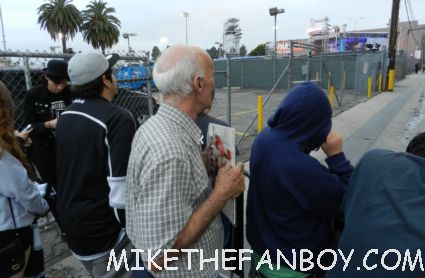 7:49 p.m. – Oh my God, Penner from the Los Angeles Kings is walking out with the Stanley Cup! He’s coming over and showing it to everyone and allowing us all to touch it. 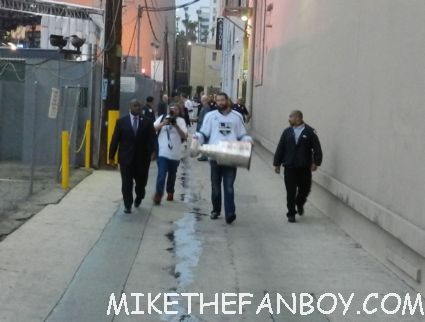 You know I have to be honest and I’m not a huge hockey fan but my Dad played for the Black Hawks in the minors. 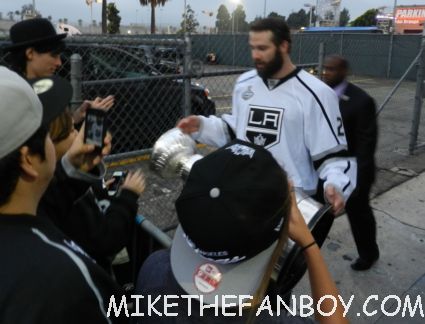 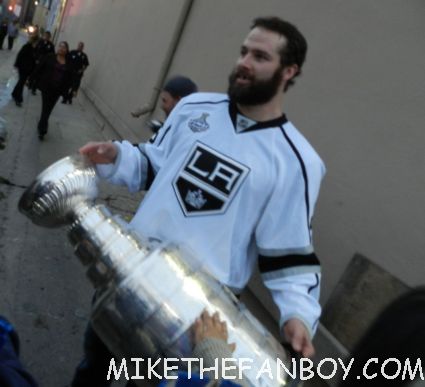 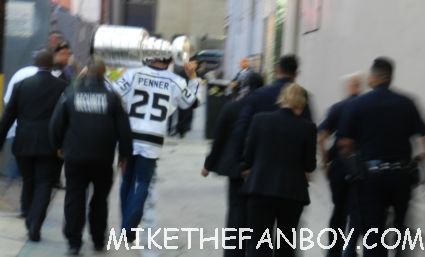 7:54 p.m. – A man just walked out of the parking lot with a mannequin of a small child’s body. Can we say creepy… lol… 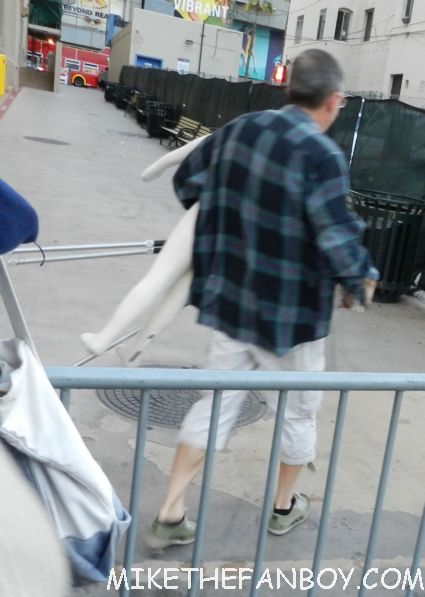 7:59 p.m. – There are some Kings fans here and they are saying to each other… “Should we go to the gate and watch the team leave… or wait here in case they come back..” I tell them, they all got on the bus, the bus is leaving why would they come back? Odd…. God bless them. So they take off to try and flag the bus down.

8:05 p.m. – And there’s Martin Short leaving! We all call for him and he gives a half wave and ducks behind the open door. Then I yelled there are only a few of us here. At this point there are only six people here and I think I see him motioning he’s going to come over. He comes, he’s coming. I’m shocked! 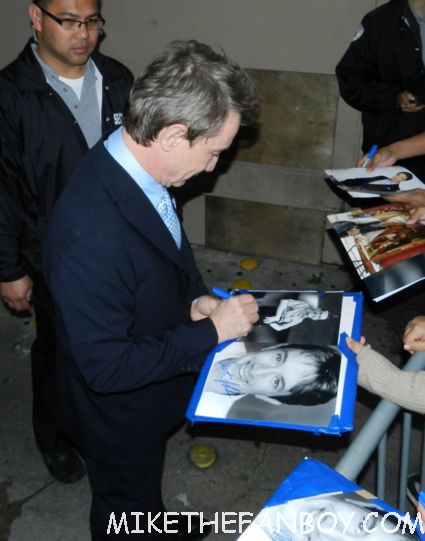 He comes over signs two for one fan, signs my Three Amigos mini poster and then switches to silver for my Mars Attacks poster. 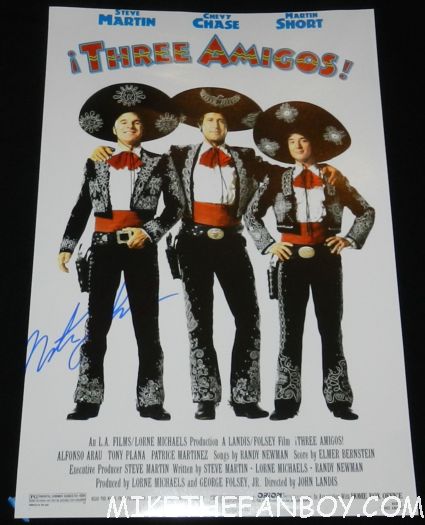 I asked Martin if I could get a photo with him and he says, “Well, you know… I don’t have time to do all this. I have a charity event to get to.” 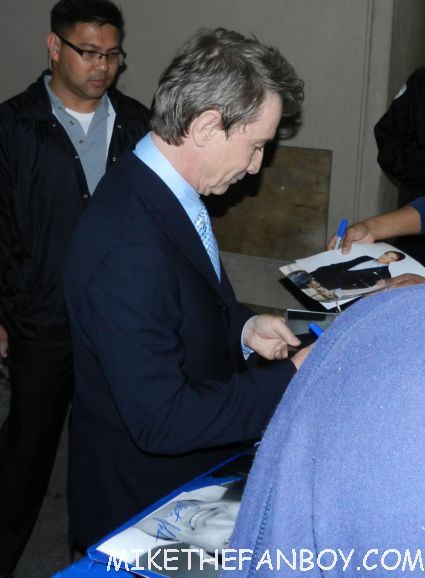 Then one of the mother’s who just ran up says, “not even for the kids?” and Martin says, “of course for the kids!” Martin signs for everyone and then takes a photo with the mom of the kids and one of the kids. 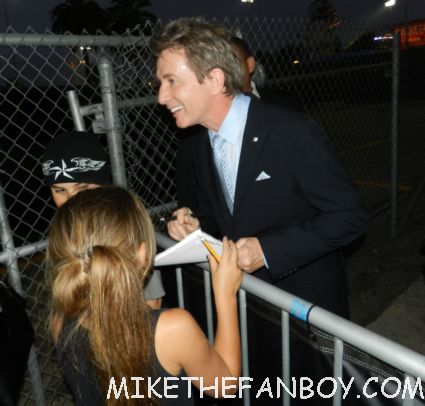 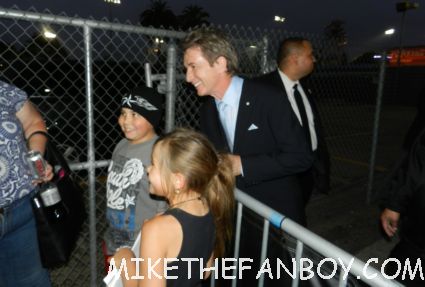 Now, I’m happy… It was great of him to come over, and The signatures are great. I just don’t understand something and maybe you all can help me out. Why would a celebrity like Martin Short who, let’s just say isn’t a box office draw by himself think that a 10 year old is going to know who the hell he even is? I mean… Parents use their kids to get something and celebrities buy into it because who wants to disappoint a kid right? But it’s the parents who pimp their kids out for an extra autograph, who make them stand there in the water, when they should have a childhood, when they should be behaving like normal kids. I just get so mad about all that crap. It makes the hobby of collecting autographs just gross. And it happens all the time. It’s not like those kids were even teenagers, he was 10. It didn’t tick me off until I started writing this, lol…. and I promise I’m going to climb off my soapbox… I just needed to vent for a hot second!

I’m jazzed though about Martin! I’ve seriously been a fan for such a long time, it was a treat to finally get to meet him. And even though I was rejected for a photo. I’m very happy.

What a random 45 minutes huh? lol… 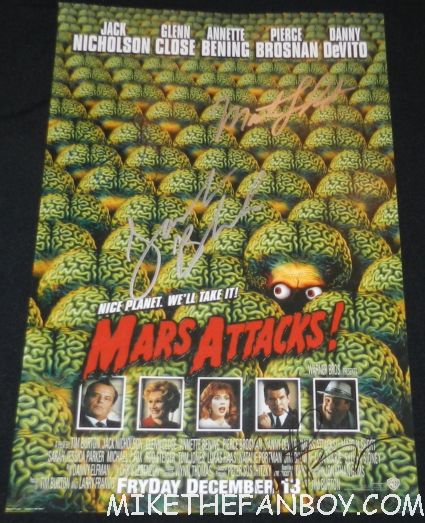