Home / Fanboying! • Film Festivals • Stars of the 1980's and 1990's / Meeting Legendary Actress Maureen O’Hara! On Her Birthday No Less! Jenna Travels To Idaho For Her Film Festival & Scores A Rare Meet & Greet!

One of the many things I love about our hobby is that everyone has their favorites. You all know mine by now, but if you really think about it, everyone who writes for MTF or sends in articles has their own. I love that. It’s what makes us all unique and I love it!

Jenna headed out to Iowa to meet one of her absolute favorites, screen legend Maureen O’Hara. For those of you not familiar with her work, she was in the original Parent Trap, Only The Lonely with John Candy, How Green Was My Valley and More!

Hey everyone, I want to say thank you for contributing to a great page and reading Mike’s blog daily. I’d like to share my fabulous encounter meeting one of my absolute favorites of all time, Hollywood film legend Maureen O’hara who was in so many great movies. I’ve aways loved classic cinema over the new films; The Parent Trap ( the original one not the Lindsay Lohan remake), The Hunchback of Notre Dame, and several other Hollywood films that are shown on TCM and AMC frequently are just part of this lady’s resume. I have been wanting to meet her for a very long time and I realized that it would be expensive since coming back from Ireland she settled in Idaho with her family. 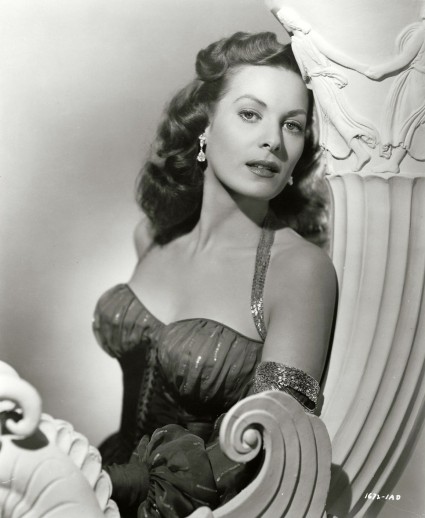 I recently had a huge fail with her. She was speaking in Iowa at the John Wayne Birthplace museum and since that was no guarantee of meeting her my friend and I failed to get to meet her. This time however it was confirmed that it was a guaranteed paid meet and greet. It is for her charity for the Justice Alliance for Vulnerable Adults (JAVA).

After getting the time off from work, securing my flight and printing my photos, I flew in on friday and walked around the city a little bit. It’s a very nice city. People were very friendly to me when I asked what places were great to eat etc. What do people do for fun? I guess dancing, and outdoor sports are what most Idahoans do. It does seem like a very family oriented town. Not like Mayberry per say but very warm and you can tell that people have been here all their lives.

Anyway, so Saturday rolls around, and it’s 12:15 in the afternoon and I have flowers for her and I am thinking I hope she’ll love them. Maureen Ohara’s car pulls up. She clearly is having trouble getting out and at 93 she has to use a wheelchair now to get anywhere. She was so beautiful getting out of the car and being strolled into the Egyptian theater (yes the theater is named that no joke) 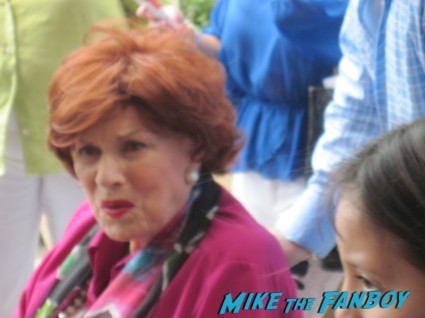 They are having a marathon of her movies being shown at the theater all day. But, I didn’t have a lot of time that day since my flight was an early one due to saving 400 dollars. A pretty good reason to leave early most def.

So the meet and greet starts. I’m not the only crazy one there who flew far away. People drove and flew from all across the country. She is an acting legend, of course they would. My turn comes and I approach the couch and I forget I put the flowers down, I run back over to the wall and bring them to her. She is clearly waiting for me. I approach and I sit down and I start telling her how I flew very far to meet her and I love her movies. She then asked

“Oh. Do you love my television work as well?”

I got flustered for a second and said yes I loved your work on What’s my Line. Whats my line was a game show back in the 50’s and 60’s where they had a mystery guest and the panel had to guess who they were. I had to talk very loud since she was hard of hearing. They were now trying to rush me. 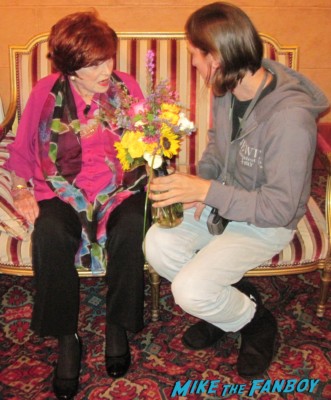 So I told her I came all the way from California. And she clearly loved that, telling me oh that’s far well I am from Dublin, Ireland. I thanked her for signing for me twice by mail and and that it made me so happy. By this time they were saying wrap it up, and I clearly wanted more time to talk to her.

We then took the photo and all I can say is it was worth the trip even though she wasn’t signing autographs. You had to pay more to get a signed book and there was an auction later that night at a dinner where I was able to grab a second photo with Maureen which will be coming to me soon. One of the best moments of my life meeting one of the greatest actresses alive today; the truly special and never ceasing to amaze me Maureen O’hara. 🙂 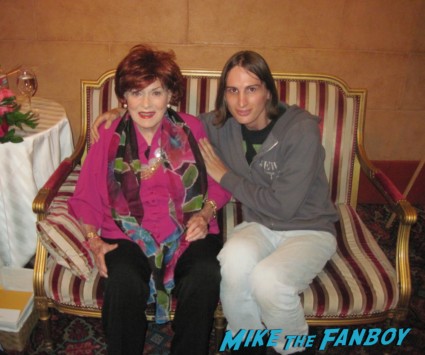