Home / Fanboying! / Chance Encounters With Mel Gibson! Meeting Garth Brooks! And Getting Dissed By Iron Mike Tyson! Paul Had A Heck Of A Few Days!

Oh my gosh!
Paul had a crazy couple of days!

First he had a chance encounter with Mel Gibson, which in and of itself is crazy, but he got to meet Garth Brooks but missed Iron Mike Tyson! Doh!

Crazy times in this hobby I have to tell you! You never know what’s going to happen in the City of Angels!

Check out Paul’s recap after the jump!

Hey alright this week has been a very strange! 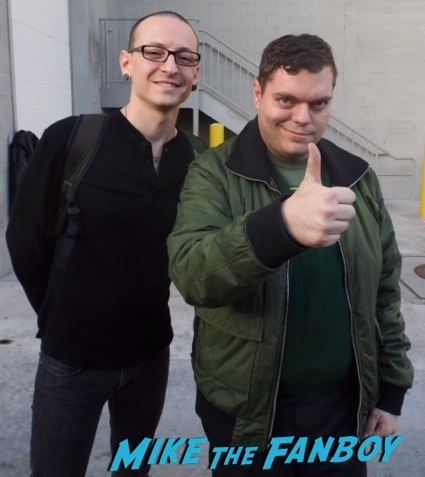 right after or before I couldn’t remember I saw Steve Aoki and a grapher buddy helped me call him over (been suffering from a sore throat) and he signed my edc program I was the only person there for him which is not surprising.

ok then about 5:30 mike Tyson arrives and goes straight in so does Casey afflack the only people there there for Casey were a family of tourists with Hollywood postcards

Ok day two I show up at universal blah around 11am expected a stupid crowd for both Tyson and garth brooks but again to my surprise only a handful of people so I end up trying to find a meal for under $10 that won’t make me sick (I have food allergies). I end up going to Johnny rotten rockets and spend $8 on a cup of coffee and fries (next time I’m bringing outside food) alright so after walking around a bit I walk over to extra and see the host Maria getting ready and she is super sweet and chats with everyone. Mario shows up right before the taping and likes to wink and point at fans I found it amusing but the taping was pleasant except for overzealous securitas minimum wage security guards but thanks to certain bloggers I was warned in advance about these clowns so I challenged this guy by pulling out a blue sharpie for Tyson to sign with and the guard rushes over to me “black or silver only” and I’m like “ok why?” The guard then goes “the guests prefer those colors” I respond with “I’ve been been doing this for about 5 years and they really don’t Care” 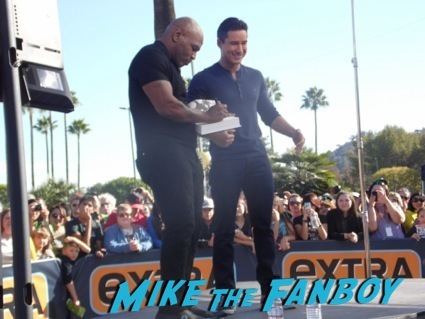 There are a healthy amount of fans there they do the interview and mike walks down and stands in front of the crowd he looks exhausted and decides if he wants to sign so he starts signing and the dealers start shoving and acting stupid so he signs a about a dozen things and since security is more concerned about pens than doing their job he is diverted by Mario Lopez to his escalade and signs a few more (not mine bah) then leaves to do another talk show but a pal of mine gave him a photo she took a few years ago which is awesome.

Next we wait for garth brooks who is scheduled at 4pm

Now I grew up in the late 80’s in central Washington state and garth brooks is a god in that part of the world so I was very excited and had a personal story involving him about how my mother threw him out of the emergency room at 1am when his bandmate broke his arm because it was past visiting hours and she had no clue who he was and didn’t care (she’s a hardcore bowie fan & now running the Glendale philharmonic shameless plug) so upon Garth’s arrival he shook hands with everyone in the front and chatted including me who got to tell him the story and he remembered her!

So the interview started and it was much fan friendly than Tyson then garth got off stage and started signing then realized how big the crowd was 100+ people and unexpected he went around the barricade and got in the crowd and started signing for everyone and being amazing I loved when dumbass guard said no pictures and only one thing and he laughed at the guard. 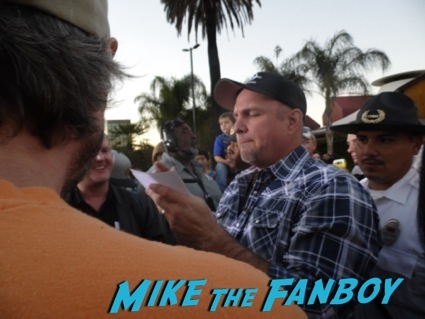 Garth was super awesome and I got my press photo of him being interviewed by magic Johnson signed and several pics super class act (for the record names were left out on purpose). 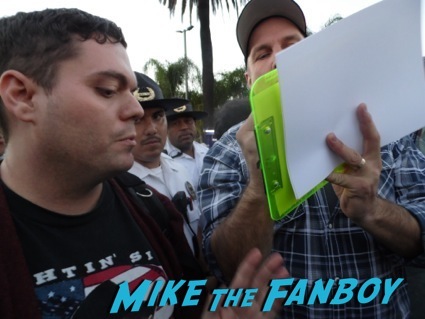