Apparently, I suck as bad as I think I do at coming up with fun titles. Sigh… So, Jim had a fun idea and that to let you guys try and come up with a cool title for his comic book column… So…

What do you guys think? Send me some suggestions at Mike@mikethefanboy.com or leave them in the comment section!

Hello Comic Book fans! I’m back for week 2 of the Comic Book Rundown…. Is that a good title? How about this for a contest the reader that comes up with the best name gets a free digital download of the new Guardians of the Galaxy comic, issue #6. It looks to be classic so deep deep True Believers.

So this week was a fun one for those out there that love comics. None other than Pulitzer Prize winning author Michael Chabon was in town to promote his new paperback, Telegraph Avenue, and conduct a Q&A and a meet & greet with his fans. Some may know Mr. Chabon from Wonderboys or The Amazing Adventures of Kavalier & Clay or how about his screenwriting credit on Spiderman 2 and finally his multiple comic book credits.

He is most definitely one of us. The event was well attended and he seemed to have a blast with his many fans. Mr. Chabon attended the University of Pittsburgh so there was a lot of the old “back when” talk. Some interesting topics that were discussed were that he had contacted Ron Moore to offer his services on Battlestar Galactica, how awesome would that have been? Chabon doing an episode or an arc on one of the greatest sci-fi shows ever? 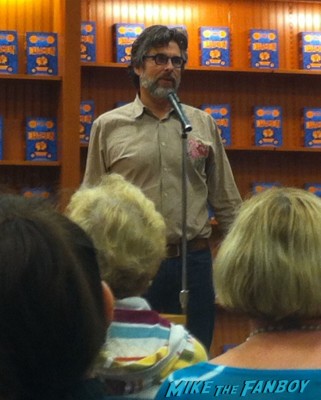 He also briefly discussed that he was going to be doing a short story in the back of Matt Fractions new book sometime in the near future. If you’ve never read his stuff shame on you, go out right now and pick up Kavalier & Clay. I wouldn’t lie to ya, it’s awesome. After the Q&A was over he did a signing that took forever. He spent so much time with each fan it was borderline painful, until it was your turn anyway. When it was my turn we took a picture 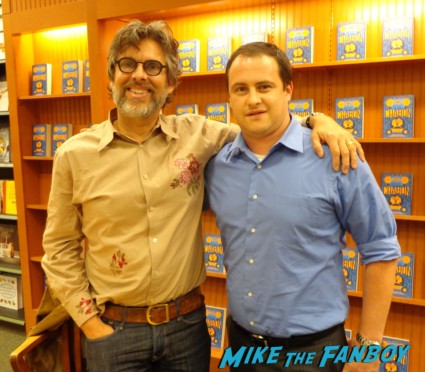 and talked comics for a couple minutes as he signed 2 books and 2 comics. What a fun experience. 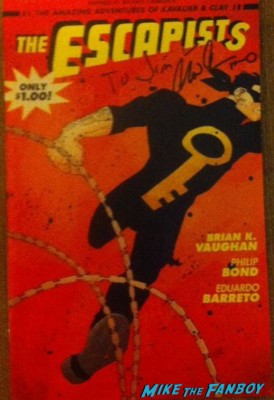 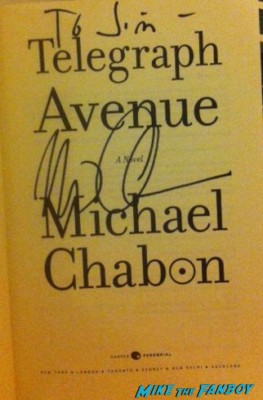 Now on to this weeks comics.

There were a lot of books that came out this week. 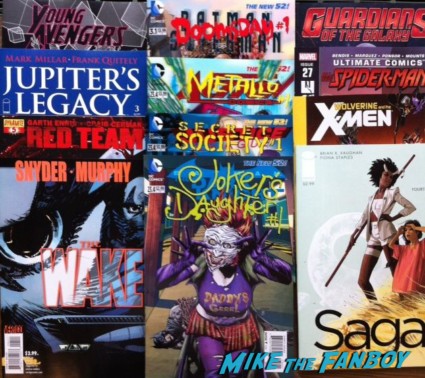 I actually spent $38 on 12 comics, don’t tell Amelia. So DC is still way deep into the Forever Evil story-line and it’s been pretty good to date, this week have Doomsday, Secret Society & Metallo but the big one that has all the speculators running to the shop is the Joker’s Daughter. 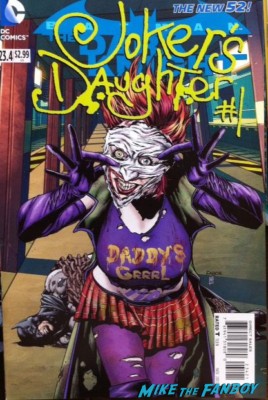 No one knows much about her so far but it’s most definitely a fun idea that’ll have a major impact on the world of Batman, especially after Batman’s son was killed in action not too long ago. The first appearance of the Joker’s daughter was in last months Catwomen book and since this was a book with a small print run it’s demanding more than it should on ebay.

Another book that has been a fun original story that came out this week is Saga.

Some may remember a couple months back when there was a big stink in the papers because of the gay sex act going on in the book. It was so subtle that I didn’t even notice it the first time I read the book and only knew about it because of the news. Thanks for the free publicity and making my copy worth 5 times what I paid for it. So this is a book written by Brian K. Vaughan, some may know him as a comic writer others as the showrunner for the hit TV series Under The Dome. Either way I would highly recommend picking up either Saga or his other masterpiece Y-The Last Man. I’m shocked neither books have made it to TV or movie theaters yet, someday.

Well that’s all for this week now get out there and buy some comic books already!!!

PS don’t forget about the contest…..