Home / Fanboying! • The Lovely Erica / Michael Fassbender Awesomeness! Erica Says The Sexy Star Deserves To Be In The Hall Of Fame For Being So Nice!

Sigh… Erica has met Michael Fassbender yet again… Mike the Fanboy… Zero! Doh! I keep hearing how awesome he is so hopefully, that will continue! Elisa and Erica were on the cold streets of New York to meet the Prometheus star!

And I’m happy to report he was awesome as usual!

The trailer for the film destined to be one of the biggest films of 2014 debuts on Tuesday. Yes, we’re going to see both casts of the X-Men movies united in X-Men: Days of Future Past!

While in NY for New York Comic Con, I started a poster for this movie with an insanely large cast. Insane task, isn’t it? But at least I got it started with 3 signatures in one weekend! The first was with Big Apple Elisa who managed to alert me that my favorite guy, Michael Fassbender was still in town even though I just missed the 12 Years a Slave premiere. Yeah! So I packed some stuff, re-arranged my Broadway plans and met her in NY.

Elisa and I grab a spot on the “L”-shaped barricade and we all line up as Michael is running late. So late that I’m not sure he’ll stop, but Elisa is convinced that he’s so nice that he definitely will.

About 5 minutes before he’s supposed to start his press stuff, a car pulls up and we can see Michael sitting up front next to the driver. He gets out with a smile and heads over to quickly sign. We just miss him since the barricade is “L”-shaped and he can’t quite see us. Uh oh! 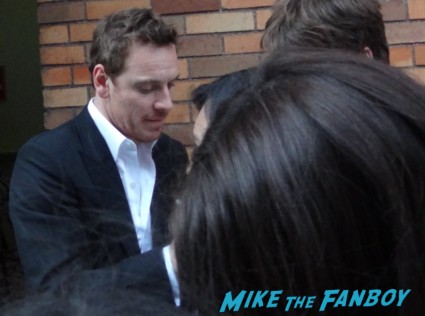 However, he finishes up at the far end and calls out “Does any want any more signatures before I do pictures?” I have my hand and call out “Over here, Michael!” and he comes on over. Whew!!

He ambles over and I have my Korean GQ magazine and the sentinel X-Men: Days of Future Past poster ready for signing. He is a bit surprised at the Korean GQ and I mention that it’s a favorite and had to chase it down (4 magazine stands and then 3 books stores in Koreatown LA). He nods and replies “it’s a cool one!” 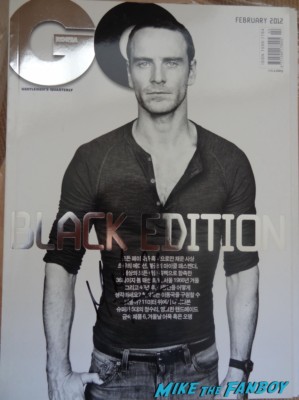 He then looks at the poster and asks “What is this?” He reads the text at the bottom and then says “oh!” and nods as he signs that. I tell him that it’s his “call to arms” and he laughs. He’s taking his time and adding little “xx” to his signature. Kisses from Magneto! (Not complaining!) 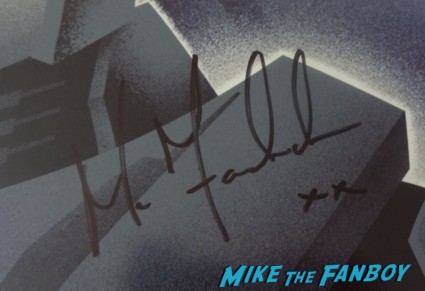 He signs Elisa’s 300 one-sheet and an X-Men: Days of Future Past poster (he’s doing the Michael Jordan tongue thing!) and is now ready to do pictures. 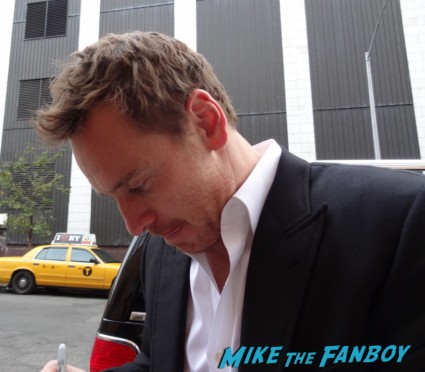 The girl on the end is obviously really excited to see Michael and calls out “MICHEAL!!! Do you remember me from the premiere last night?!?!” He nods and politely says yes as she wants another picture with him. She sort of grabs him and her friend takes the picture – there’s a very long pause as the girl doesn’t want to let go of Michael. (Poor guy!). The picture-taker says “OK, I think I got about 4 photos…” (!!!!)

There’s a bit of an uproar as now he’s REALLY late and the publicists need to get him going and everyone else wanted pictures as well. He promises he’ll do more after he’s done with his press obligation. Love him! After he finishes up, he starts the pictures at the other end of the barricade. The girls with the GQ magazine have broken open the barricade so they move to stand next to him for their pictures. (!!!). As he’s waiting for them to switch out, he sees me and quickly flashes me a brilliant smile that knocks me back since I wasn’t expecting it and, well, it was a full on shark smile with all his teeth. As Karalee would say: “not ugly.” (sigh!)

He finishes up with everyone and comes towards us. 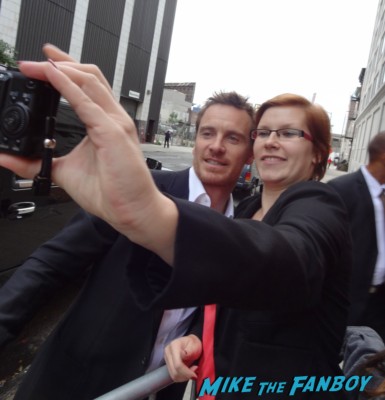 Michael gets to us just as my camera chooses to crap out. Ah! He points to Elisa’s camera and she moves to turn it on. While we wait, I apologize for taking up his time and crack a joke which gets a huge belly laugh out of him! I’m a bit startled by his laugh, so I get a picture with his full, brilliant smile, but I’m shying away from him! (I’m really not – just surprised!) 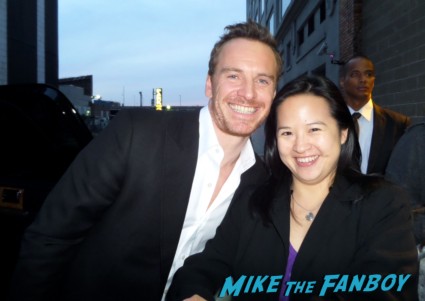 Elisa gets her picture and then the fanatic from last night’s premiere tries to get more pictures. Michael is having none of it though, and heads back to the car and tells her “oh no!” and then gets back into the car.

So there you have my nominee for Hall of Fame fan-friendly 2 years in a row! Michael made sure everyone got a signature and a picture (or 4 if you’re the girl on the end!), but is a bit intolerant of people who abuse his kindness…entirely reasonable. Another lovely encounter with Michael (swoon!) and a great start towards next summer’s big blockbuster! 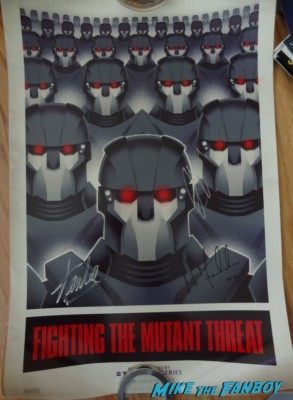