It’s always great to hear from Chuck our man in Texas!

He’s a huge SOA fan, just like I think all of us here at MTF! he headed out to Mad Monster Party Gras to meet a bunch of the cast! Ron Perlman, Drea de Matteo, Tommy Flanagan and more were on hand at the event.

And let’s all wish Chuck a big MTF happy birthday! September is the best month for birthdays! 🙂

So I found out about this show about a week before it happened! I saw where several cast members from SOA were appearing, so I decided to attend at the last minute. Besides, it was my birthday on Sunday, so I decided to treat myself for my big day! Over the course of the week, I was really disappointed to find out that Theo Rossi, Mark Boone, Jr, and Kim Coates all dropped out. But hey I was still stoked to meet Ron Perlman, Drea de Matteo, and Tommy Flanagan.

I left on Friday afternoon, and drove to New Orleans. It tool me almost 7 hrs from my house, due to traffic, etc.

I checked into my hotel, went and got a steak, then settled in for the night.

I got to the convention at 10:00am on Saturday morning and found out the SOA peeps would not start signing until 1pm. The doors opened at 11:00, so I went to get a photo op with Drea de Matteo, and her table was empty.

I talked to her agent who said she would be down shortly. When she finally came down around 11:30, she was not a happy person. She did not look like she wanted to be there. Since I already had her signature, I just needed the photo op. I took several pictures with her, and thanked her. Not a big deal. 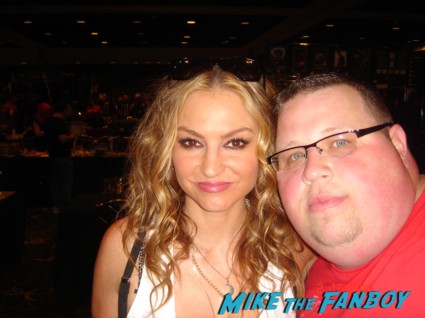 I looked up and saw Tommy Flanagan walking through the convention, and nobody else recognized him. I ran over to him, and got a cool photo with him. 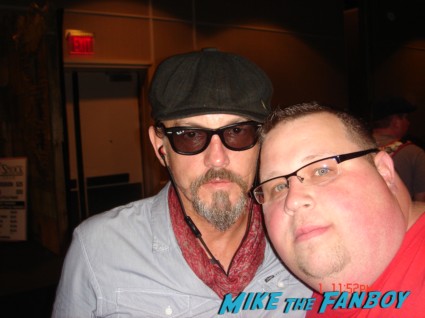 I told him I would see him at the panel, and he thanked me. I then went up to the SOA panel room and listened to Ron, and Tommy for about 30 minutes. They were cool joking around and having a good time. Drea looked like she wanted to be anywhere but there.

When I came back down from the panel room, I bumped into former WWE wrestler Papa Shango AKA the Godfather by the elevators, and got a quick photo op with him. 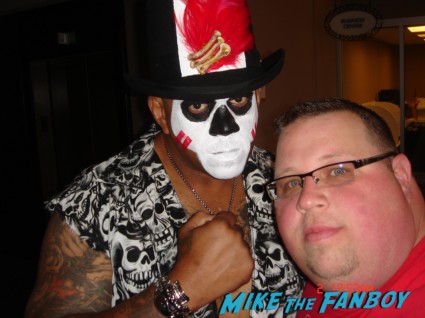 After that, I went back into the convention and got in line for Ron and Tommy to sign. It went pretty fast, so I was happy about that. I told Ron it was my birthday on Sunday, so he stood up to take a picture with me, instead of just across the table. I thought that was pretty cool on his part! He thanked me for being a fan and coming to see him. 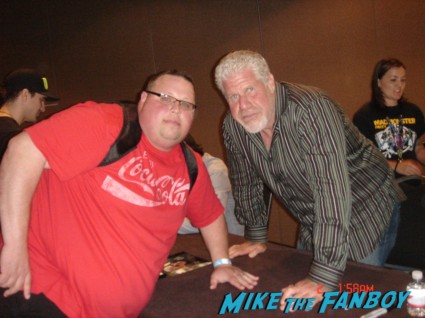 I met Tommy again, and he fist bumped me, and told me it good to see me again.