Home / Fanboying! • Karalee • Stars of the 1980's and 1990's / Meeting Russell Crowe! Karalee Scores Herself A Gladiator! And A Man Of Steel To Boot! Photos! Autographs! And Overall Hotness!

I think that everyone here at Mike The Fanboy is a huge fan of Russell Crowe. I just like him. He’s a cool guy, I enjoy his films, he’s seriously a cool guy.

I had a fanboy fail trying to get to this event and meet Mr. Russell Crowe. What happened… I arrived just after Russell finished! Big giant DOH! However, the stunningly superb Ms. Karalee was on the scene!

It was just another day stuck in L.A. traffic, grappling with one’s soul, making deals with the devil, all in an effort to nudge the bumper-to-bumper cars along the 405 to a glacial pace. My phone rings and it’s Billy Beer, telling me that if I have any interest in Russell Crowe to get my tookus to a nearby talk show studio ASAP.

The quick back story I received went something like this: When Russell pulled up to the studio, he was met with a gaggle of fans, collectors, dealers, etc. all hoping for his autograph (he’s currently promoting “Man of Steel,” the new Superman film). He told the assembled mass that he would sign on the way out and that they needed to line up and be ready. Essentially: No orderly line; no Russell sign.

I was about 20 minutes away. Given that the studio is around the corner from my casa, I figured, why not? If I get there in time to snag a quick pic with the Gladiator, cool. If not, no bigs. Traffic finally starts to clear (I’m now going 35 mph…yay!) and I make my way to the studio.

Parking proves difficult as all the nearby streets are filled. I see the line and it’s monstrous. So. Many. People!

I circle a few times and finally find parking a few minutes away. I make my way to the line and by the time I walk up, I’m at the very end of the barricaded line, spilling on to the sidewalk. I’m very lucky to have made it when I did because even though I’m essentially at the end of the line, I’m still front row. I’m a little concerned security is going to make me move to keep the walkway clear, but thankfully that doesn’t happen.
I see Billy and Susan and a few others at varying points in the line. Honestly, the crowd line was so long — and about five people deep — I’m starting to wonder how crazed it may get when Russell comes out. And then wonder if he’ll actually make it all the way down the line, i.e. to me.

I don’t have long to sit with my deep thoughts as an SUV comes through the gate, stops, parks and out hops Russell. 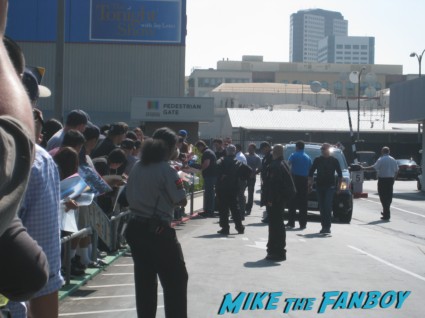 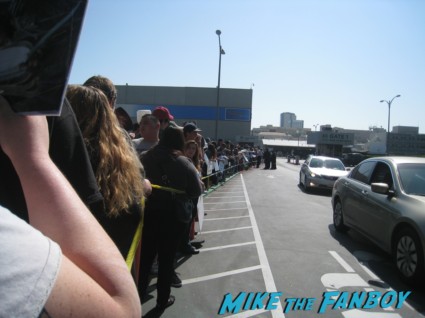 True to his word, he greeted the line and started at the far end and signed for everyone. 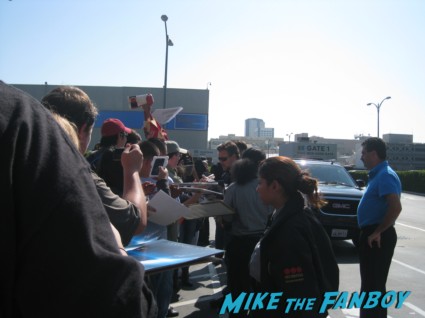 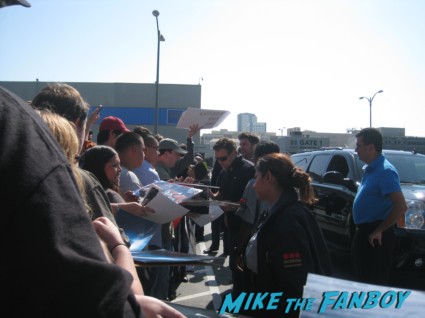 I then saw him pose for a few pics but could tell it was one or the other: an autograph or a picture. Clearly, yours truly is going for the photo op. 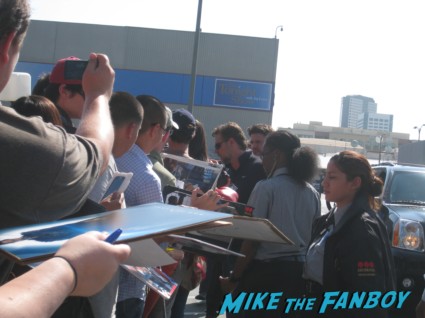 There are two nice girls from Dallas next to me (they were part of the studio audience). We agree to take pics for each other. Much to my relief/delight, Russell signs and signs, and signs some more, all the way down the line and finally makes his way in front of me. 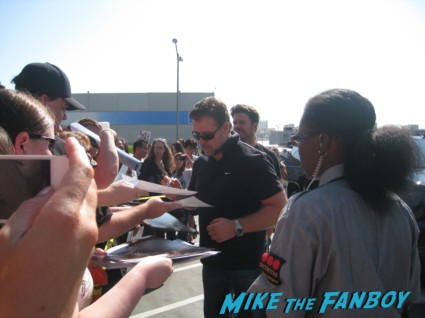 “Could I please get a photo with you, Mr. Crowe?” I ask. He responds, “Yes, of course. Thanks for waiting.” One-half of the Dallas duo snaps the pic and then I return the favor for them. 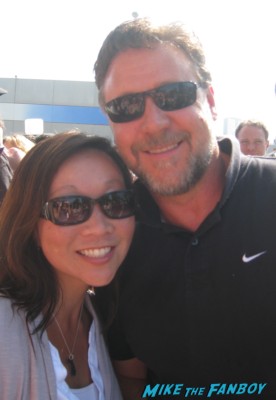 He finishes down the line and then hops back in the SUV and he’s off. He probably spent a solid 10 to 15 minutes with his fans. 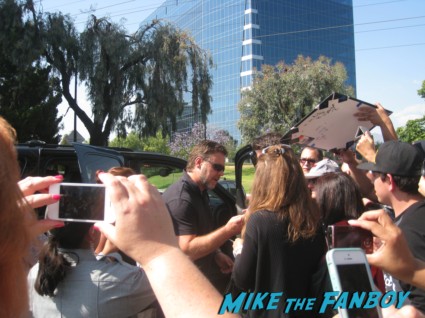 I have to say, I’m sure all the reports of his fiery temper, curse-filled rants and phone-throwing antics hold truth and weight. But on this day, he could not have been more generous with his time or more cordial with his fans.