Billy Beer… He’s a crazy one.

Billy, headed to an advance screening of Divergent which benefitted a charity that Shailene Woodley supports called All It Takes. There was a cast q and a, screening of the film, and a reception.

Check out Billy’s Diverging (Sorry, had to try and work in a pun somewhere!) recap below!

Welcome back to Billy Beer’s Barstool. Since Mike is out doing favors for my sister (yeah, she got him working for her too!) I figured the least I owe him is a new article. I’m sure a number of people are all excited about the movie Divergent. They just had the Big Hollywood premiere. I heard it was crazy, but a lot of people had good luck.

Well, since I’m working a bit away, I instead went to a private screening the day before to help support All It Takes, a camp run and supported by Lori Woodley, Shailene Woodley’s mom. It helps teach young children about leadership and confidence. One, I thought it was a great cause since I went to a similar camp when I was growing up. Two, it was a great chance to see the movie before it comes out. Finally three, a number of the stars were going to be there, and I was hoping to get some cool pictures and graphs for my collection. I have a feeling this movie is going to be a big deal!

When I get there, there is already a long line formed. I walk in line to get my ticket for my spot in line, but they instead just let me into the theatre. Not gonna complain about that. They must know I write for Mike the Fanboy!

I sit down and find a nice spot in my assigned section and wait. After everyone was there, they did an intro talking about the camp, and had a number of the young campers come up to speak to the audience. Which I thought was a testament to the camp itself for these kids to be able to speak in front on a theatre full of people.

Next Shailene Woodley came up and introduced a musical artist who played a song for us. Finally, Theo James was introduced and he started the movie.

I don’t want to ruin the movie for anyone that hasn’t read the book like myself. I really liked it. I know it’s being compared to the Hunger Games. I would say the similarities would probably be that the movie was entertaining, but I have a feeling they had to smush a lot into 2 hours, and the book is probably amazing!

Afterwards there was a Q & A. I won’t bore you with all the questions, some of them were entertaining, and others were not so much. When it was done, the cast was led upstairs. It was kinda odd there wasn’t really anyone rushing the stage for autographs like there would be at Paleyfest. 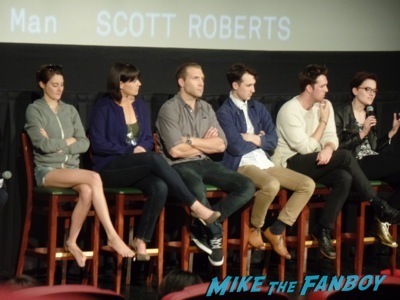 After the Q & A, they had a reception for people who donated a certain amount and you got to hang out with the cast. When I walked up, I got stopped at the door cause of my bag. I had individual pictures for everyone to sign and a poster, but I was told I could only bring in one or two things. As much as I was disappointed, I also understood. Maybe afterwards I can get my other things signed.

I started in the area where the guys were. I wouldn’t mind having them sign my ticket, but I had personal items for Shailene Woodley. So I switched directions, and headed over there. Well to no surprise she was quite busy. Her hometown was only 10 minutes away, so there were many family members and friends there for her to entertain. On my way to her, I notice Veronica Roth there, and patiently waited to meet her. She was very nice, and signed my ticket and took a picture. 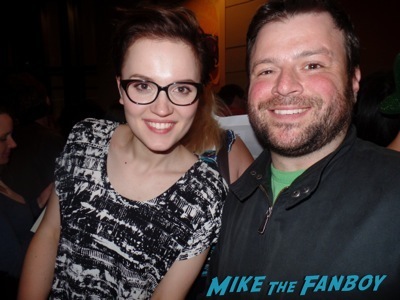 It’s now taking a while to get to Shailene Woodley cause everyone wants to see her. Since a lot of the people there are children or obviously friends and family, I understand and patiently wait. She’s told many times it’s almost time for her to go, but she keeps going. Finally I get up there, and she signs my stuff. I ask for a picture and she does it without hesitation. Because things were starting to move fast, I was unable to tell her to hook me up with Brie Larson 🙂 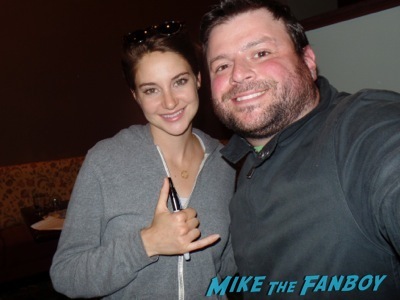 After that I went outside. I was waiting to see if she would sign more on the way out. After waiting a while, I notice she still hadn’t left, so I went back upstairs. She was still up there talking to fans and taking pictures. I wait a little more and ask for another picture since I didn’t really like my first one. (Sorry, I’m picky, especially with all my photo flops!) She does it again, and then moves on to the next one. OK, I don’t want to bother her up here anymore. I go back outside and wait. There were a few graphers there, and when she did finally come out, they rushed her to the SUV. Oh well. At least I got a few good things and got to see a great movie!

Time to get back to my car and go back to Oceanside. Are you kidding me! There’s the SUV dropping Shailene Woodley to her car parked right by mine. UGH! I don’t want to be that guy! So I wait till she drives away and then go to my car. No Happy Hour for me tonight, I gotta drive 100 miles. Till next time!!!