Home / Fanboying! • James / Simon Pegg Goodness! James Meets The Shaun Of The Dead Star On The Set Of His Movie Man Up!

I have to tell you, I love Simon Pegg. I’ve loved him since I saw Shaun of the Dead in theaters back in the day. He’s always been hysterical and has made some amazing films over the years, Hot Fuzz, Star Trek, The World’s End, Paul, etc…

James was out and about and ran smack dab into the filming of the new movie Man Up! Guess who it stars? Simon Pegg! LOL…

Here’s a nice short one from me today. After work on Wednesday I went to see Emil & The Detectives at the National Theatre (great play!) with my friend Helen. Afterwards as we were on our way back to the station, what should we come across? None other than Simon Pegg and Ophelia Lovibond filming Man Up!

I’ve always wanted to see a film being filmed, and with one of my favourite actors was a bonus! Only saw one scene doing done (over and over), but when it comes out at least I can say “I was there!”. It was a quiet location too, so there was no one else watching.

Afterwards I asked Simon for a photo, and despite being in costume he agreed! Awesome way to end the day! 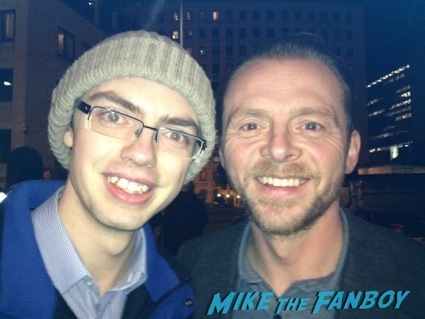