Scotty and I are about and out… Scratch that… reverse it. Scotty and I are out and about for Lost in Translation and The Bling Ring director Ms. Sofia Coppola. Now, I have to tell you, Lost In Translation is one of my favorite movies of all time. It’s amazing and the acting is incredible. I’m also really excited for The Bling Ring. I think it’s the perfect film for Sofia to direct and write.

Needless to say, I’m a fan.

Now, I wasn’t able to get Sofia at The Bling Ring premiere the other night so I was thankful to find out that she was doing a rare q and a and… best part of all… It was near work. What no nervous breakdown trying to navigate my way out of Santa Moni-Hella?

I met up with Scotty and headed over. We grabbed some food, caught up, had some chips and salsa and headed to the theater.

Scotty is walking down the street and literally we are the only ones waiting. 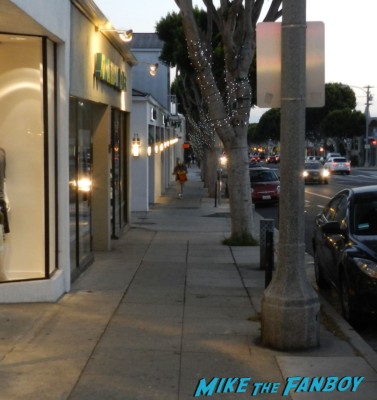 Now, Sofia was nice at the premiere but I’ve never seen her out and about so who knows what to expect.

I was testing my Gold and Silver Sharpies and look a cast signed poster of The Host. 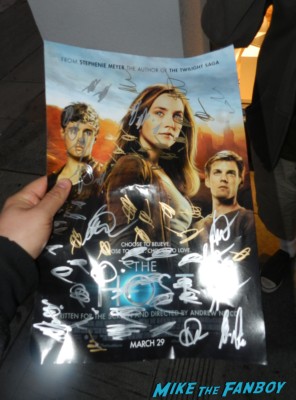 I kid, I kid… Test your pens people. It’s important!

Scotty has his Marie Antoinette cd cover and a photo from the current issue of W Magazine with Emma Watson on the cover (hot!) I have my The Bling Ring mini poster I got signed at the premiere and my Lost in Translation promo picture disc of the soundtrack. I already have Anna Farris on it. 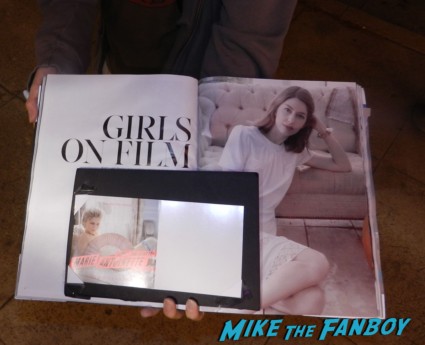 A few more people have arrived and it looks like they are setting it up for a photo opp under the marquee. However, Sofia is running late.

Jack is inside the screening and we’re outside. The Fanboy Family has this event covered inside and out. Oh God, I’m a dork. I know it, I understand it. I live it. And fuck all who cares!

There are a couple other photographers here as well. However Sofia’s people are telling them that they are late and can’t stop for the photo. Well… you know that means we’re screwed too. Her publicist told us as well that she couldn’t stop but possibly after the q and a. She was nice about it and Jack just texted me that the movie was over so yeah… she’s late! 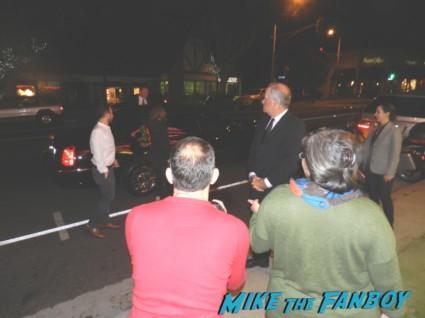 She comes out an we all ask if she can sign after, she says, “Why can’t I do it now?” 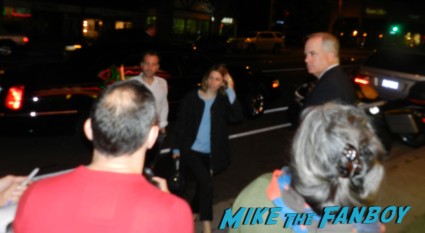 Her publicist grabs her and says we have to go inside the movie is over. Ah well…

So we continue waiting… I look over and see Scotty in all his glory. The boy is wearing floods! I’m now obsessed. 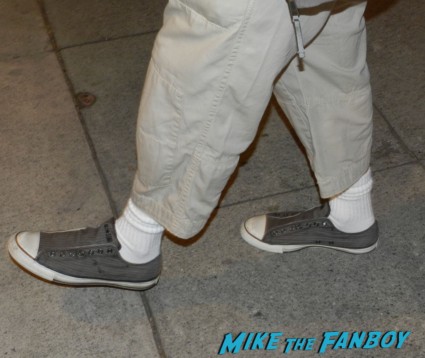 I hear they are called Clam Diggers (that’s what Scotty claims but we’re not at the ocean and there ain’t no damn clams here!) I’m teasing Scotty but he had a “dress up day” at work so he has an excuse. 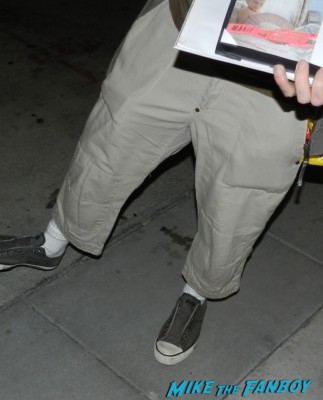 I snap a quick photo and I’m teasing him because with his hood over his face he looks like the evil queen in Snow White with her black cloak. I can see him hobbling over… “Sofia, Sofia sign my photo!” lol… 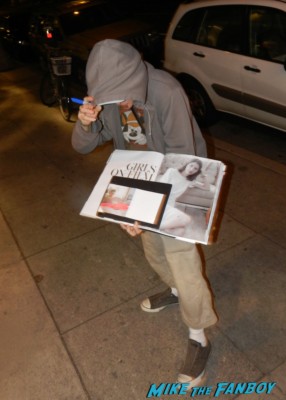 We’re probably laughing about it too much but honestly, I think it’s pretty damn funny. Oh autograph humor…

Suddenly we hear clapping and I’m going to assume the q and a is over. The car pulls up towards the door and we gather on the right side. A few seconds late the door opens and out comes Sofia. 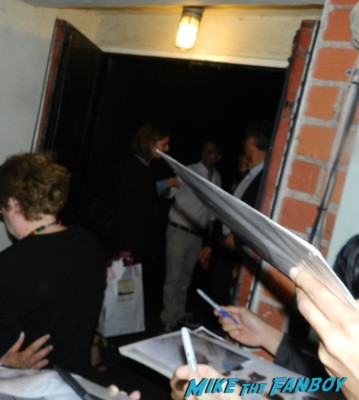 She is very cordial and starts signing away. Scotty gets his items done and then I get my Lost In Translation picture disc signed. Sofia was like, “I’ve never seen that.” I told her it was for the soundtrack and then I got my Bling Ring mini poster out. 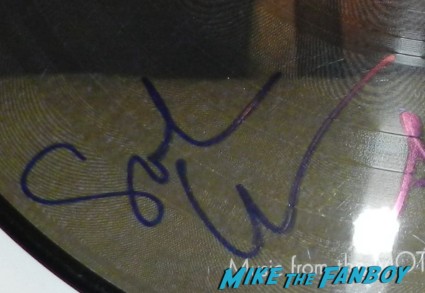 She signed that one for me as well… 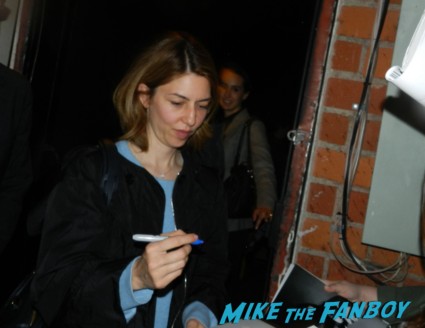 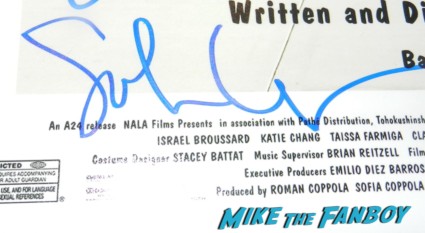 honestly, she really tried to give everyone their quick moment which I appreciated.

Then a guy in the back said, “Can you sign my poster” and she agreed before heading into her car. 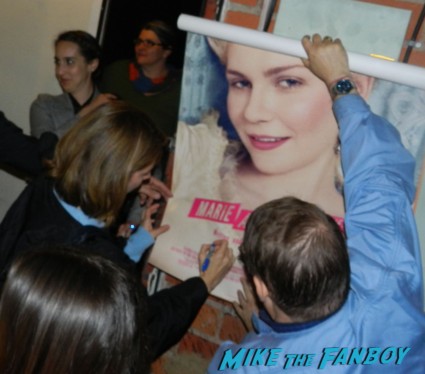 Jack got Sofia to sign a DVD cover inside and then I think another one outside as well.

She was so kind and so rare to see out and about! I’m very stoked! 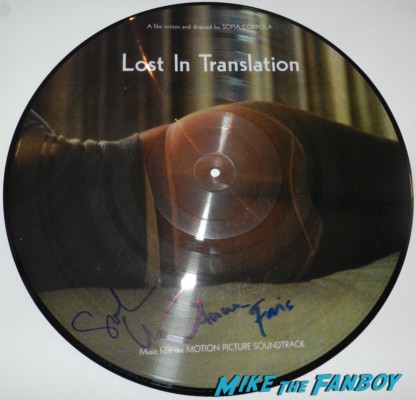 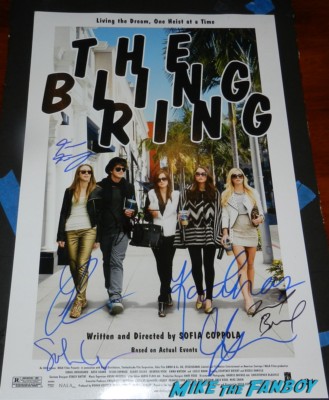