Can I tell you… I love this article.

And I have to tell you, it’s so true. Everyone has their favorites. I love Grease 2, a lot of people look at me like I’m nuts. I still get teased that I had Michelle Pfeiffer sign that for me at the Dark Shadows premiere.

Now, when I think of Teri Garr, I think of a little movie called Waiting for the Light and a TV series called Good Vs. Evil she did. Most people think of Young Frankenstein, Mr. Mom, etc…

Pinky has a similar thing, what does she love Teri Garr from? Mom and Dad Save the World with Jeffrey Jones and Jon Lovitz!

LOL… I thought I was the only person who knew that movie existed!

Hello, my lovelies. Pinky Lovejoy-Coogan here thinking about how fun it is that everyone has such varied tastes in music, performers, films, etc. Even in a group of fangirls/boys, not everyone is going to try for the same person and even if they do, they’re going to like them for their own personal reasons. Just because I watched Grease approximately 482 times growing up, doesn’t mean the person next to me on the street has even seen it once.

Likewise, perhaps someone else has seen the Police Academy movie 59 times while I’ve seen it zero. When it comes to fandom, there aren’t any right or wrong answers. We love what – and who – we love for our own reasons.

Why am I waxing philosophical about the fandom experience, you ask? Because I’m about to tell you about meeting a Hollywood icon, but the film of hers I love isn’t your typical movie. It’s a ridiculous movie. But, it was a lot of fun and I remember really enjoying it in my youth.

Yes, I know when you think of Teri Garr, you might think about Young Frankenstein, Mr. Mom, or even Tootsie. 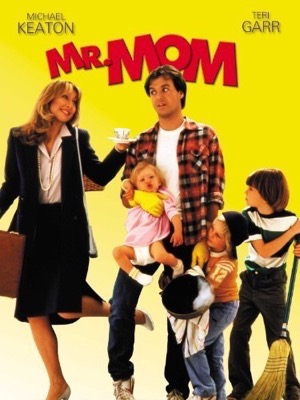 And those are all great films. But the movie I loved Teri Garr from was Mom and Dad Save the World (don’t judge me). 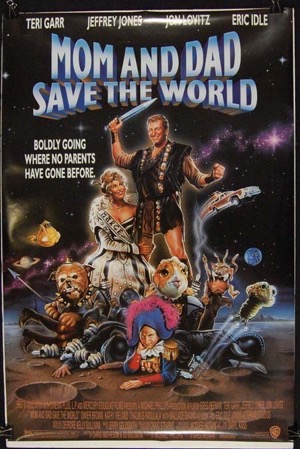 But regardless of what film I loved, most of all I just love Teri. She is such an example of strength and determination. I applaud her ability to still go out and meet fans after suffering a near-fatal brain aneurysm in 2006 and living with multiple sclerosis. That takes a great deal of will and determination and she does so with a smile on her face. There are plenty of perfectly healthy celebs out there who could learn a thing or two from Teri’s example. 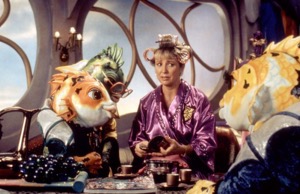 Late last year, I was thrilled to see Teri’s name added to the Hollywood Show. I was so looking forward to meeting her. Unfortunately, she had to cancel at the last minute, only to be added to the most recent show. As the day of the show arrived, we weren’t sure if she’d make it again, so we were cautiously optimistic. My girl Liz went early and said Teri’s table was all set-up, but she hadn’t arrived yet.

Not long thereafter, I received another text letting me know Teri was there. Hooray! I was so excited. When we arrived to the show, there were really long lines everywhere, especially at Teri’s table. Still, we should have gotten in her line then and not procrastinated. Before we knew it, Teri was gone for lunch and all we could do was wait. And wait. And wait. Around two, they came and said she should be back around 2:30, so we continued to wait in her line. Around 2:35, they came and said she wasn’t feeling well and had to go. Drat!

I was kicking myself for not going immediately to her line earlier in the day. As we heard she was leaving, my friend decided to go out to the valet area. Initially, I didn’t want to bother her, so I hung back inside. Finally, curiosity got the best of me and I headed outside to see what was going on (if anything). I got there just in time – Teri was posing for pictures with fans from her car and was about to leave. I was lucky to be the last one to get a picture with her and then she left. I was so excited! I told her how amazing I thought she was and thanked her for being so sweet. It was such a brief encounter, but I was thrilled to get a chance to meet her. Oh, and in case you’re wondering, I resisted telling her how much I enjoyed Mom and Dad Save the World. She probably wouldn’t have believed me anyway. 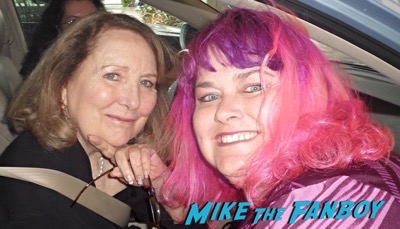