When it comes to Throwback Thurs I never know what to do. However, today I was like… Liam Neeson!

It was a really fun day and even though I pretty much hate my photo, it’s still a photo with Liam Neeson right?

About a week ago, I received a call, more like a plea, an impassioned plea… It went something like this, “MikeLiamNeesonisdoingaqandaandonlyyourcangetincanyoutakemepleasepleaseiwoulddie!” After translating what was going on, I surmised that Liam Neeson was doing a super rare Q and A for his film The Grey which came out, I believe, earlier this year.

Liz is a huge fan of Liam Neeson and really wanted a photo with him, so I said sure, I’ll try and RSVP and take her. Then I realized… Wait… I have to sit through The Grey again….

I have to admit and I don’t want Joe Carnahan to try and kick my ass for this but I didn’t love The Grey. In fact, I rented it hoping to really like it and I just… to put it mildly… Didn’t like it at all.

But for Liz, I said, I’ll give this another shot. I mean, sometimes you watch a film for a second time and go… “That was better than I thought.”

Sadly, not so much for the Grey. It’s odd because I love Liam Neeson, I like Frank Grillo, I even like Joe Carnahan’s work in Narc, The A-Team and Smokin’ Aces to some extent, but I just could not get into The Grey. Perhaps it was the lack of hope. I mean every “monster” movie has hope. You hope that Roy Scheider kills the shark in Jaws and you think he can do it… That just wasn’t the case with the wolves in The Grey. It was like, “You’re going to die, just in what order and when.”

I can go on and on, but honestly the reason we went was for the Q and A. Liz was tripping… and by tripping she was “Mike meeting Elizabeth Perkins” tripping. Oh yeah…

The Q and A was with Liam Neeson, Frank Grillo, Joe Carnahan, and Dermot Mulroney showed up last minute! Of course I didn’t bring my Family Stone mini poster! Dammit! Ah well…

So, after the movie the moderator came on stage and said they were delayed because Liam Neeson was wandering around. He made some mention of them all drinking so I was like, this is going to be an interesting panel.

A few minutes later all the guys came on stage. 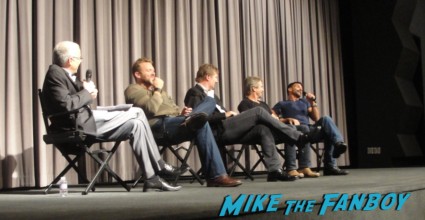 First off, I don’t think I have even heard fuck used so many times during a Q and A. Literally, it must have been 30-40 F-Bombs. 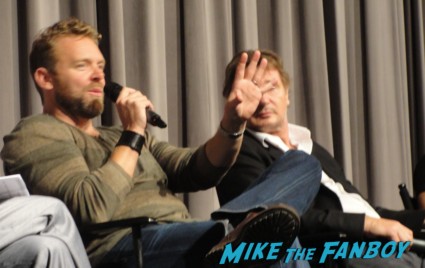 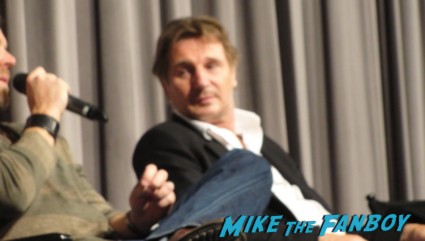 Liam Neeson was clearly drunk, at one point he talked about his wife who is deceased and I really thought he was going to break down. I was like, “Oh… He is so sweet!” 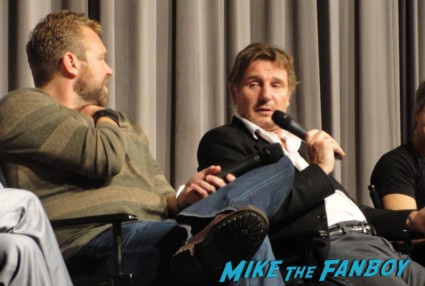 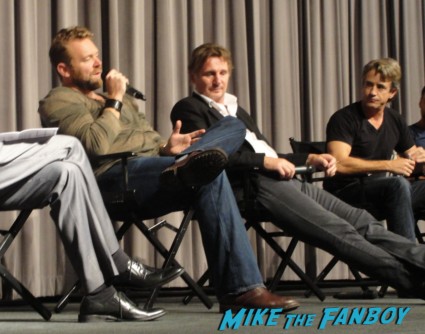 The cast discussed the film, Liam even said, this is the first time he has ever done something like this! 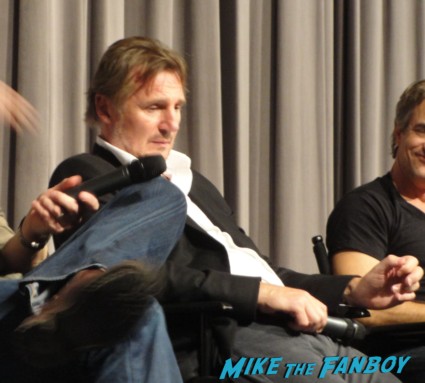 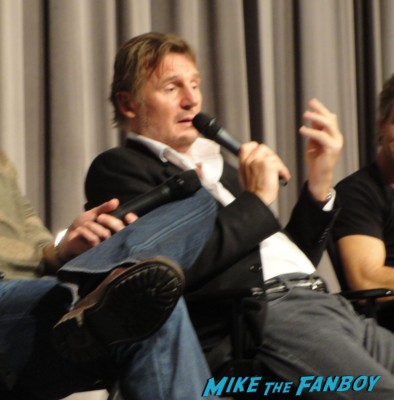 They also talked about the conditions of making the film, how the cast bonded in the harsh conditions, and how Bradley Cooper was originally supposed to be the lead in the movie. 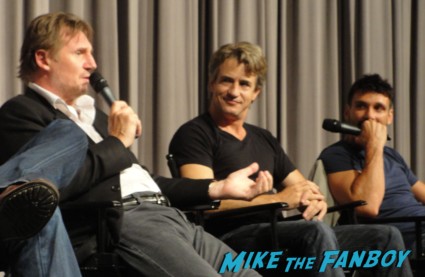 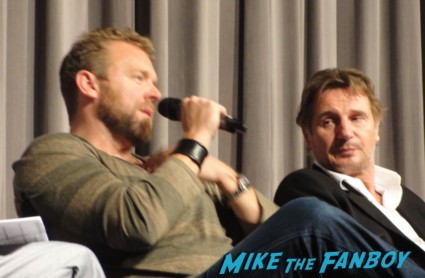 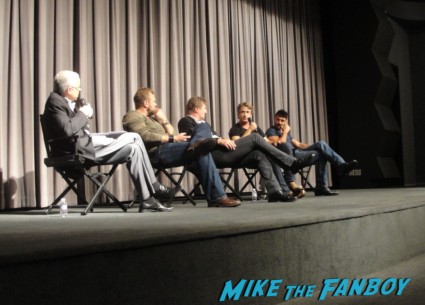 I have to tell you, the Q and A was awesome! It made me like the movie a lot more but not enough to see it again. LOL… 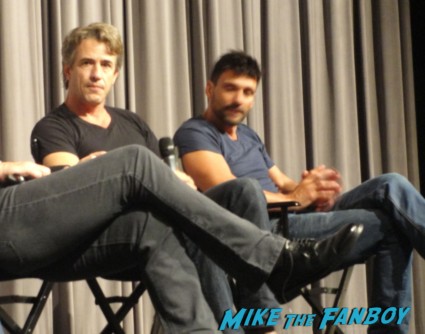 When they opened up the Q and A to questions… Well… This is where the crazy started. A woman in a yellow dress asked Liam Neeson “If he was in Fast Times At Ridgemont High.” His response was priceless… “I was not in… Fast Times… At… Rigemot High.” Picture him saying that. Then the woman said, “I’m an actress but I’m also a substitute teacher and my kids wanted to know if you were going to do more comedy Liam?” His response? “What? Based on The Grey!” LOL…

Frank Grillo was laughing so hard he put his had into his lap. LOL…

After the Q and A, it was Liz’s moment. I told her “You have to be aggressive!” Sure enough, Liz headed right to the stage, and it looked like Liam was going to leave right away, then Liz asked (a few times) if she could get a photo. Liam said, “I’ll be right back and winked at her.”

Liam left the stage for a bit and I had to try and calm Liz down by petting her. LOL… I kept saying, are you okay? Are you okay? Liz was like, Yes… YES! YES!!!!!

LOL… She was adorable! Then Liam Neeson returned. He brought his own Sharpie to sign autographs for people. I thought that was so cool! He brought a sharpie out with him!

Liz asked again about the photo and Liam said, “Sure… Sure…” He got down and Liz got a beautiful photo with him. I’m a tad jealous. 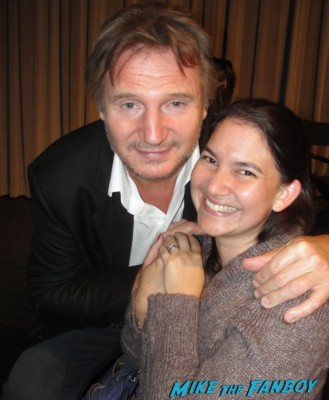 Then I looked around there must have been 40 people waiting. He took another photo and then I got a photo with him as well… Even though it’s a crappy photo. 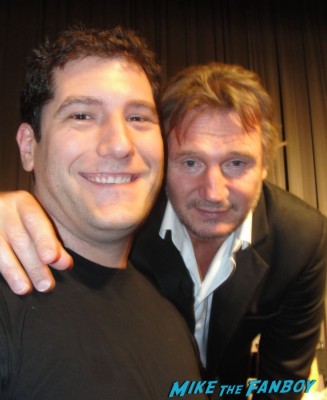 Still a crappy photo with Liam Neeson is still a photo with Liam Neeson! People really did start to swarm, I worked my way over and wanted to get my Love Actually uk quad mini poster signed. Liam Neeson signed a Star Wars DVD for one guy (yes, you read that right) and then saw my Love Actually mini poster. He said, “Love Actually!?” I said, I really love this movie. It makes me so happy every time I see it. And Liam gave me the nicest signature ever. He even did a fun squiggle underneath. Plus, he signed it perfectly right next to his name. 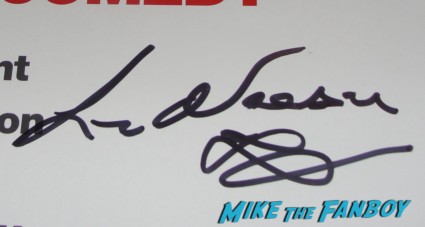 It was a pretty epic night, but more than anything, I was really happy that Liz was able to get her photo finally with Liam Neeson and that it turned out so well for her! 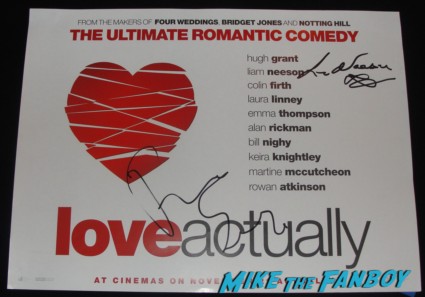