Yep, the saga of Sydney Bristow, one of my favorite shows of all time and its also one of the reasons the Erica and I were able to become friends so fast… In line for signings at SDCC no less. One of the first things we talked about was our mutual love of Alias, how much we hated
Melissa George and loving Lena Olin.

Erica has worked and worked on her Alias cast piece for a long time, and has done an awesome recap of her cast piece!

Strap yourself in as I recount the tale of how I finally finished a cast piece for one of my favorite shows, Alias! If you haven’t seen the show, clear off time to binge watch the first two seasons since it’s really, really hard to stop. Seriously. They all seamlessly blend into one huge action story so don’t say you weren’t warned… 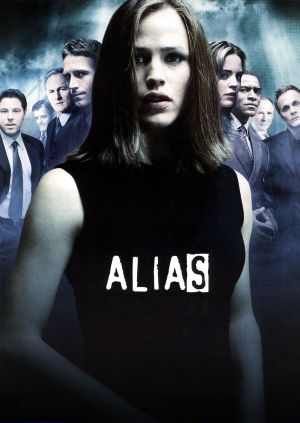 My story begins 10 years ago, when Comic Con was a very different place. It was a mythical place where you could walk up to the door and buy tickets. A person could just walk into Ballroom 20 to grab a seat (there was no Hall H) and Inkworks was making trading cards and hosting signings for the shows they worked on, including Alias.

Determined to get into the Alias signing that year, my sister and I ran to the Inkworks booth first thing in the morning and grabbed one of the coveted Alias signing tickets. Yeah! We got in line at the appointed time and I started my Alias cast piece – a DVD insert since Inkworks provided full-sized posters (which I’m allergic to) or their trading cards. 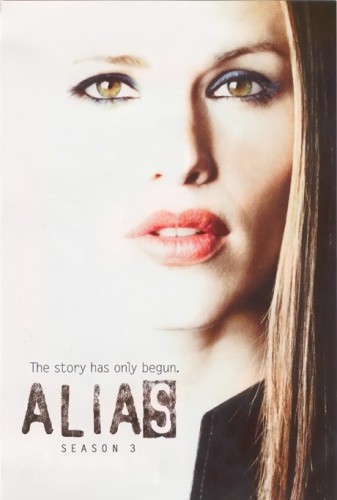 At the signing, we had the ever-friendly JJ Abrams, Greg Grunberg (Eric Weiss) and Ron Rifkin (Arvin Sloane). JJ Abrams is and was one of the friendlies guys… 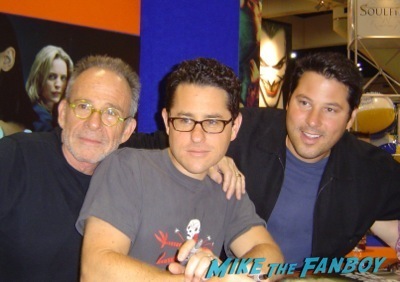 I asked JJ to sign my insert and he replied “well, I actually am Sydney Bristow” and how much he loves that image. I also asked JJ to sign a promo trading card for some new show that’s about to debut -– Lost! He’s surprised to see the card and takes a moment to look at the image before signing it. 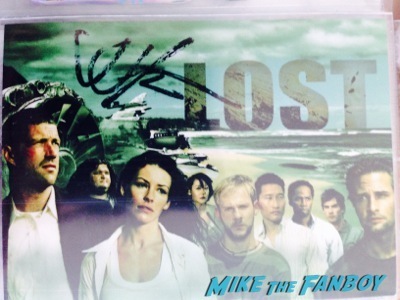 Greg looks on, fascinated, and calls out “hey those are out already?” He grabs the card from JJ to examine and it, and before I can say anything, Greg flips the card over and signs the back and says “Shh! Don’t tell anyone! Shhh!” Uh huh. Just like that, I know he dies in the pilot! 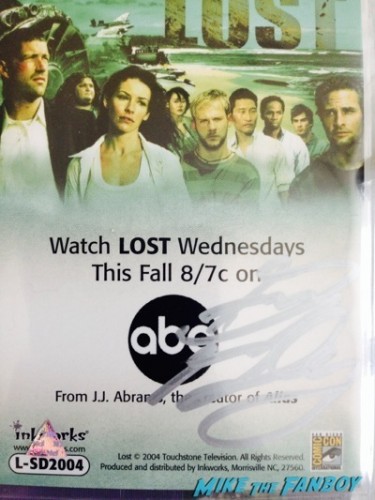 Ron Rifkin is next and I remembered how great he was in the stellar Broadway production of Cabaret a few years before. Ron was a great part of the Broadway community and participated in some of the fund raisers including a show where he danced with a guy in a bear suit. I don’t know why he was dancing with a guy a bear suit (it was pretty surreal), but I mention to Ron “I have a video of you dancing with a bear.” Yeah, that got his attention. I explain it’s from the Gypsy of the Year competition and then he laughs and grabs JJ’s attention and points at me to say proudly “she has video of me dancing with a bear!” JJ just looked bewildered at that and Ron laughed. 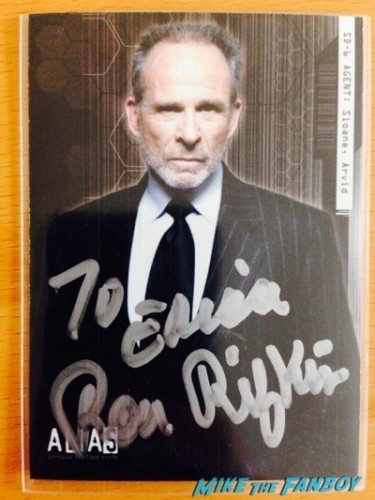 Yeah, a strange moment, but I got my Alias started!

Two years later, Bradley Cooper (Will Tippen) did a play on Broadway called Three Days of Rain with Julia Roberts and Paul Rudd. The crowds after the show were stupidly large for Julia Roberts (people nearly got their toes run over by Julia’s car), but very docile after she left. This was well before Bradley Cooper was Bradley Cooper so this was the calmest and easiest crowd I’ve ever seen around Bradley. Quiet, but friendly, he signed for everyone so I got Bradley Cooper to sign my insert. Yeah! 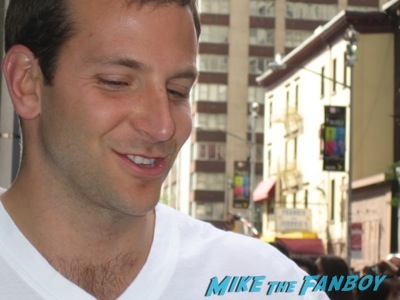 But I was still missing Jennifer Garner! Luckily, Jennifer was going to star in Cyrano on Broadway so I booked my trip, packed my insert, arrived in NY just as the Broadway strike of 2007 started. Yep. That wily Sydney escaped my clutches this time! Sadness! 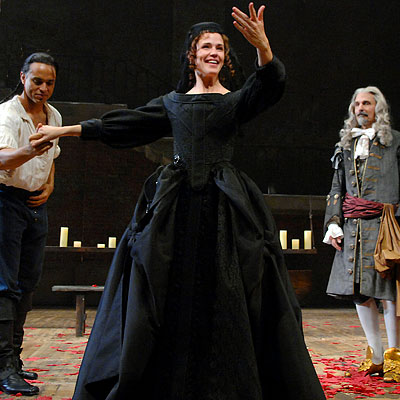 Fast forward two years (did I mention it’s taken a while for this piece?) and I met Victor Garber (Jack Bristow) in NY. Victor can be a bit temperamental sometimes – but he does have his nice days like when we got him to pose for a picture with the family mascot, Mookie the walrus (long story). Today he was nice again and I finally get a Bristow on my insert! 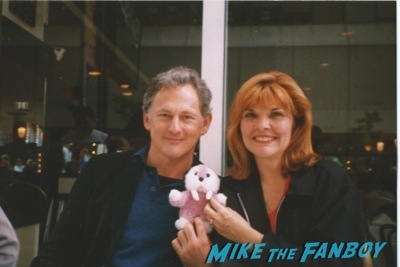 Another year goes by and then Mike and I go to a screening for the TV show, Hawthrone which has a reception afterwards with Jada Pinkett Smith and Michael Vartan (Michael Vaughn)! Ah!!! Most of the folks were there for the very friendly Jada, but we made a beeline for Michael who kindly signed our stuff before he headed out early. Whew! 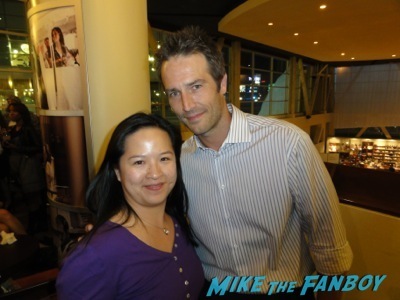 A few more years go by and I truck my insert back to LA a few times since Jennifer is supposed to be doing some promotions, but I never see her. Mike’s able to get David Anders (Julian Sark) and Merrin Dungey (Francie) on my insert (yeah!), but I still need Jennifer! 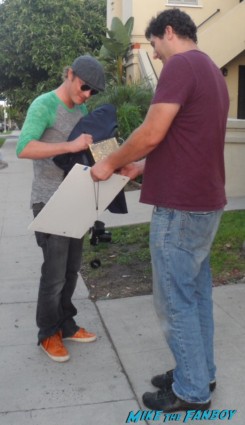 Last year, Jennifer was out and about a bit since her husband was hitting the awards circuit for Argo. So my insert once again made the trip to LA. And this time, I finally get to see Jennifer in the flesh! And there she went! She motored down the carpet without a glance at anyone! Doh! Foiled again!

But this year, she’s nominated for a couple of SAG awards so I bring out my insert yet again and it makes the trip to LA. During the SAG arrivals, we finally spot her towards the end of the red carpet. She looks like she’s going to pass us by (ah!!!), but the publicist points to me and Scotty as we have our Dallas Buyers Club posters out and she brings Jennifer over! Ah!!!!! 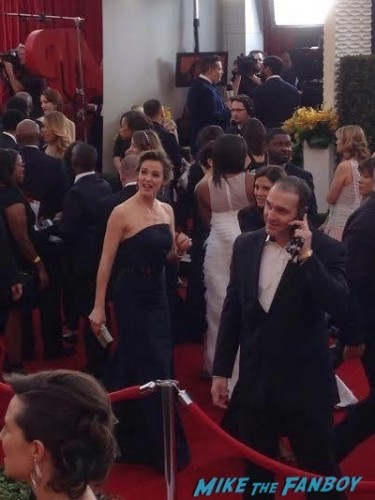 I scramble like crazy to find my tiny DVD insert and have to figure out how to get it to her since we’re so high up. Jennifer is looking gorgeous (like the 10 years and 3 kids haven’t happened) and signs my Dallas Buyers Club poster. While she’s signing another poster, I place the Alias insert down on my board and ask “Jennifer, would you mind signing the Alias?” She turns to look and her eyes bug out and she says “How have I NOT signed this before?” since it’s so covered. She finds an open spot and squeezes in her signature before she heads out to the red carpet and the photographers. Whew! 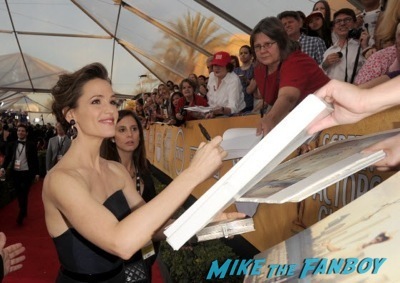 OK, I would LOVE to get Lena Olin (Irina) or maybe Kevin Weisman (Marshall) or Carl Lumbly (Dixon) on this cast piece, but I’m happy with who I have and I’m running out of room so I will call it done.

And there you have it! 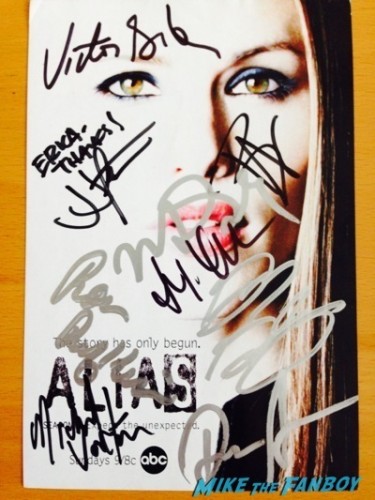