Honestly, who isn’t a fan of The Walking Dead? The cast is great, the show is great, I’ve never known such a bleak series to capture the zeitgeist of the nation… But… It’s happening! With the return of The Walking Dead February 9th, Erica wanted to do a recap of her “bad” luck meeting them.

It’s strange but she’s just always missed them through no fault of the cast. It’s just one of those things. However, when she was in New York her luck changed!

Check out her Full recap below!

As nice as The Walking Dead cast is, I just have bad luck with them! Sniff! No, I don’t think it’s on purpose, but I just don’t have good luck with them! I went to Paleyfest and even though there were 11 cast and crew members, I managed 1 signature from one person. Yep, that’s my luck with them!

Case in point: I was with Big Apple Elisa in NY. We were waiting for some folks at an event when Elisa got an updated guest list and found out that Danai Guerra was in attendance! Elisa has a stack of “just in case” posters with her and asks if she should pull out her Walking Dead poster. I reply: “Since I didn’t bring my poster, you probably should since, with my luck, she’s going to walk out, come straight towards us and ask if we want an autograph.” Elisa laughs and pulls out her poster.

Not 5 minutes later, we see Danai leave the event early, contemplate the 3 different exits, choose our exit point and walk right to us. (I kid you not!) I need Danai on my Walking Dead poster and, of course, I don’t have it with me. At Paleyfest, she took my poster and was about to sign it when another pro shoved my poster down and got his photo signed instead. Yep. Just my luck with this cast!

So Elisa gets her poster signed and I manage to get a nice photo. I’m happy to get the photo, but kicking myself for not bringing my poster! 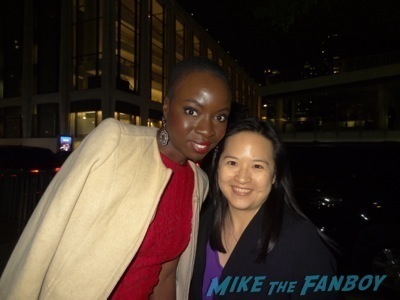 The next morning, Elisa and I are walking around NY when we see a crowd of autograph pros outside a building. We head over and see that they are all clutching Walking Dead photos – yep, someone from the show is doing an interview! Elisa whips out her poster and I am still kicking myself for not having my poster. In a few minutes, a very amiable Andrew Lincoln comes out and signs for the mob. He is being really, really nice and signing for everyone. And me without my poster! Sigh! I do get a nice photo with him though!

The next day the cast and Benedict Cumberbatch are all taping a talk show! This time I am prepped with a new brand Walking Dead poster, my Sherlock poster and my Hobbit poster. I get there early and I swear that a truck dropped off a whole load of rabid Cumberbatch fans so we’re rather an unruly crowd. Oh there’s threat of rain – never a good sign!

We wait for a while and then The Walking Dead cast starts to arrive one by one – Andrew is first and he’s as amiable as he was the day before (and better dressed for TV!). This time I get him on my poster! 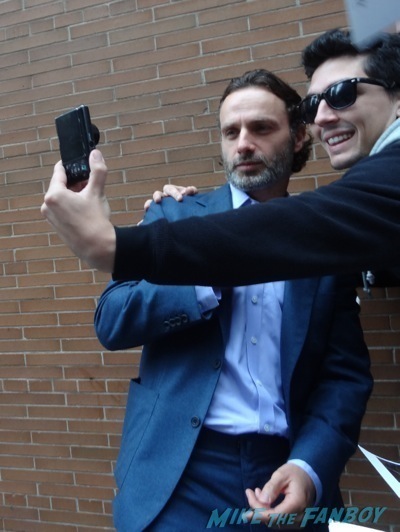 Danai is next and she stops and signs, but covers slightly fewer people. Since I’m up front, I get her on my poster, but her pen skips so it’s hard to recognize her signature. You’ll have to take my word for it that she signed it! 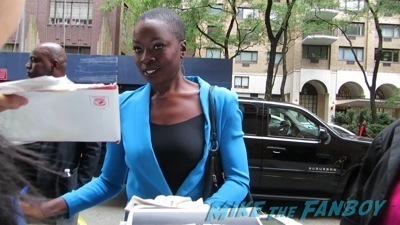 The next car drops off Norman Reedus and the crowd goes wild. He heads towards the end of the line and quickly makes his way forward. He’s covering everyone and says “Boom! Boom!” with each “N” that he signs. I think he and Andrew are the only ones that covered the entire group of fans. I get a quick picture where it looks like he’s sniffing my hair which makes for an interesting shot – so glad to get him without sunglasses! 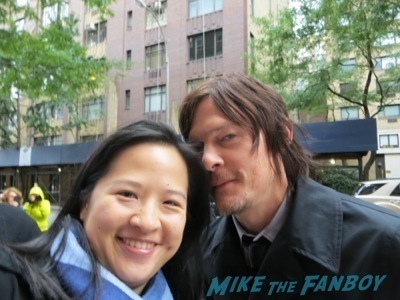 Lauren Cohen comes out next and she can only sign for a portion of the crowd since she’s wearing really killer stilettos and a good portion of the sidewalk is a grate. I manage to get her on my poster and also help out a few others. The guys were all hoping to get pictures with her, but can’t due to her shoes. 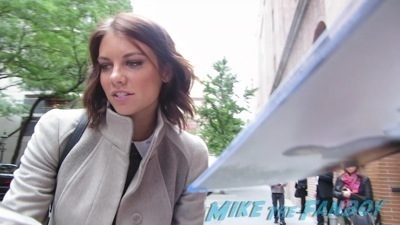 The last one to arrive is Steven Yuen, looking as adorable as ever. Since he’s running late, he signs less than the others, but I manage to grab a picture with him. 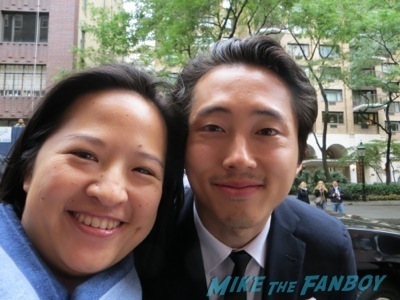 Yeah! So I managed to get the cast this time! It may be the messiest poster you’ve ever seen, but I did get them! 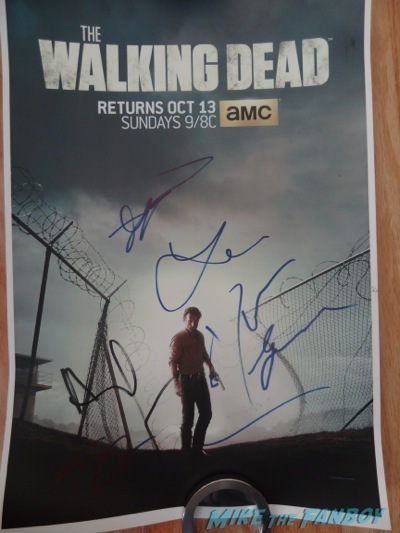 The Walking Dead resumes the second half of season four on February 9th.