There’s nothing like a good convention to catch up with your favorite celebrities… God bless it! The Lovely Erica was out and about at a little convention called… Comic Con… Maybe you’ve heard of it?

Anyway, she was able to pretty much meet the entire cast of Divergent! The new Veronica Roth film. I watched the trailer again today and it looks awesome!

With the recent clip just released and the news that Neil Burger won’t return to direct the sequel, I just realized that I never posted a re-cap of my Divergent adventures at Comic Con! 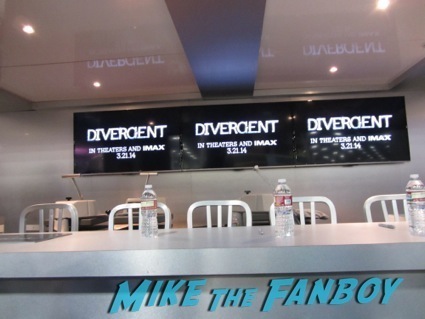 We had no indication of who was signing when at the booth, but soon we see the cast arrive. Zoe Kravitz (Christina), Christian Madsen (Al), Amy Newbold (Molly), Ben Lloyd-Hughes (Will), Harrison Ford and Miles
Teller (Peter) settle in. 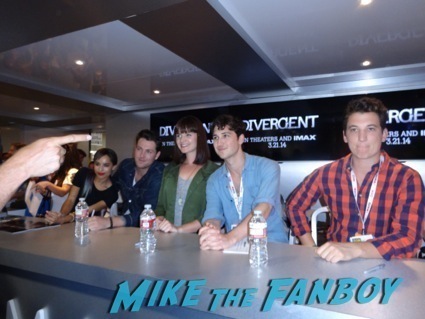 Ha! No Harrison is not at the signing, but Ben has kidnapped Harrison’s name card from the Ender’s Game panel. I don’t think Harrison Ford needs a name card anyway… 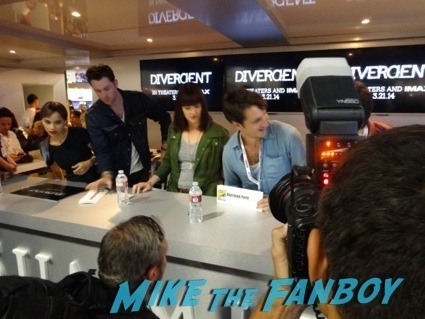 Fresh from the panel, the group smiles and gets down to business. We’re further back in line so it takes a while before we circle up close. When we’re close to the front, I see Ansel Elgort (Caleb) waiting in the wings! I call out his name and wave and he gamely waves back.

I mime that he should start signing and he nods and says he’s headed over. Sure enough, they are changing the guard and I can see Mekhi Pfiefer (Max), Maggie Q (Tori) and Ben Lamb (Edward) as well. Yeah! 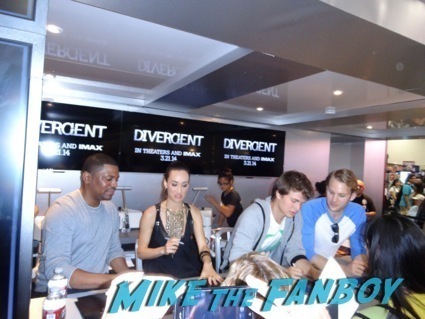 As I get up to line, I chat with them about filming in Chicago. I love the fact that the author, story and movie are all anchored in my hometown. Unlike some other movies that take place in Chicago (say, the Oscar best picture winner Chicago), they filmed all of Divergent in the city. 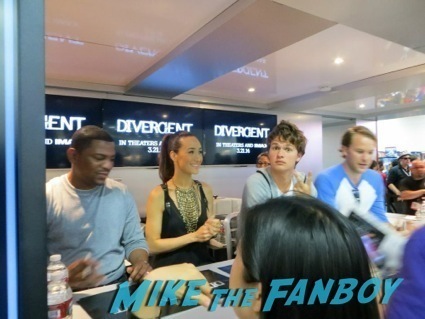 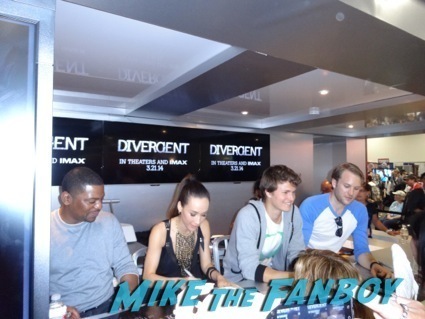 Mekhi is laid-back and Maggie is open and personable. Ansel is hilarious while Ben is rather quiet, but amiable. It’s a fun moment to talk to the cast who are excited since it just wrapped last week.

Afterwards, I hear about a Summit party they are attending that night and happen to grab some signatures of the other cast and crew before and after. Before the party begins, I run into Veronica Roth who said it was “absolutely amazing” to see her book come to life since she was on set nearly every day.

I also run into Neil Burger who is actually quite easy to talk to and a bit exhausted given his work schedule. He stops and asks which cast signing I got into and chats about Chicago. (I love that it’s an automatic conversation starter with this movie!)

Dashing by quickly, I also grab Theo James and Shailene Woodley in quick succession! Theo is kind and check out the hat he’s wearing! 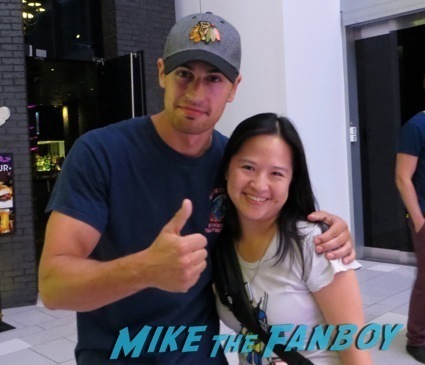 Shailene’s people are sprinting her off so she can get ready for the party, but she does a quick signature and picture. Notice the Shaka hand gesture in the picture – probably something she picked up while filming The Descendants in Hawaii. 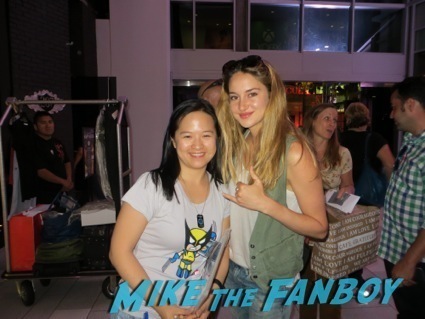 We also see Christian Madsen and Ben Lloyd-Hughes who also kindly stop to sign my poster. I see Ansel pass by and he’s wearing his new purchase from the Comic Con exhibit floor (hint: He’s Batman) – I love it when the cast/crew of shows enjoy the full con experience!

Once the carpet begins, we’re squeezed into the corner, but have just enough room to grab Zoe Kravitz who stops and seems pleased with my X-Men First Class poster. She gets a warm welcome from Ansel – so cute to see how friendly they are! 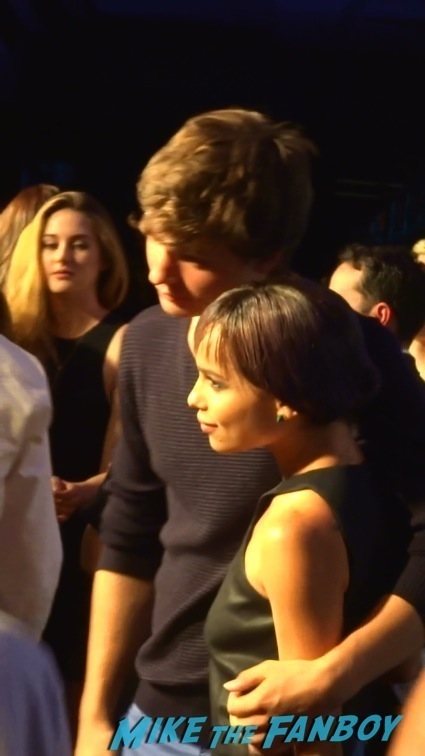 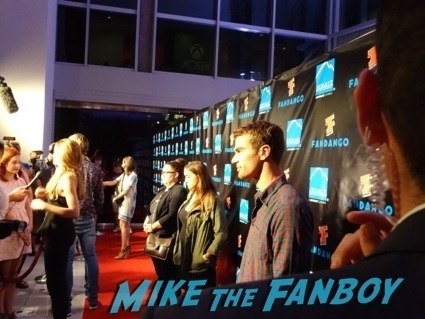 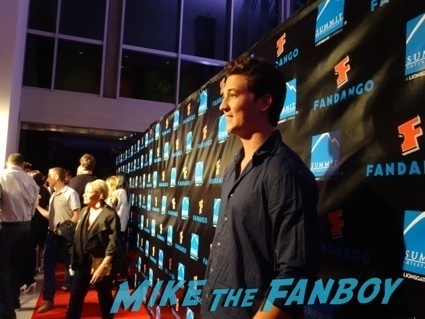 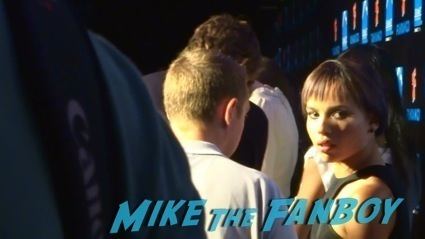 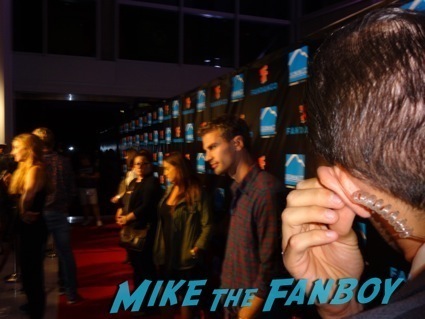 Amy Newbold and Miles Teller head quickly to the carpet, so we miss out on them, but do see Miles dance for the press a few times. Let’s hear it for the boy!

After the party breaks up, we run into Miles who stops and signs. Yeah! So basically I now have the full cast except for Amy! (Ironic since she’s the one Chicagoan.)

So overall the cast was really friendly and so excited to see the film which comes out March 21st. 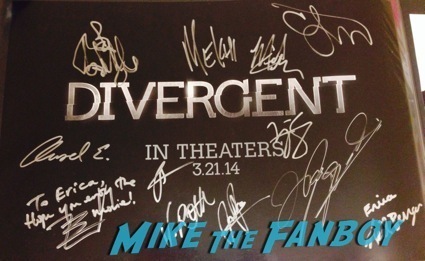