Oh my Gosh! This is such an amazing recap! MTF Reader KC was out and about and had an awesome random encounter! KC went out to meet Mike and Molly star Billy Gardell and ended up running into not only the Impractical Jokers but also Swingers star Vince Vaughn!

I have to tell you, I really like Vince Vaughn, Dodgeball is one of my favorite films, and yes, I may own a promo Dodgeball I’ve been trying to get signed. lol.

I’m really excited for KC and he better not be a stranger! This is an awesome recap!

So, Thursday was one of those days that makes you shake your head… In other words, I never saw what happened coming.

It started out normal. As planned, my wife and I embarked upon a trip to Nashville for a comedy show with Mike And Molly’s Billy Gardell as the headliner. We have watched the show every week for a long while and it is one of our favorites.

After being in contact with Billy’s manager, I realized it was going to be very doable to get him at the venue. So, I packed a couple items and a few Sharpies and off we went. Along the way, I picked up a free magazine that had an ad telling of all the acts that were coming to town for this week’s Comedy Festival.

The show was great. Billy’s a pro on the stage.

Afterwards, we exited and noted he wasn’t doing a meet-and-greet, but the stage door was one way in and one way out. The security guy was cool as we’d talked earlier in the day.

Thus, we camped out and waited for him.

Five minutes in, we got the first surprise of the evening. The Tenderloins – better known as TruTV’s Impractical Jokers – strolled through unannounced. My wife and I got a dual photo op with them, but unfortunately, it didn’t save to her camera’s memory card. :dislike:

Not wanting this to happen again, I went to the car to get my work camera (Nikon D90). A few minutes later, Billy Gardell exits the club. He stands on the sidewalk smoking and when the moment is right, we approach him. He signs my items, her items and takes a photo with the both of us with no problem. 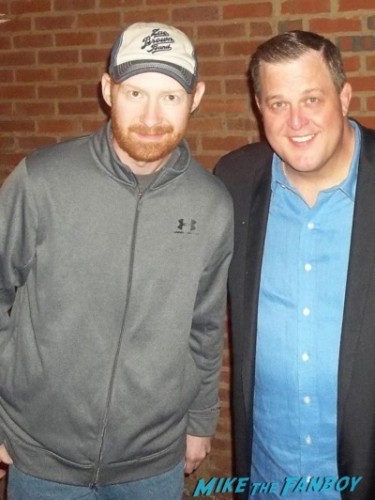 Yeah, Billy’s got a hit TV show, but this guy is grounded. He took his time with each of us and really seems to just be a regular guy that has an extraordinary gig and is thankful for those that support him. I love it when the people I support on TV and in movies turn out to be as appreciative of us as we are of them.

In the meantime, I spot Roy Wood Jr. from Sullivan and Son on TBS. The Sullivan and Son cast played the show after Gardell on this particular evening. I had one of Wood Jr.’s CD inserts, so I asked him to sign it. He seemed surprised to be recognized and for someone to have his debut CD. He signed it and personalized it to me.

So, pretty happy with my evening, I turned the magazine back to the page with the ad for the Comedy Festival and decided to wait it out and try to get the Impractical Jokers to sign it when they exited. Note: We were supposed to depart town at 8:30 and get home at around 11 p.m. for an early evening…

Then, it happened.. A black SUV pulled up. I glance to my right and my wife tells me my mouth literally dropped in shock and surprise.

Vince Vaughn. VINCE Freaking Vaughn exited the vehicle and strolled towards the curb. One hound, who obviously had chased him from the venue in town where he had just hosted a gig, asks for a photo and Vaughn obliged.

I was on Vaughn’s other side with that magazine (it was Vaughn’s Wild West Comedy Tour after all that was taking over town). I ask for an autograph and he obliges… Again. 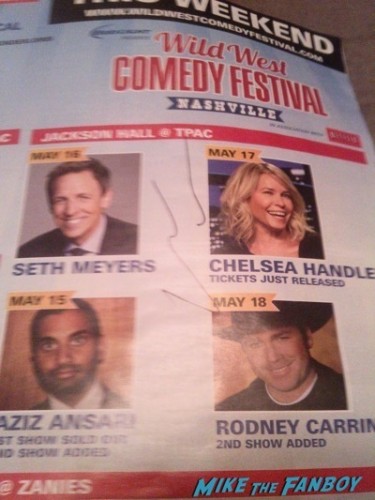 After this, I make the decision. I’m going for the other part of the dual with double V. I’m going to attempt the photo op with what I’ve heard to be an elusive creature.

Finally, the show lets out. I inch in and spot Vaughn in the balcony holding court with the Impractical Jokers. I opt not to approach, but four or five others that noticed him didn’t. They were told to get away by club security. I returned to my perch outside and waited for my chance.

In the meantime, The Impractical Jokers came back out as a unit. I ask for another photo op and explain the other didn’t save and ended up who knows where. They take a new picture with me. :yes: So, now I’ve got at least a consolation prize if Vaughn gives me the dreaded “No” that I’ve heard him to be famous for. I opted not for an autograph from them because the logistics would not have worked out for me. There were four of them in a pack. If I’d stopped one, the other three would’ve gotten away. I take the group photo op over the autos this time around. 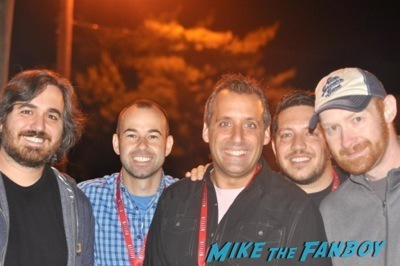 Five minutes later and at around midnight CST, a club worker is coming out and as the door opens, I see Wes Mantooth himself. He comes out the door. I say hello and he responds with a “Hey, how ya doing?” or something of that effect. I ask him for a photo. He walks the other way. It’s obvious that he is looking for his car. I feel my chance slipping away. Knowing where his vehicle is, I tell him “Mr. Vaughn, you car is right there” and I point him to the opposite direction from where he was going in the dark Nashville night. I again ask for a photo. He looks at me, says “OK, buddy, let’s do this.” My wife is staged and ready, blocking his path and with the camera turned on us. She clicks my camera. Ah, the taste of sweet unexpected success that I didn’t know was possible just five hours earlier… Happy dance. 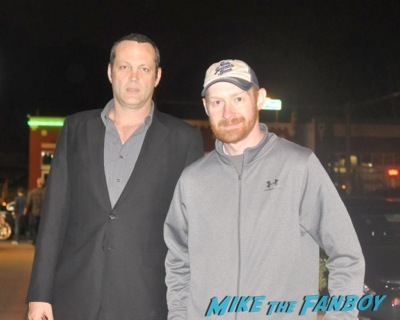 After I thanked him, he took two about 10 steps and some others that had been in their cars approach him. They get nothing. He climbs into his the SUV alongside Sullivan and Son star Steve Byrne and they ride off into the night.

All and all, the most unexpected, yet exciting meet evening I’ve ever had. I thought I was going to just get to meet one of my favorite actors. Who knew I’d get to knock all of these guys.

I’m a huge fan of Billy Gardell. I watch Impractical Jokers every week and I can quote my share of Vince Vaughn movies. I’d venture to say he’s in my top 5 of actors. To score both the auto and photo op from him just capped an incredible evening. 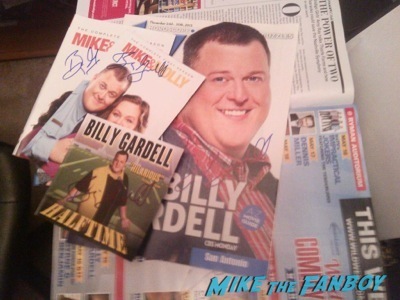