There are days when a fail turns into a success. Pinky was able to meet none other than Swingers star Vince Vaughn! The star isn’t usually the most fan friendly, but who can resist Pinky right?

After getting a fail earlier in the day, Vince did a screening later on that night and that’s where Pinky was able to meet him.

Hello, my lovelies. Pinky Lovejoy –Coogan here still really excited about my recent encounter with one of my favorite comedy giants, Vince Vaughn. 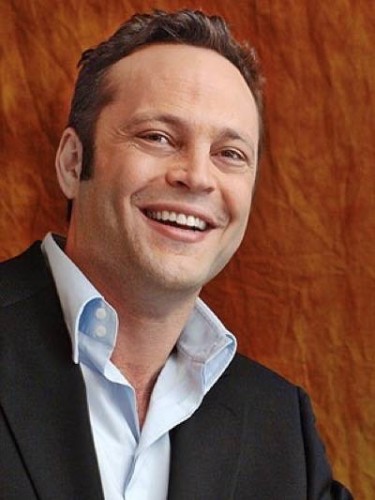 I’ve been a fan of his work forever, but had no idea he was on a flurry of epic shows in the ‘80s and ‘90s – shows like China Beach, 21 Jump Street, and Doogie Howser M.D. I first recall seeing Vince when he was in Swingers with Jon Favreau – he was fast-talking, hilarious, and mesmerizing on-screen. 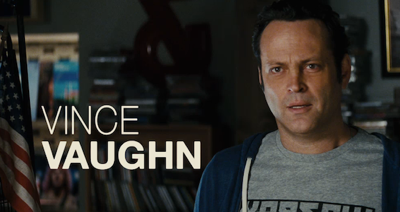 Throughout the years, I’ve loved watching him in such comedy classics as Old School, Wedding Crashers, and Dodgeball. He’s always so funny and there’s not much he can’t do. I’ve always wanted to meet him, but had always heard he wasn’t super fan friendly. Still, I’d never even seen him before in person, so when I heard he was going to be on a recent talk show, I couldn’t stay away. 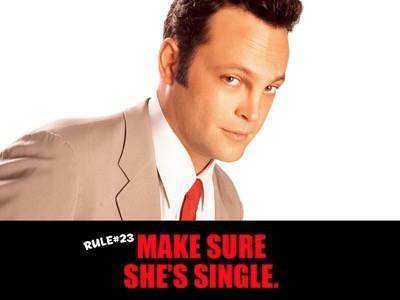 When I arrived to the show, I was surprised that there weren’t more people waiting. That’s when I heard the bad news: Vince signed and did some pics on the way into the show. Oh, no. Never a good sign. Typically guests will greet fans before or after but not usually both (unless they’re really awesome). Still, I held out hope. I’d made a big sign and was determined to at least see him. Mikey joined me a bit later and while neither of us held out much hope, we had to try. Now, the good part about hanging out with other collectors was that you hear things. And at some point we both heard that Vince was rumored to be doing a screening across the street later. Good to know.
Not long after, a car pulled up to the door and Vince got in. Despite our screaming and my sign, he did not come over. However, I made note of the fact that one collector was able to stand right next to the exit door/Vince’s car and Vince did take a picture with him. It was nice to see that if you’re right in front of him, he might do it (plus I’ve noticed multiple reports on this site lately with fan encounters, so maybe he was getting better). Mikey and I decided to try our luck across the street, but the venue had so many possible places to drop someone off it seemed impossible. We tried waiting at one place for a while, but then settled on the valet area once we noticed security was there waiting, too. What made me mad was that when the security guy saw us, he walked in and looked right at us (do we really look so threatening?) and then went back to his post. That seemed unnecessary to me. We weren’t hurting anyone; we were just two friends chatting. We decided to wait on a bench in between the valet and the elevator where they’d most likely take Vince up. While we couldn’t see the exact drop, we hoped to see them walk by. Sadly, Mikey decided not to stay and took off after a bit, so I was left sitting on the bench and playing Candy Crush. Suddenly, I saw the security guard, Vince, and a few others walk by quickly. The elevator was open and they walked right in before I could even stand up.

It all happened so fast that I didn’t even have a chance to call him. “Curses!” I thought to myself, “I didn’t even try!” I was about to give up and go home, but noticed the elevator hadn’t left. What did I have to lose? I went and pushed the button and the doors opened right up. When I went to get in, the security guard put up his hand like, “NO, you may not enter.” Ignoring him entirely, I held up my sign and called out Vince’s name. Now, Vince was standing in the back corner of the elevator and easily could have blown me off and said no, he was in a rush. But to my surprise and delight, Vince stepped off the elevator and came out to me. He thought I wanted an autograph and was all ready to sign my poster, but I told him I just wanted a picture. I made sure to congratulate him on receiving his star on the Hollywood Walk of Fame earlier that day and let him know how much I enjoyed his work. 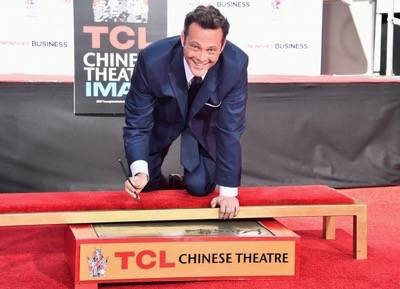 At least I think that’s what came out of my mouth (although, really, for all I know, I could have said, “Me like Vince. You take pic?”). Vince was amazing. Despite my camera taking forever, he held the elevator and took the picture, then thanked me, called me sweetie, and said to have a good night. I couldn’t believe it! I was on Cloud Nine! Bonus points to Vince for ignoring the security guy and doing it anyway, because he really didn’t have to. Hooray! Thanks, Vince! You made my night! 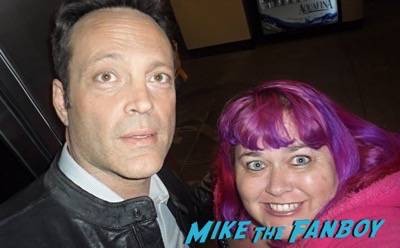