Oh my gosh, it’s friday and so much to post!
I’m loving it!

First off is Fanboy Fail Friday!

Now, there are times when you go out, knowing there’s a 20% chance someone will be nice and do. But if you don’t go, and they do it, you will kick yourself for months or years. Case in point Harrison Ford stopping his car last year. Who knew?

Scotty and I headed out for a double bill that included Joseph Gordon Levitt and Meryl Streep. I know… I know… Why do I torture myself?

I was like the second person on the scene and was joined by a couple other fans. I did run into MTF reader Jamie and we were able to chat for a bit which was nice! I love talking to people who read the site. 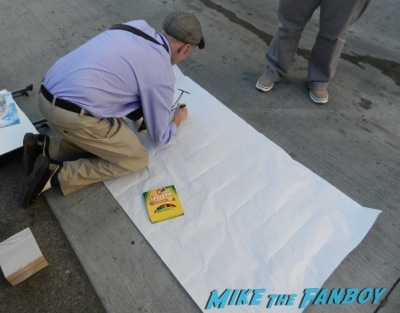 Now, this sign was taller than me. Seriously, it was over six feet four inches long. We had it on boards. 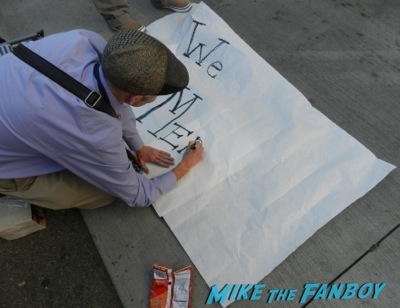 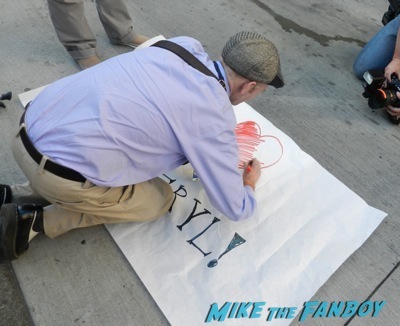 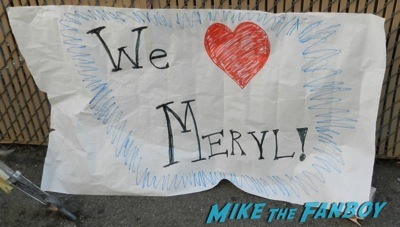 Joseph arrives and darts in without a wave or anything. Standard. 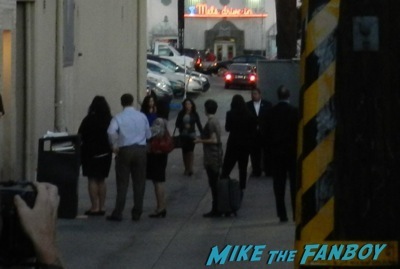 Now, it’s on for Meryl. There’s only six of us.

The door opens Meryl arrives. Scotty is louder than marines on shore leave drinking in a bar while watching football. No response.

Finally just as Meryl gets to the door, she looks over at us, sees the sign and gives a half wave and goes in.

Not the response we were hoping for. Dammit!

So we wait. We talk about the weather, current events, you know the usual. The darkness sets in and then as the end is in sight, security sets up a barricade in front of us and puts about 30 teenagers there. Uhhhhhh Wha?

We tell security they are wrong, the security is new, and we tell them what to do, finally they move every one, and then the put a barricade on the other side of the ally.

We move to the other side were it’s closer and lit up. There are only a few of us, maybe eight.

Meryl Streep is taking extra time inside because she’s shooting something extra and then… The car pulls up at the door, moving whichever way the crowd isn’t. Dammit. 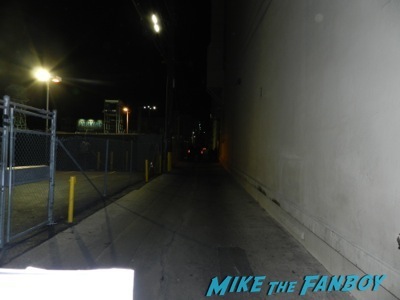 And then… Meryl exits, we yell and she ignores. Doh.

Not that I expected anything different, but it’s sure disappointing.