So lately I’m been obsessed with Back To The Future. I know Billy would say “lately?”

But with a lost Back to the Future poster lost in the midst of Minnesota right now, Michael J. Fox is on my mind. I’ve only met him very infrequently and it sucks because I’m a huge fan and have so much stuff for him!

Remember Poison Ivy with Nancy McKeon? I still quote it!

Check out my recap meeting Michael J. Fox below!

Today is a day I have been dreading for the simple fact that it would be very long, and there are going to be so many people waiting with me… ugh… The one and only Mr. Michael J. Fox is doing a rare appearance in Sunny Cali while promoting his book Always Looking Up.  I have wanted Mr. Fox for such a long time, and this might be one of the rare instances I might actually be able to get a signature!

1:00 p.m. – And here it is, the start of my odyssey… sigh… I have to say this is a day I have been dreading for weeks.  I first had to go to the Doctor’s and now I get to stand outside for eight hours.  Ugh…   I really wanted to be one of the first people here so I could secure my spot on the line which is why I got here so early.

1:20 p.m. – I brought my Family Ties DVD with me to get signed.  I already have the rest of the cast on it, so getting Michael will complete my set.  Sigh that would be so great.  I also brought a TV Guide that dates back to 2000 that my friend had kept for years.  I’m hoping to get that signed for her as well.

1:46 p.m. – There are about 11 people or so here now, it looks like a lot of others had the same idea.  I have heard that Michael really needs to concentrate now while signing so I felt it was imperative to get in the front of the barricade.  If I had a large poster maybe not so much but with a regular DVD cover and a small TV Guide I felt they might get lost in the shuffle.

2:02 p.m. – I am so glad that I bought a blackberry.  What would I do without brick breaker to pass the time?  God, I hope I get that TV Guide signed for my friend… sigh…

2:25 p.m. – I just realized that there was the Hollywood Collector’s show this weekend and a lot of people went.  They had a Back to the Future reunion of sorts there and a lot of people got their posters signed by the rest of the cast so they would probably try and finish them here.  Double groan…

3:18 p.m. – My mind is racing a bit.  It’s funny what kind of strange crap one thinks of when they are sitting in a random ally.  LOL… I just sat here and was wondering if the singer Duffy would make a really good second album or if she would be a one hit wonder.  With all the crap happening in the world, swine flu, the recession, etc… here I am pondering the fate of a pop singer.  I’m a freak.  What can I say?

3:58 p.m. – I feel like I should write something so I am… I really have nothing to say.  I have gone from pondering the fate of Duffy to a void of nothingness…

4:14 p.m. – I just decided to call Erica; I had to tell her about something random.  See, if Erica lived in LA then I wouldn’t have to call her with randomness or ponder the fate of Duffy, she would be here and I could… well I would probably discuss the fate of Duffy with her as she politely nodded waiting for the discussion to change into something else.  LOL….

4:56 p.m. – I just checked my email, and apparently KFC was giving out free chicken and I missed out… sigh… back to pondering the fate of Duffy.

5:32 p.m. – It’s a little strange that there isn’t a barricade up yet.  There are literally about 45-50 people here.  Everyone is starting to form their own barricade; well I might have started that effort a little, LOL.  It’s funny because everyone is lining up in an orderly fashion like there was an actual barricade in place.

5:49 p.m. – Now security is making us move again… damn it, they claim a car cannot get through.  Now, it’s a giant cluster of craziness… great…

6:04 p.m. – We all just realized that it is going to be a late taping tonight.  Great, how wonderful.  Usually people arrive earlier than this, so now even more people can arrive and join in our fun… Did you sense the sarcasm there?

6:22 p.m. – Oh finally, they are whipping out the barricade.  Now everyone is pushing and shoving to try and jockey for position.  I reached over and secured my place in the front, but it was a struggle let me tell you.  Sigh…

6:48 p.m. – There is some action going on now, it looks like some people are coming over to the gate.  There he is, everyone is getting ready with their posters and what not.  I’m really not confidant that he will come over to a crowd this size, but it is worth a shot.

6:50 p.m. – Holy crap, he is just walking right over!  When he gets to the crowd he says he will do the line (it might have been his publicist that said that, I don’t remember).  Damn it, he is starting on the opposite side!  Ugh… it always happens when they start at one end; by the time they get to the other end they want to quite early.  Sigh…

6:55 p.m. – It really is quite crazy.  It appears that Michael has to really pay attention to everything he is signing.  Some actors can sign really fast and do multiples but he has to really concentrate.  I saw him have to physically take items from people to sign so he can concentrate on them.  It’s good to see him out and about though and so willing to take the time out to sign for fans. 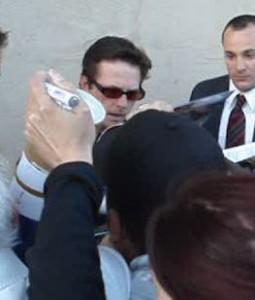 6:58 p.m. – Michael is making his way over to my side now; I have my friend’s TV Guide cover out to try and get him to sign it.  He keeps missing it.  I think the cover is so small he can’t really see it.  I decided to put the DVD cover out as well so I can get at least one thing signed. 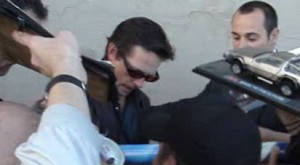 6:59 p.m. – Michael just grabbed my Family Ties DVD.  He physically took the DVD from me to sign it, which was really cool, because he specifically looked for his spot to sign it.  I still can’t get this damn TV Guide cover signed.  He keeps bypassing it, which really sucks because it’s for one of my best friend’s and I would really love to get it for her.  Sigh. 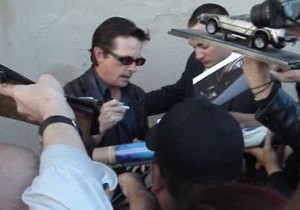 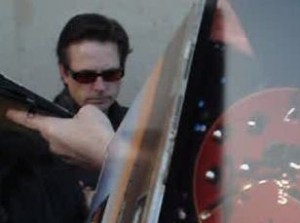 His publicist said that if he’s feeling up to it he will come back.  He signed so much; I just wish that I could have gotten this TV Guide signed.  I have to try and wait for my friend. It’s just too bad because I have to pee like a race horse and my ears are freezing off.  Sigh…

7:15 p.m. – It’s really bitterly cold now, the wind is just picking up and a lot of the professionals are around now, which makes the night ever harder to bear.  Sigh… double sigh…

7:33 p.m. – This is such a strange night, I will say.  There isn’t a second guest, and since I have one auto I feel happy, but frustrated for my friend.  Sigh… For no one else but her would I still be standing out in this cold for.

7:59 p.m. – A couple people from Dancing with the Stars just arrived.  I don’t know who they are because I never watch that show.

8:35 p.m. – Uh oh… the security guard is holding the door open which is never a good sign.

I feel so bummed for my friend, but I have to say I’m a little happy I got my DVD cover signed and completed.  I would say however I would have sacrificed my auto if I could have got hers signed for her.  Oh well, I really believe that there will be another opportunity and I can get her magazine signed.  I just believe it.  I have to say this was a really wonderful opportunity to meet a television and film legend.  He has been in such iconic films, this was a real treat.  Make sure and check out Michael J. Fox’s book Always Looking Up: The Adventures of an Incurable Optimist in stores now.