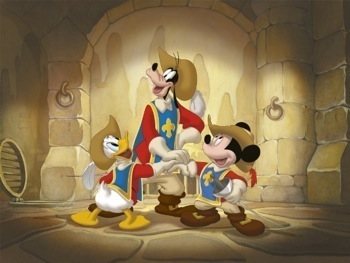 Originally produced as a direct to DVD release, this version of The Three Musketeers tells the basic story in a way that a younger generation can appreciate. Micky, Donald and Goofy start off as street urchins who get robbed by three masked bandits called The Beagle Boys but are saved by The Royal Musketeers, Athos, Aramis, Porthos and D’Artagnan. After a few years, Mickey and Co. graduate to become janitors in the Royal Palace, but dream of becoming the very same Musketeers who saved them years ago. 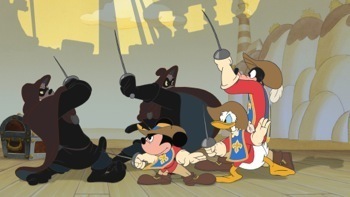 Sadly, the famous trio have a host of issues, Donald is a scaredy cat, Mickey is too short and Goofy is a “doofus” so they don’t make the cut when they apply for the Royal Musketeers. Pete the Musketeers leader tells the three the bad news. They are all downtrodden and sad, yet Mickey continues to pine away for the day when he can join the Royal Musketeers. 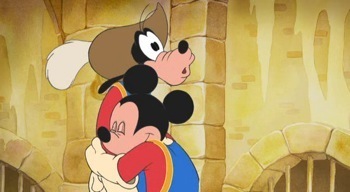 In the meantime Minnie Mouse, the Princess of France is obsessed with finding her one true love. Minnie’s lady in waiting, Daisy Duck, reminds Minnie that she has to marry someone who is from Royal blood, but Minnie says she can not marry someone she doesn’t love.

The Beagle Boys are back and try to drop a large save on Minnie. She survives and The Beagle Boys tell their leader that they failed. Their leader? Pete… The very same Pete who runs The Royal Musketeers. Pete then decides that he will make Mickey, Donald and Goofy official Musketeers, so that the Beagle Boys can carry out their dastardly plan. 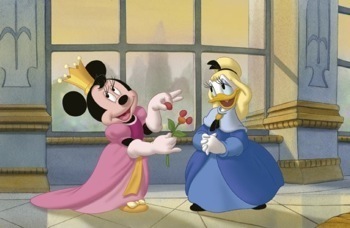 While The Three Musketeers won’t go down in history as a Disney Classic, it’s a fun film that young viewers will enjoy. When it comes to straight to DVD films, the script and animation generally falls short. Here, we fall squarely in the middle. It’s a fun treat to see characters you know so well, in a different setting. 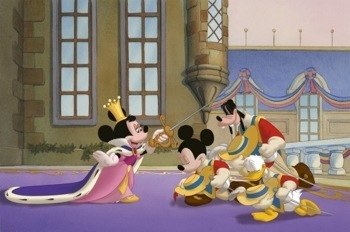 Blu-ray is the prefect medium for animated films, quite literally in high definition the small details pop and look stunning. Here the animation looks shiny and new. The transfer is very well done and the picture quality has little to no loss.

I love to see animated films with extras. It’s a rare treat to see things dusted off the shelf and it’s one thing that Disney does well. 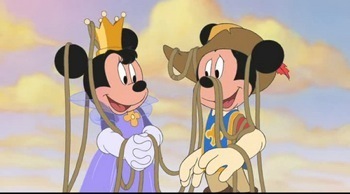 With this release, we get some fun deleted scenes and they even include a commentary track. There is also a behind the scenes featurette which was probably shown on the Disney Channel when the film was first put out on DVD. There’s an interesting little extra that encourages kids to dance during the films opening number and a fun little commentary track with Mickey, Donald and co in character. 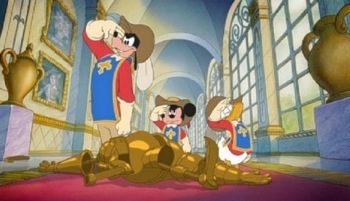 Overall, while not a Disney animated classic like Bambi or The Lion King, The Three Musketeers will keep young viewers attention and will keep older viewers interested. You should definitely check this one out.

Mickey, Donald, Goofy: The Three Musketeers is out now on blu-ray! 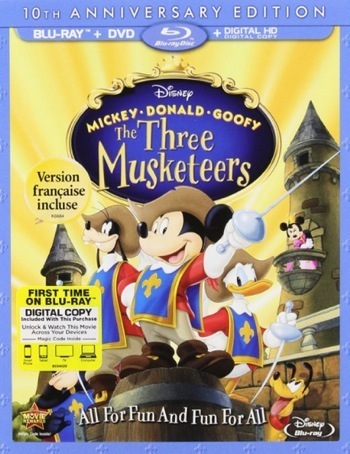