High concept comedies have really been all the rage lately at the box office. You had the Neighbors battling it out in Neighbors, there was Kevin Hart and The Rock in Central Intelligence and not we have Mike and Dave Need Wedding Dates. Based on a “true” story this comedy attempts to switch the format on its head. 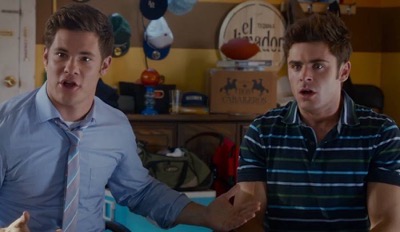 Mike and Dave Need Wedding Dates, out now on blu-ray, takes the male-bro comedy trappings and flips them on its head. Mike (Adam Devine) and Dave (Zac Efron) are two man children who sell alcohol to different bars. They have  along history of ruining family events, like birthday parties, weddings, and now their sister Jeanie (Sugar Lyn Beard) is about to get married. However, Jeanie has put her foot down and together with the rest of their family they stage a mini intervention. 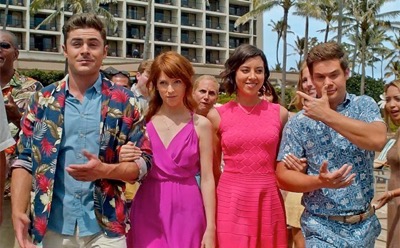 Mike and Dave’s father (Stephen Root) puts his foot down and says that they are not allowed to come unless they bring dates and don’t hit on the girls at the event. They do what any red blooded American males would do, they put an ad on Craigslist looking for two dates to join them on an all expense paid trip to Hawaii to join them at their sisters wedding. The ad goes viral and after a series of failed interviews they meet Tatiana (Aubrey Plaza) and Alice (Anna Kendrick). 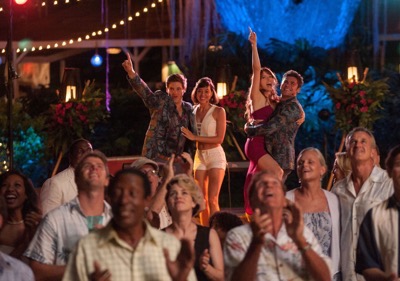 Alice and Tatiana are party girls who just got fired from their bar maid job. Alice was jilted at the alter during her own wedding  and they both decided they need an adventure to get away from it all. They pose as “nice girls” and persuade the guys to take them to Hawaii and meet the family.

Here’s where the formula is flipped on its head. The boys think that they are in control of the situation but in reality the girls are the ones who are riding this gravy train. Both Plaza and Kendrick are awesome in the roles and clearly are having a ball playing up the comedy of the situation. There are some fun moments such as when the two girls convince the wedding part to take part in an ATV tour of the Jurassic Park filming locations. This of course ends with an accident leaving the bride looking a little worse for wear the day before her wedding. 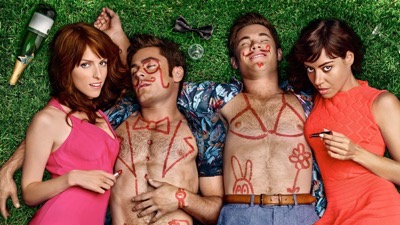 Zac Efron and Adam Devine try really hard in their roles, but their performances don’t compare to the girls effortless style. Adam Devine just keeps mugging endlessly at the camera and at times it’s a tad jarring. Zac Efron does a fine job but he’s more winning in the times that his character has emotional moments, like when Dave gets berated by his father. 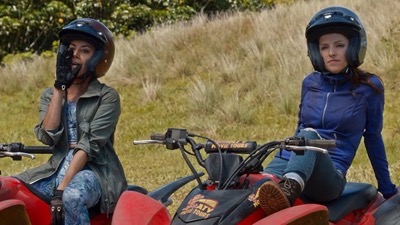 There are some really funny parts in Mike and Dave Need Wedding Dates and I would pay to see a movie with Tatiana and Alice alone. The interesting thing about the film is that the laughs are not constant throughout the film but happen sporadically. It feels a little jerky as opposed to a smooth flow, that’s probably due to the fact that the film had a lot of improv and you can tell. While there are great moments that can come out of improv it can also hurt the flow of the film and that’s sadly present sometimes here. 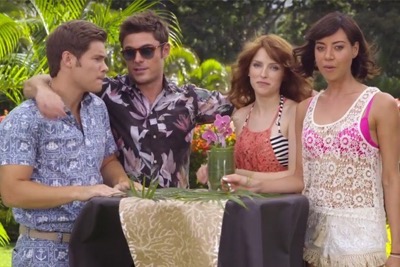 Mike and Dave Need Wedding Dates arrives on Blu-ray in a fine transfer thanks to the folks at 20th Century Fox Home Video. Visually, the film looks great. The contrast between the city scenes and the Hawaii lush landscapes provide the film with a nice balance. The colors pop especially in the Hawaii sequences and the fine details are present throughout.

Deleted Scenes – There are about twenty-three minutes of deleted scenes mainly from the improv sequences and alternate dialogue. Its pretty interesting to see.

Extended Scenes – These are about forty minutes of longer scenes, and again mainly have to do with the improv done in the movie.

Alternate Storyline Pig Sequence – This is a really great supplement. You need to check it out.

Line-O-Rama – This is another look at the improv of the film.

Gag Reel – Running about five minutes it’s a fun gag reel and worth a look.

Funny or Die Shorts – This is a different of promotional spots made for Funny or Die.

Gallery – A set of stills from the movie.

There’s the Theatrical Trailer as well as a commentary track by Jake Szymanski. 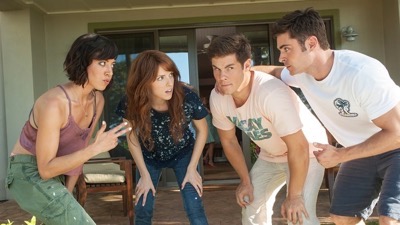 Overall, while I really enjoyed Mike and Dave Need Wedding Dates, the film is inconsistent when it comes to laughs due to the improv nature of the comedy. However, if you can get over that the film is good on its own merits. The actors are really good in their respective roles and bring a lot of charisma to the movie. If the film was tighter, I would have loved it, as it stands I really enjoyed it. I think you’ll really like the journey.

Mike and Dave Need Wedding Dates is out now on Blu-ray!