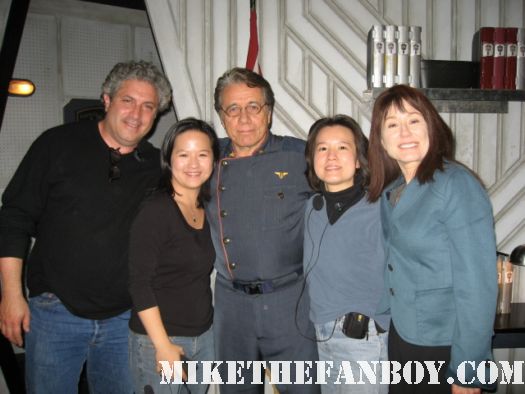 Sigh, what can I say, it’s been a long day. LOL… Anyway, I was talking with Mike the Fanboy contributor and my good friend Erica and she was like… Did you know that Battlestar Galactica: Blood and Chrome just started filming! I was uh… “Of course!” Duh! Yesh! So, in celebration of a new Battlestar Galactica series, (and one hopefully better than Caprica! Don’t you flame me!) Erica and I thought that a look back would be nice… A look back at when Erica had the opportunity to visit the Battlestar Galactica set!

I know I’m jealous too… I mean insanely jealous! Grrrrr… And you will be too… Take a look at the lovely Erica’s experience in Vancouver after the jump!

You know it’s a great day when you get the opportunity to visit the set of one of your all-time favorite shows. Such was the day several years ago when my sister and I visited the Battlestar Galactica set in Vancouver as they filmed the final season.

We were there for a once-in-a-lifetime day and started geeking out immediately from seeing the production offices (amusing signs, promotional material and an original 1978 Cylon!) and just walking around the studio, seeing large pieces of set dressing hanging around.

We walked around the three sound stages and wandered around the Cylon Basestar, (absolutely enormous), Colonial One (really tiny) and the hanger deck (much smaller than you think). We even got inside a viper and learned the secret to how they light the actors (Christmas lights!!). Then it was off to the Galactica herself and we did all the little things you know you’re dying to do — tap the picture of the unknown soldier for luck, answer the phones as “Galactica actual,” drive the ship, sit in the pilot briefing room, etc… ah what bliss! 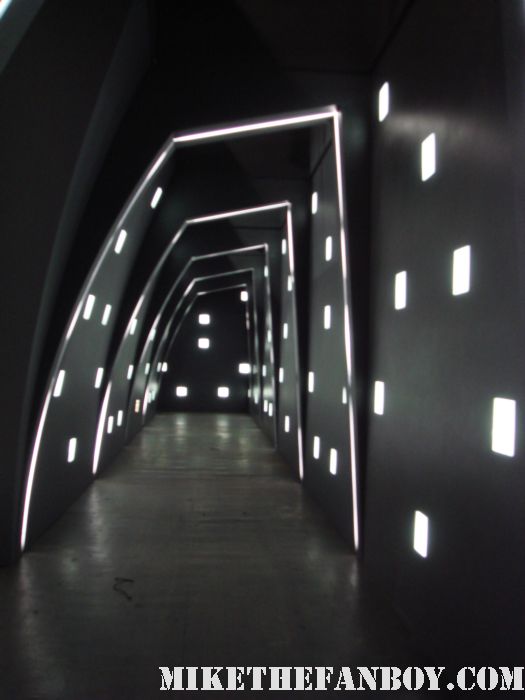 The attention to detail is incredible including the weight of the phones (formerly used in submarines) and the smells (Baltar’s cult lair smelled strongly of Indian spices). 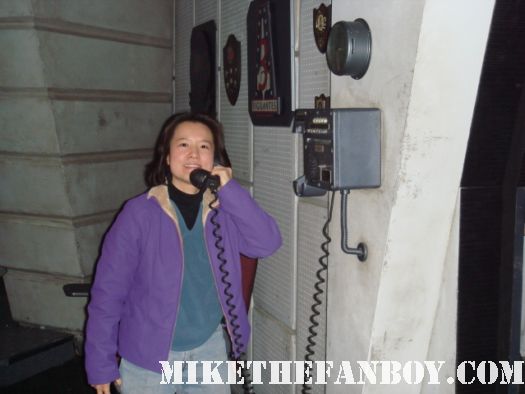 We wandered around the corridors and literally stumbled into some spoilers (they had half of season 4 already done so we discovered first hand that LOTS of things had happened). 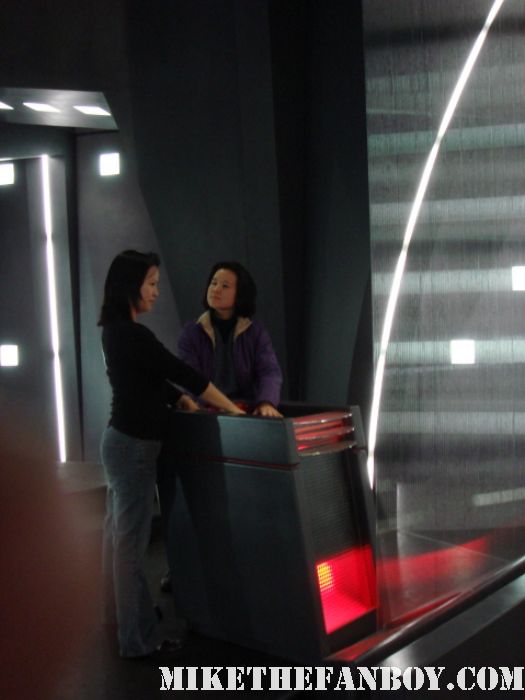 Then we were off to lunch with (and I have to grin like an idiot as I write this) Mary McDonnell and Edward James Olmos in Mary’s trailer. I will admit to a moment of being starstruck when we saw the two of them for the first time in full costume. That doesn’t happen very often, but how would you react if you unexpectedly ran into the Admiral and the President waiting for craft services under an umbrella?

Fortunately, I made a quick recovery and managed to avoid any idiotic babbling (well, nothing more than normal, anyway). They were so nice! Mary = Gracious. Look it up in the dictionary! Both were really kind and approachable so pretty soon we were just hanging out and chatting away. We even hung out in the makeup trailer with Mary as she got a little touch up before filming her next scene. 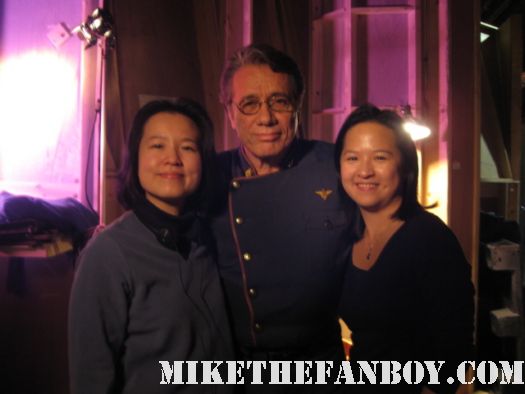 And of all things to see, we were on set the day her character, the rock of this show, basically breaks down and gives up. It was amazing to see her shoot the scene and then come over to chat and laugh with us and then go back and break down again. She is an AMAZING actress.

It was also great to see the director, Michael Nankin, make subtle changes to the shoot and bring something completely different out. Quite and thoughtful and not, well, cursing out his actors with f-bombs (cough! Michael Bay!). 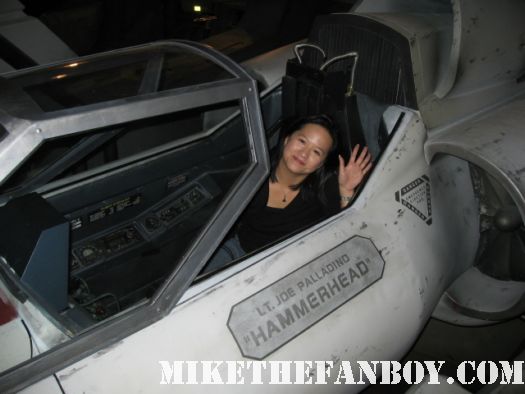 After they wrap the scene, Eddie (yes, that’s what Edward James Olmos asked us to call him!) came over and wanted to know if we’d “seen my quarters yet.” When we said “no,” he escorts us through the ship to Adama’s quarters. Holy crap! I’m getting a tour of the Galactica from the Admiral! 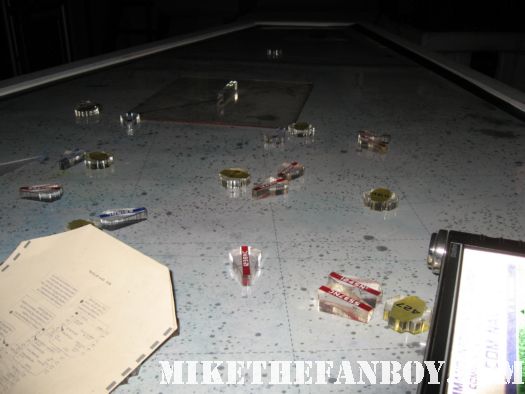 Well, the set for Adama’s quarters is, uh, not dressed. The walls aren’t even flush and everything is everywhere. But here’s our chance to see the original painting of the First Cylon War up close and to also notice some of the interesting titles in Adama’s book shelf. We chat with Eddie a bit more on a whole range of subjects including some tense political situations in the Middle East. This is a man who feels politics deeply. But he’s also a really nice man, so nice that he suggests we go back to the main set and take more pictures. Really, he suggested it!

So we go back and wind up getting a crew member and one of the gaffers to come and spontaneously light us for a couple of pictures. It’s funny, but the light is so soft, we look like we’re in a portrait studio somewhere.

Mary then introduces us to Jamie Bamber and bids us a fond farewell. Such a kind woman! 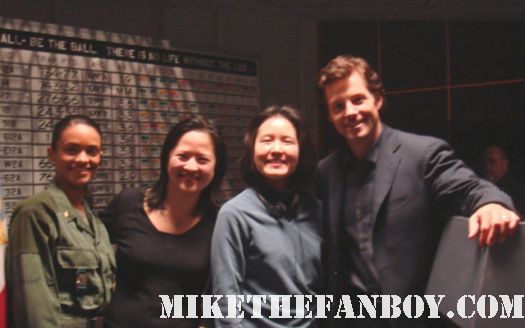 Jamie is really nice and we sit back to watch him and Kandyse McClure film a key scene. This episode is so packed with action that nearly every scene is a key scene, but this moment has a real delicate balance to it so they try it a whole bunch of ways.

In between takes and set ups, we chat with the crew who seemed to be amused by us. Apparently the last visitors to the set were so shy that they sat in the corner and didn’t say anything, didn’t move much. The cast and crew were actually worried whether or not they were having fun. Since we were having a blast, the crew even took us around between scenes to a few more sets on this soundstage. Really, they were so great to us! 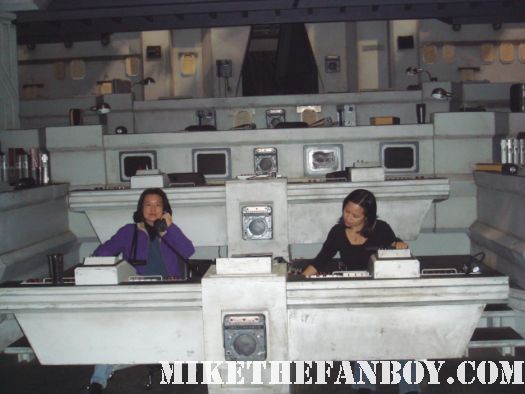 They also explained a few of the gaps in the storyline for us. I hate getting spoilers since I would rather let the storytellers tell me the story in the way they intend it, but there’s no avoiding it on the set. And let me tell you, we had big spoilers!

For the final shot for the day, they filmed various viper pilots in the briefing room. Helo, Athena and Starbuck will be present so we get to meet Tahmoh Penikett , Grace Park and Katee Sackhoff.

Katee we notice right off since she’s joined us by the monitors and is as full of energy and good humor as you’d hope Starbuck would have. She’s friendly and chatty and tells us about her not-so-great experience at a top Chicago hotel. Whoops! 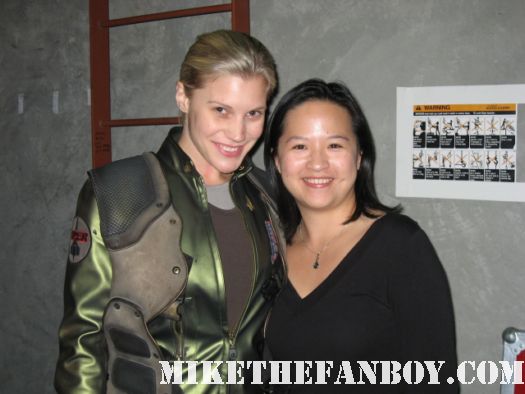 We meet Grace and Tahmoh after they finish the scene. Tahmoh is really nice, but in a hurry and Grace is funny and happy to trade stories about her exorcist trailer (history of weird stuff) and life with a bunch of sisters (we can relate!). 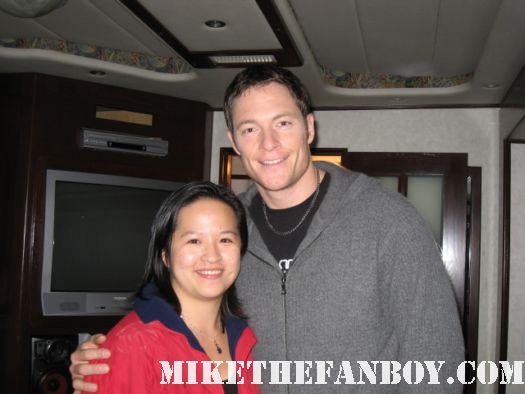 As we head out to the parking lot, we pass by Katee who is wrestling with getting her dog in the car, but she calls out a cheery farewell to us. 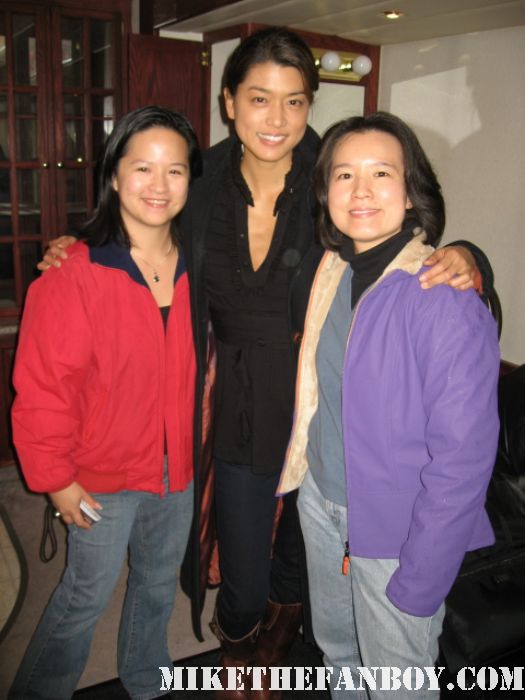 I seriously can’t believe how kind and generous the crew was to us, especially when you consider they were working — and working on some really heavy scenes (season 4 mid-season premiere “Sometimes a Great Notion” if you’re curious) with the shadow of the writer’s strike hanging over them. 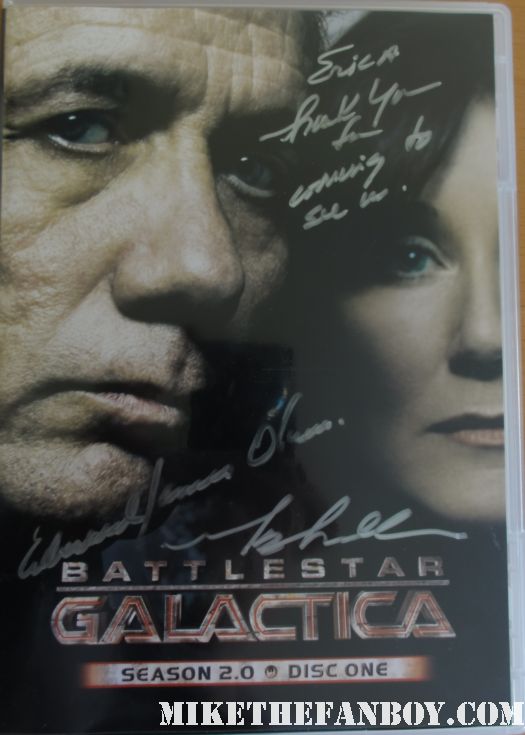 Because of the strike, we had to wait 18 months before we could see the finished product. Yes, a year and a half of keeping secrets that we were dying to discuss with others! Fortunately there were two of us who visited the set so we could talk about it with each other and see how the fragments we saw were a major part of the show’s greater mythology.

Yes, this was a frakkin’ amazing day with a crew that worked smoothly together and took a lot of pride in what they were doing. Of course if you watch the show, you can see why. 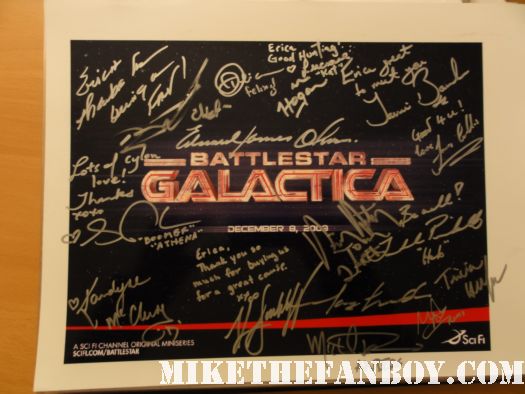