Home / Fanboying! • Mike The Fanboy Flashback • Throwback Thursday / Throwback Thurs! Meeting Alan Rickman! The Harry Potter Star Passed Away Today At The Age Of 69! By Grabthar’s Hammer, You Shall Be Avenged!

I, like most of you were shocked at the passing of Alan Rickman. I’ve always been a fan of Alan’s. He just brought a certain taste and class to any film he was in. Personally, my favorite’s among his stellar list of credits were Love Actually and Galaxy Quest! I will never tire of those films. Such classics.

Of course Alan was also in Harry Potter, Diehard and Robin Hood: Prince of Thieves among so many others.

I, cinema and movie lovers everywhere will miss Alan dearly.

Check it out the flashback after the jump!

A dark alley, an inch of water, and a freezing cold night, yes, this is my life. Today, or tonight I should say, I’m back in the infamous alley trying to get Mr. Alan Rickman who is appearing on a television talk show. Many of you may know Mr. Rickman as Severus Snape from the Harry Potter movies, he also appeared in Diehard and Robin Hood: Prince Of Thieves… (And Call off Christmas!) but I’m most fond of his work as Alexander Dane in Galaxy Quest one of my all time favorite films. Also appearing on the show tonight is Dennis Leary who I love in The Ref! It’s one of the movies I watch every holiday season.

5:22 p.m. – I’m late as usual. Oh well, I figure there won’t be many people today because it’s not like Alan Rickman is a huge name. I have my Galaxy Quest UK mini poster with me. I’m excited because I have wanted Mr. Rickman for a long time, and have been a huge fan of his.

5:32 p.m. – Holy crap! There are about 20 people here! I still got a good spot in the makeshift second row but damn. I didn’t think there would be anyone here! Dennis Leary is on the show as well, and I brought my The Ref DVD for him. I’ve heard both Dennis and Alan are tough to get, so hopefully I will be successful.

5:55 p.m. – It is damn cold… I mean damn cold. It’s nice if you’re under a blanket, but standing in an alley not so much. I just noticed I am standing in a puddle of water. That’s perfect pneumonia before Christmas. It’s the gift that keeps on giving!

6:22 p.m. – Oh! Alan just arrived, and he is ignoring everyone. He gave a faint flip of his hand to the crowd and just walked on off. This does not bode well. And my pants are now wet from the puddle. Nice.

6:30 p.m. – I’m feeling less than optimistic and I’m thinking about going home. Yet strangely, I just can’t move my legs. Is it the cold or my damn stubborn nature?

6:44 p.m. – Oh, there’s Dennis Leary, everyone is calling out for him, and he just walked right on over. 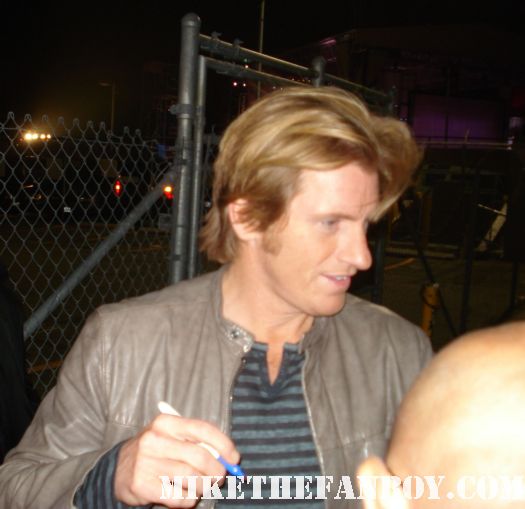 He is extremely friendly, which is really cool. I haven’t heard the best things about him, so this is nice. 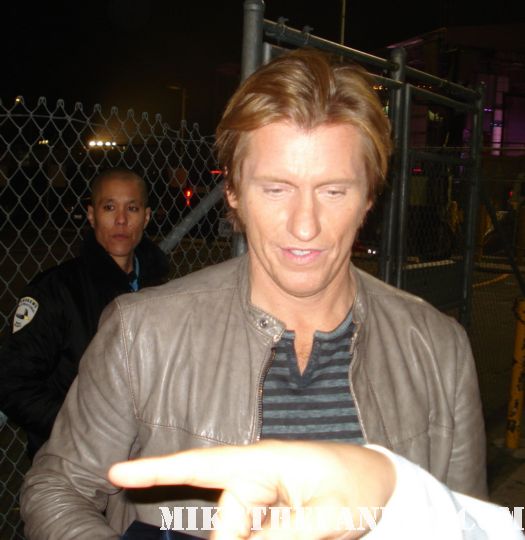 He just signed my The Ref DVD and a lot of people are getting pics with him, but since I am in the second row it’s kind of hard. Ah, that’s okay. 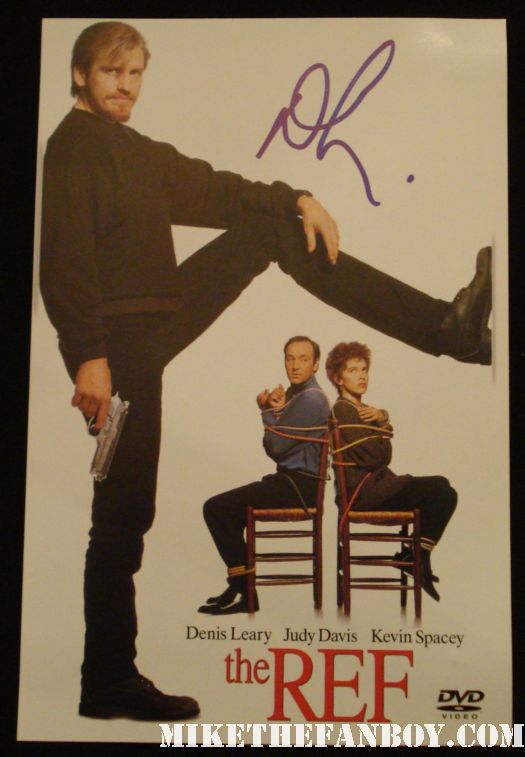 6:55 p.m. – At least if Mr. Rickman doesn’t come over then I’m not walking away empty handed. I did get Dennis Leary, which is cool. I’m glad he was a nice guy. 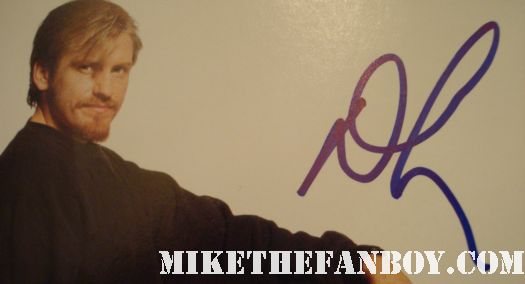 7:05 p.m. – Keane, the rock band, is sound checking. They are performing on the outdoor stage. I have their second CD somewhere in my house, but I don’t like them enough to dig for it and try to get it signed. Plus, I was hoping that I would get Mr. Rickman in the beginning so I could go home. Alas, that did not happen. 

7:30 p.m. – The taping is running late. I will probably be at least an hour before he comes out. Water has seeped into my shoe and is now soaking my jeans.

7:45 p.m. – They are showing the television show on the side of the building for everyone waiting for Keane. Dennis Leary is still on, and Alan hasn’t even started yet. Did I mention it is damn cold? I mean cold. 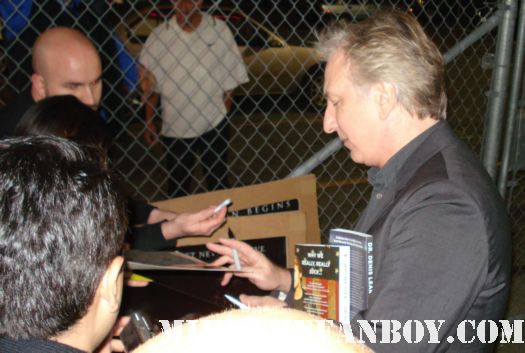 Alan is spending a lot of time signing on the far end of the line. He’s really taking his time. Someone asks him if he will sign his Harry Potter poster. Alan says, ‘I do not sign Harry Potter.” Thank God I have Galaxy Quest! He’s making his way over, and promptly misses me. Grrr… I keep trying, and he’s signing on the other end now. 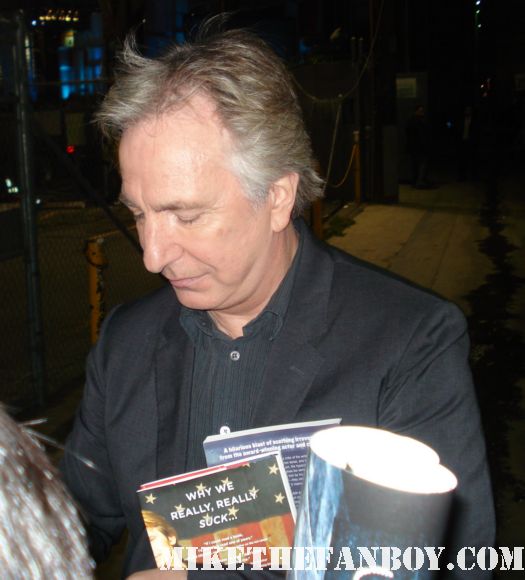 A woman asks if he would sign this Harry Potter photo for her 5 year old. He looks down at the photo. Looks at the child, and simply says, “No.” Only as Alan Rickman can. lol… He just got the guy in front of me, and I am finally in good position. Yay, he finally signs my poster. I thought I was going to miss him! I told him “Thank you very much.” 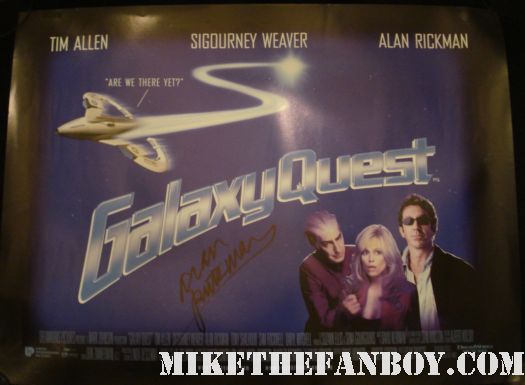 He looks at me, as only Alan Rickman can, and says, “You’re welcome.” He signs a bit more and someone asks him why he won’t sign Harry Potter items. His reply, “I will sign when the whole thing is done.” Before he leaves, he starts taking pictures and I ask him if I can get a pic, he is very gracious and let’s me snap a picture and he’s even smiling! 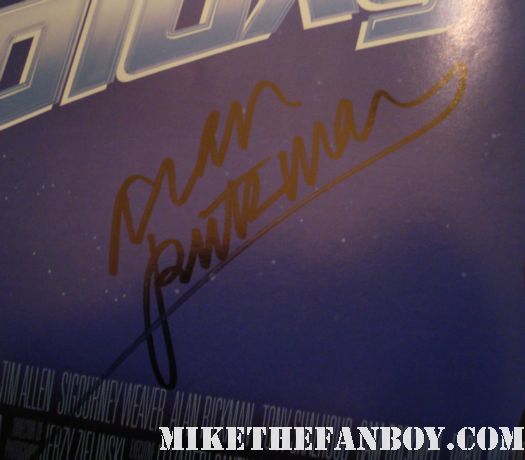 Whoo hoo! Even with the cold, the puddle, and all the other effort it was worth it! So cool and he was very gracious with everyone taking a lot of time to sign. Everyone got at least one thing signed which was extremely generous of him. 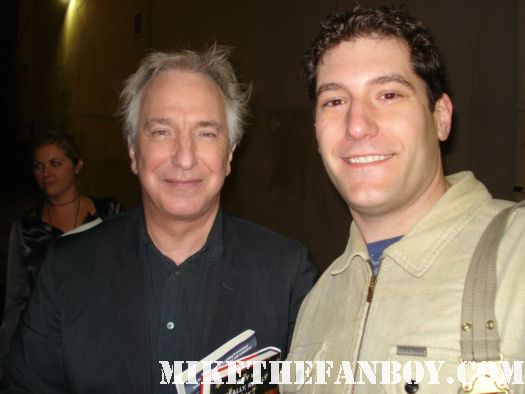