Fandom takes a lot of forms, and while we do a lot of celebrity meetings here at Mike The Fanboy and autographs and such, one other thing I enjoy doing is visiting filming locations. Now, I’m no Lindsay from I am not a stalker.com because I bow down to her as the master! However, I like to think of myself as a novice Lindsay! And this year for the celebration of my birth a couple friends of mine including MTF’s The Lovely Erica, Annette, and Scott headed off on a filming location adventure.

I didn’t plan it out this year, but The Lovely Erica and Scott did the planning and tried to get some locations that are synonymous with Mike’s Favorites. Now, I left off the Buffy The Vampire Locations because we are going to do a whole post on the Buffy The Vampire Slayer filming locations, so forgive the Sunnydale T-shirt. However, there are lots of fun stuff in this post, so take a look at all the craziness after the jump!

The first stop on our whirlwind adventure was a small restaurant located in Pasadena CA. This restaurant is now a chain called Carrow’s but you might know it from the hit 1984 film The Terminator starring Linda Hamilton! 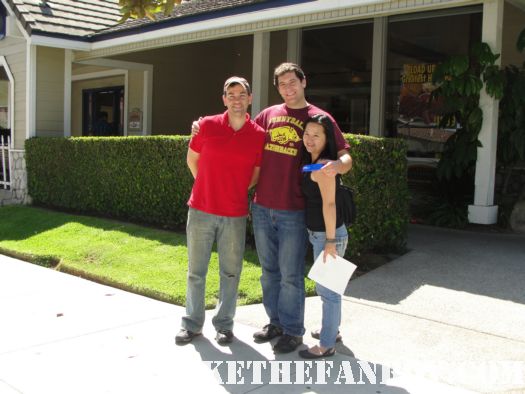 This is the restaurant where Sarah Connor worked before being stalked by the giant menacing Terminators, and a whole film before Robert Patrick scared me for life after turning into liquid metal. 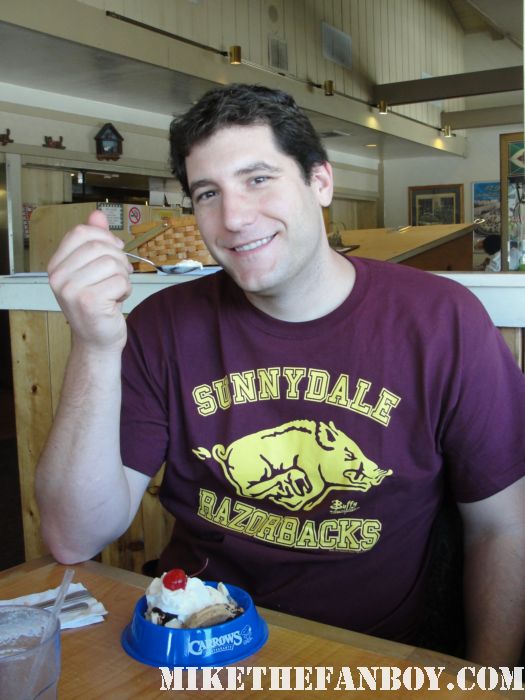 I had to get the Snoopy ice cream bowl. 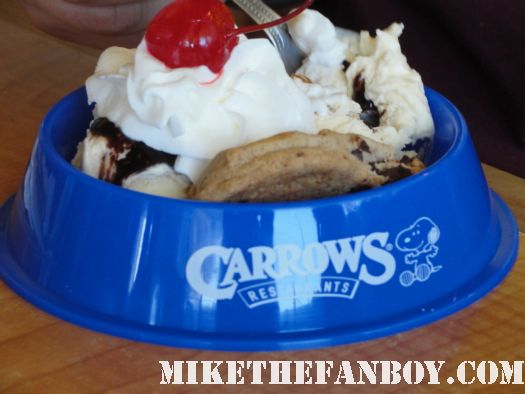 Ironically, this is now Theo’s dog dish, I mean hello it fits perfectly right? RIGHT! You can still get a great burger here and the interior looks almost as it did back in 1984…

Next, and this is slightly random but still pretty cool. This is the driveway from Clue: The Movie. Now, all of you know what a huge Clue: The Movie fan I am, and honestly this is the last remaining thing from the sets of Clue that remain. 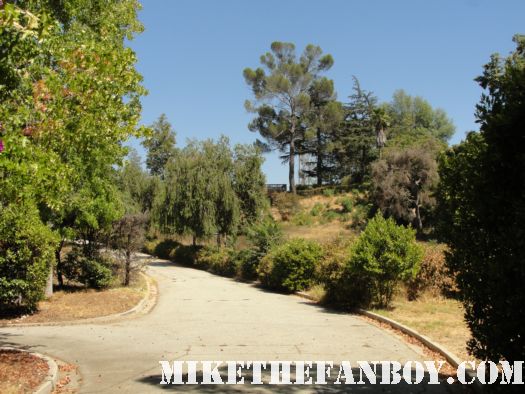 The house itself was actually never there! The exterior of the house was a matt painting that was placed onto the empty lot in post production. 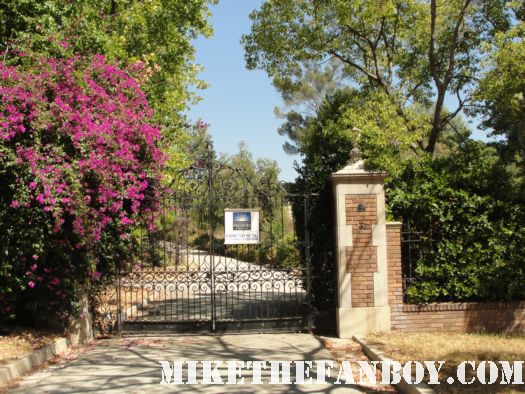 “Why is the car stopped?”

I love it. And once you are on this street you know exactly the scene I’m talking about! Classic!

So, then we took a drive down to Pasadena or is it Altadena? Anyway, This was such a highlight for me, but it’s Don Draper’s house from Mad Men. I love me some Mad Men, it’s simply one of the best shows ever. Simply put… Ever… 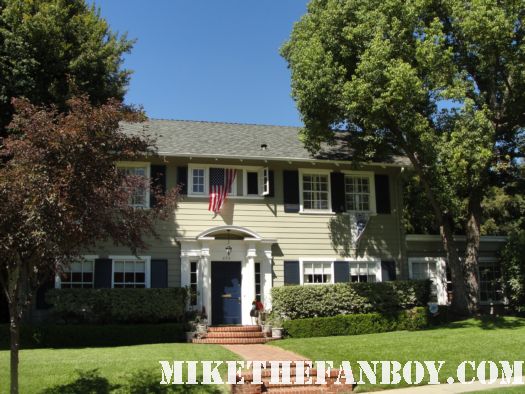 As you can see the front door isn’t actually red, but blue. Everytime they film at this location the paint the door red of all things. Crazy. The interiors for the kitchen were actually shot on location for the first couple seasons but then moved to a studio where the sets were identically matched. 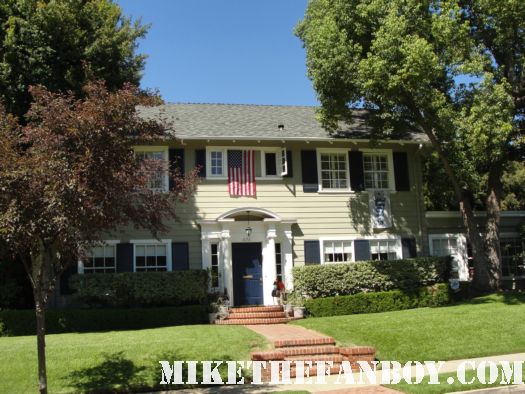 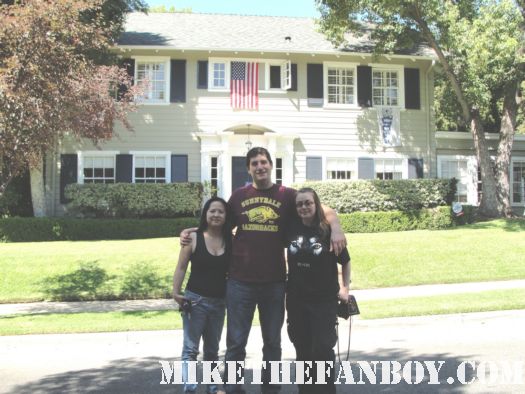 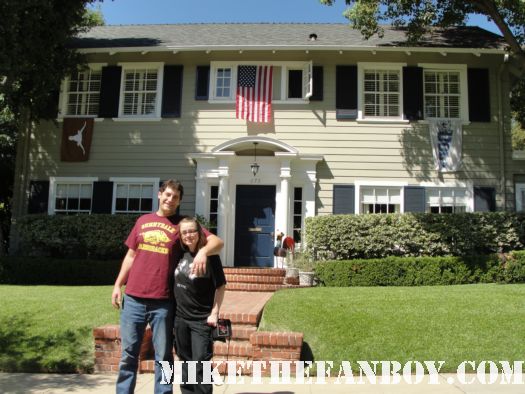 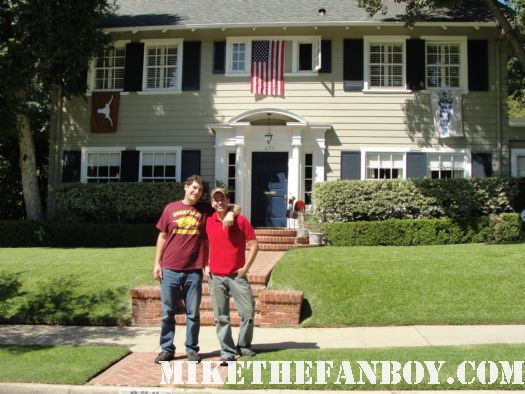 Another favorite of mine, if you couldn’t tell is HBO’s True Blood. Now, most of the sets are either on the WB Burbank Ranch or on the main lot. But in season two Mary Ann the Maynard had a huge expansive property. It’s located in Pasadena and we simply had to go visit. Complete with props because what set location visit is complete without props? 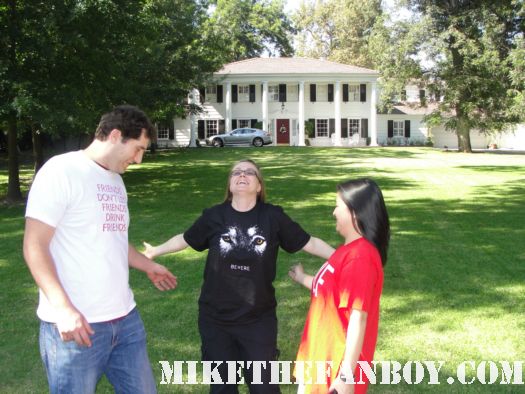 Annette, Erica and I had to get our True Blood on with our fancy T-Shirts. Thank you Comic Con! 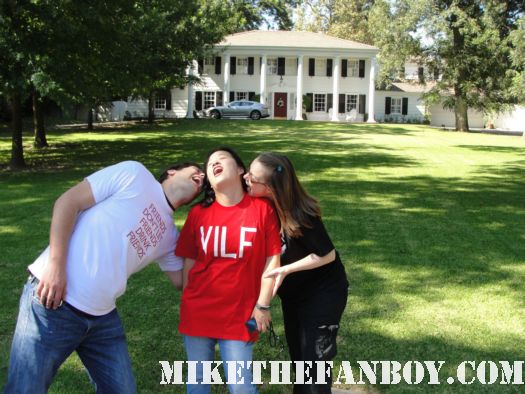 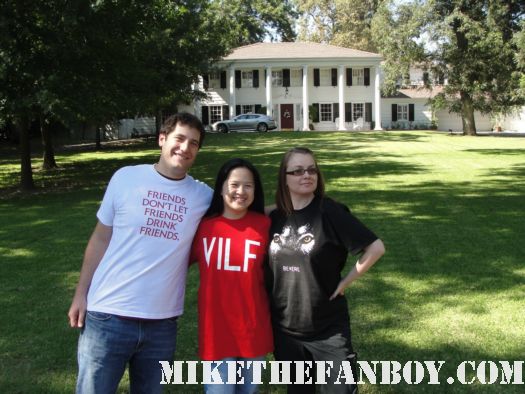 After that fun visit It’s time to take a ride on the Holiday Road! Yep, the house from National Lampoon’s Vacation! THE CHEVY CHASE CLASSIC! The funny thing is I would pass this house all the time when I lived in Los Feliz and would walk up the hill to the Greek Theatre. I would always take a second look at this house because it looked so familiar. 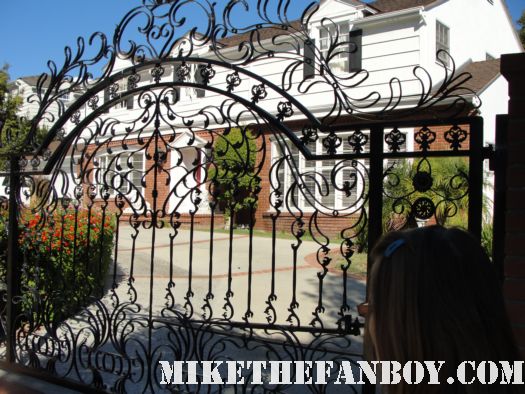 Now, I know why! It’s iconic! Crazy enough it is nestled in the hill and you wouldn’t even guess it’s supposed to be in Chicago. That’s the magic of Hollywood folks! The great thing is the house looks exactly the same as it did back when the film was first shot! 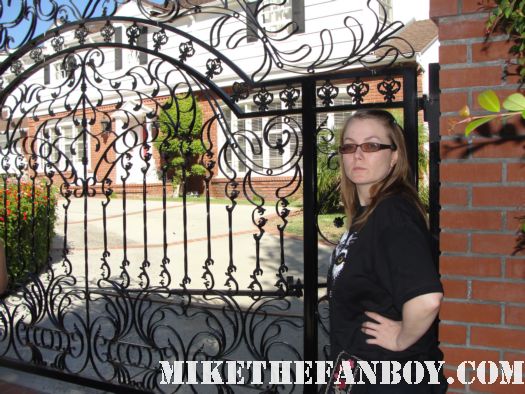 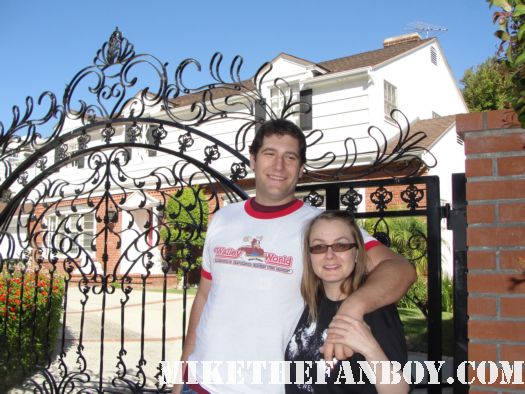 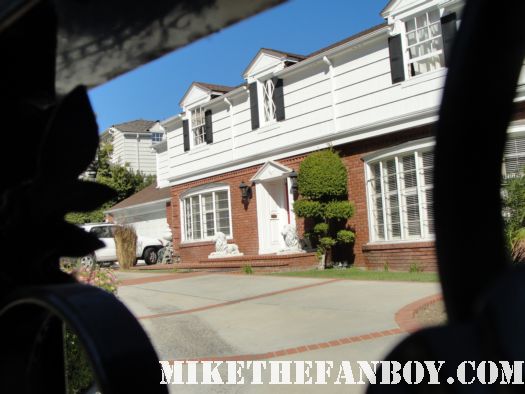 This is another fun location… Walt Disney’s Tron! Well, to be more specific Flynn’s arcade from Tron and it’s sequel Tron Legacy. In all actuality it’s a florist or a cafe… Wow, the old memory really isn’t like it once was. It’s instantly recognizable and you can see the exteriors so clearly in both films. 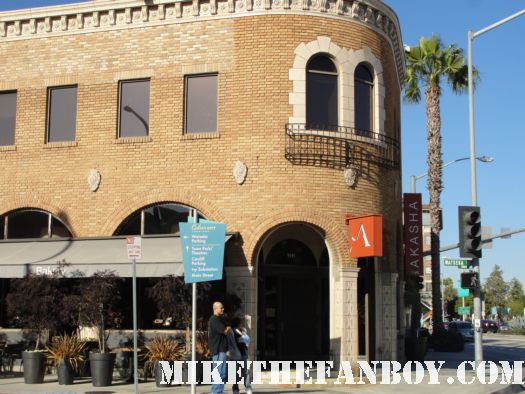 It’s so great when you have a location like this that hasn’t changed all that much since the original shoot over 20 years ago! 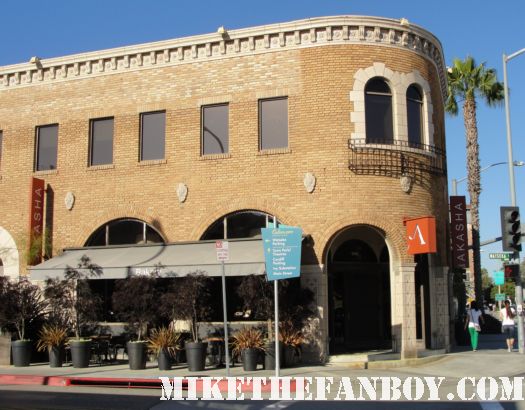 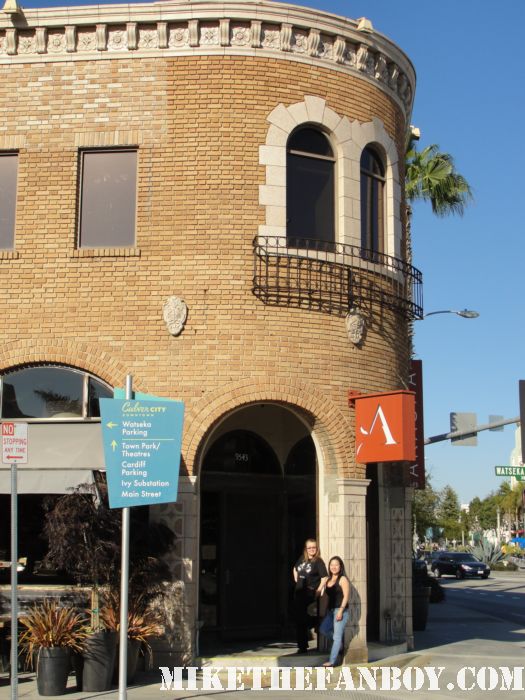 Now, we are off to Culver City… Whoo hoo! This is the site of our next three locations. And you might be able to figure it out by now, or you might not… I can only be talking about the Modern Family houses! Each of the houses are within a mile of each other and right near the Fox backlot. 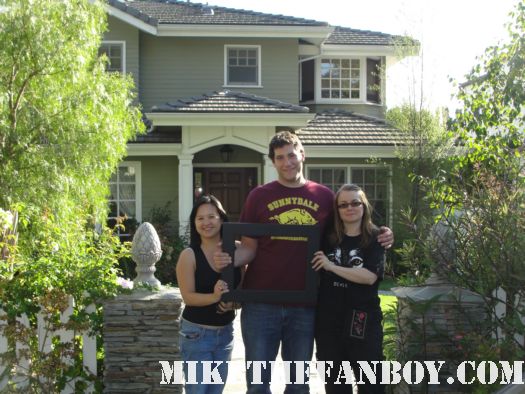 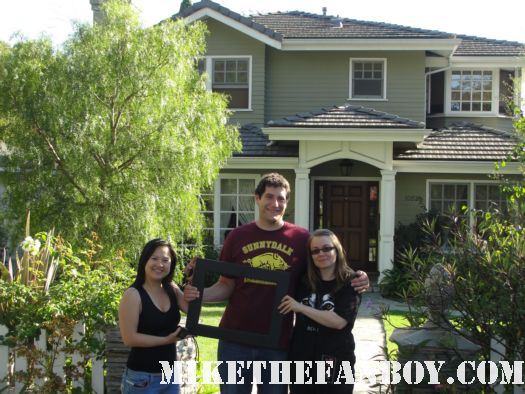 The first house on our trek is the home of Julie Bowen and Ty Burrell.. It’s the Dunphy house! This is the home of Claire and Phil and all their gaggle of children.

It’s always nice to be able to visit shooting locations that look exactly like what’s on film. Since Modern Family will probably be on for years, I’m sure this house will be used forever.

Then we headed over to Cameron and Mitchell’s house. 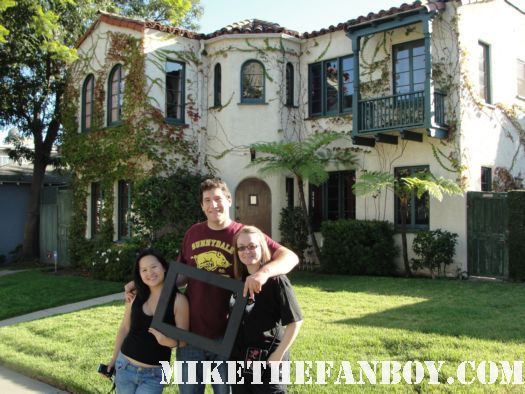 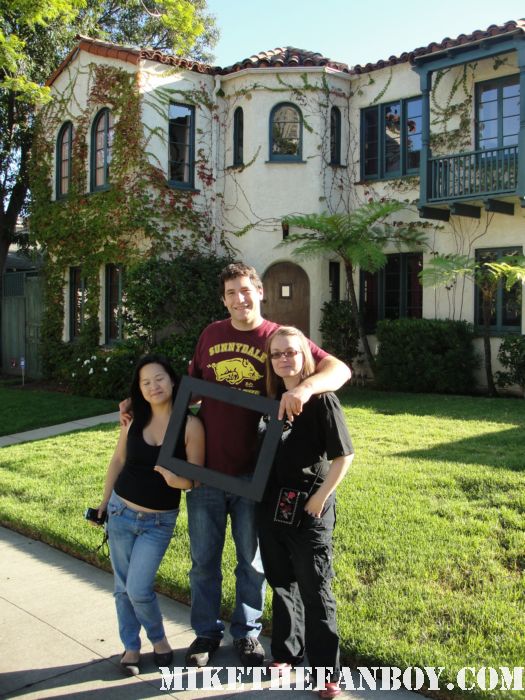 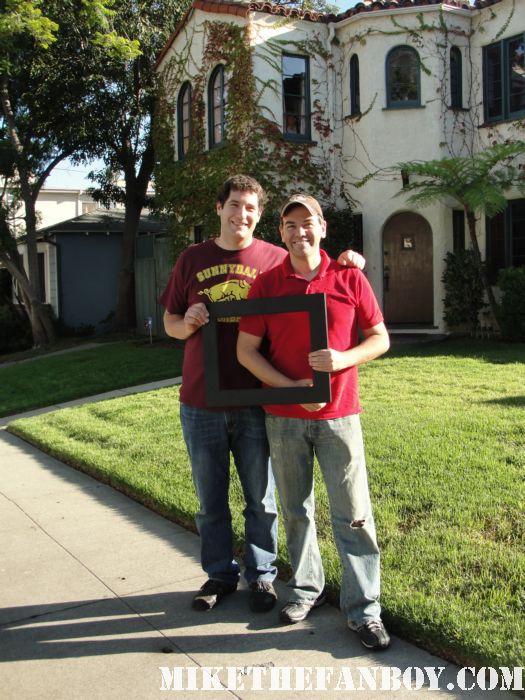 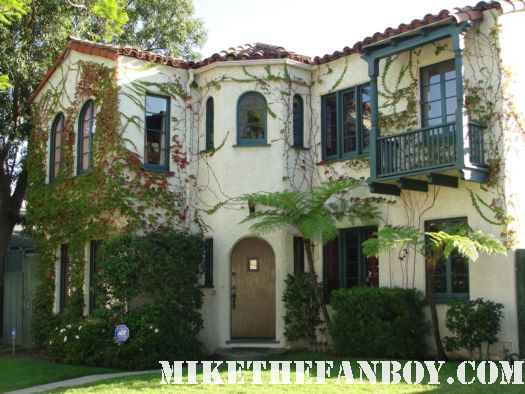 This is the most visible house out of all the Modern Family homes.

And finally we headed over to Jay and Gloria’s home. This house isn’t as accessible from the street but still you can tell what the house looks like. 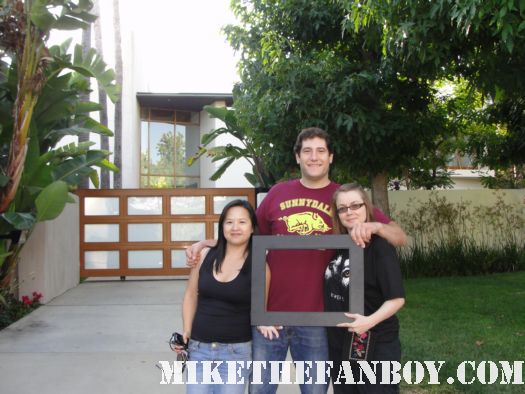 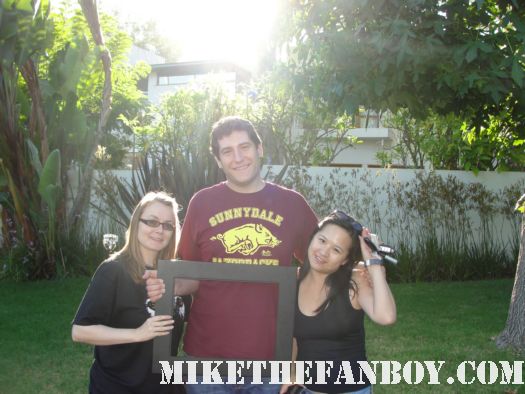 For our last location, we headed over to another favorite of mine… CLUELESS! This is Dion’s house where Cher picked up Stacey Dash as they headed off to school.

We again brought some fun props and dressed up Annette in a feather boa to simulate the movie poster! She looks great! 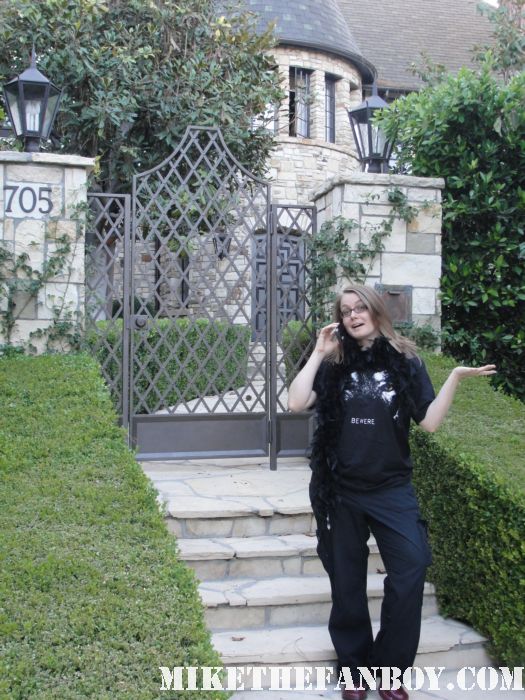 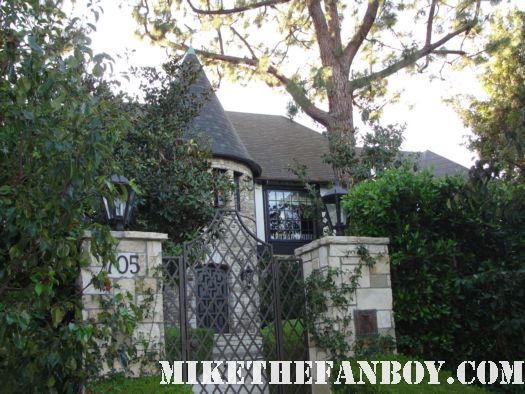 And that as we say is that. Keep an eye out for our guide to the Buffy locations coming soon as well as more fun Mike The Fanboy location shoots!