Billy Beer and I might make fun of each other a lot, but here’s a motto that we live by.

They are words to live by.

Now, I just had another one of my brilliant ideas… I saw that Mindy Cohn was doing a one night event but it was on Valentine’s Day. I couldn’t go, but Billy Beer was just drinking at the local Chilli’s trying to make friends and talk about his former beard.

So, I figured, Hey! This is a fun event for Billy to go to, and in the meantime he could bring my Facts of Life lunchbox and vintage TV Guide to get signed. Jennifer Tilly would also be there, but let’s be honest, it was a Mindy Cohn emergency. And my last couple times seeing Mindy were not successful.

It was super nice of Billy to head out and bring my stuff! Mucho gracias!

Welcome back to Billy Beer’s Barstool. Today we are off to help complete the task of a desperate man trying to complete his Facts of Life lunchbox. Once again Mike has called on his secret weapon to complete a job he was unable to do. He had to find someone that would not only attract the attention and kindness of one Mindy Cohn, but would be able to keep his cool and not recite every favorite part of every episode of every season that he just finished watching for the millionth time. It’s time for Billy Beer to work his charm, and in the mean time get the lovely Jennifer Tilly while he’s at it. Let the adventures begin.

So like many of you might have read, I met up with Mike at the Bruce Campbell signing, or as I like to call it “The event where Mike begged me nonstop to get Mindy Cohn for him and while he’s there begging, get Bruce Campbell’s signature” His only saving point was he told me Jennifer Tilly was going to be there too. After finally getting some pictures, stopping at the bar for a couple of beers, I made my way to the event hoping not to spend any more time than needed.

When I get there, the venue had 3 different exits, GREAT! I try to position myself between 2 of them, and wait for the event to end. When it finally ends, people are coming out and I notice a few people standing by a door. Time to investigate! I ask the people if they’re waiting for the people to come out, and they said “yes”. Found the spot. A tall lady then popped her head out and asked people who they were waiting for. I tell her I’m not family of friends, but I was hoping to meet Mindy and Jennifer, and showed her the lunchbox I was hoping to get signed. she was really nice and informed me that they were still inside, but they were still talking to people.

After the other people went in and left, I was still there waiting. The lady was nice enough to give me updates throughout. Finally the door opens, and I hear talks about the lunchbox, and the Mindy comes walking out. Now I’ve been told Mindy is tough, but she couldn’t have been nicer. She was all excited to see the lunchbox (which I guess Pinky already had her sign at the Paley event that Mike STILL has the article up on his site) Then I give her the original TV Guide Mike gave me to sign too. I told her about my friends who were at the Paley event and wore crazy T-Shirts. She remembered, and we talked about how crazy that event was. 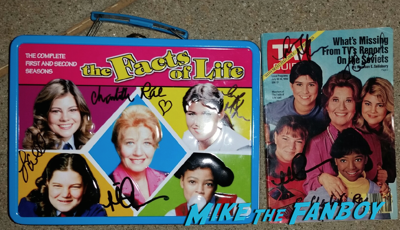 When she was done signing, I got a picture, and then she went back in. 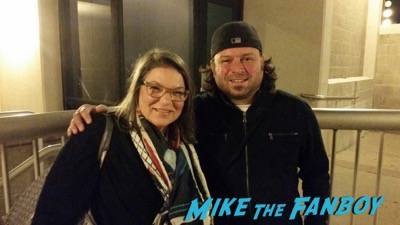 Now I wait for Jennifer. Next thing I know, she walks out the door and comes right too me. She thanks me for coming out, and I tell her I had last seen her almost exactly a year before at the Writers Guild Awards. She remembered the event, and then I ask her if she would mind signing a picture. She gladly does it and recalls it was taken right as she turned Pro at poker. I ask for a picture which she also has no problem doing. In fact it was here idea to take a second one in case the first one didn’t come out. She must know me and my track record. 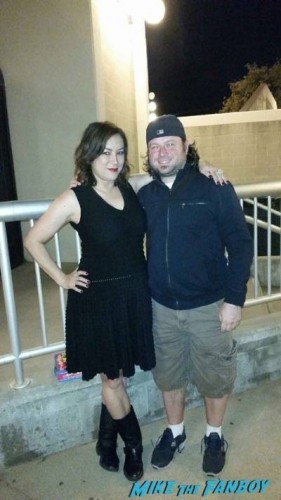 Well, now it’s time for the 50 minute drive back to The Valley. My bitch work is done. I recommend sending Ace to get Kim Fields! Until next time.