With the way our world is going these days, it’s hard not to look at technology as both friend and foe. Surely, this has been mined in films before, from 2001: A Space Odyssey to The Net to even last years Ex-Machina, and now we see it in the new film Morgan. It’s a ripe mine field and one that will be mined even further as we go down the rabbit hole of technology and how it relates to our society now and post election. 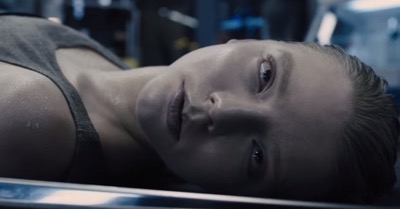 Morgan, the new film from Ridley Scott’s son Luke which is also produced by Ridley Scott is a visually arresting picture that shows finesse for someone who is behind the lens for the first time. The film however doesn’t fully gel in the end as the plot goes off the rails.

Morgan (Anya Taylor-Joy) is an AI. She is only five years old but has the body of an adult. There is a violent exchange that the viewer witnesses from overhead, there is something sticking out of an eye socket and clearly it was a battle. Morgan, as we come to find out, has stabbed a scientist named Kathy Grieff (Jennifer Jason Leigh) because she has advocated for Morgan to not be able to leave the lab where she lives. 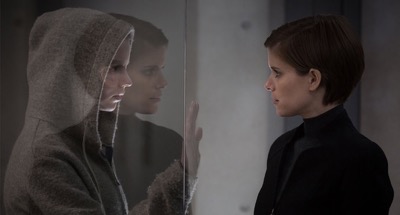 This has drawn the eye of the corporation which is funding the AI experiment, they have sent an investigator named Lee Weathers (Kate Mara) to find out what is going on. Lee is an outsider walking into a family that have been working together for such a long time. The scientists have developed an emotional bond with Morgan and who become protective in different ways. Simon (Toby Jones) is a make shift father figure and sort of in charge of the lab and Amy (Rose Leslie) has been acting as an older sister and mentor to Morgan helping her by taking her to see the world in real life.

Morgan is not the first AI that this team has experimented with and we get hints that other “creations” have also turned violent and possibly killed people. Then a psychiatrist arrives named Alan Shapiro (Pal Giamatti) who is tasked with figuring out if she is mentally stable. This is when the film takes a turn, Morgan escapes and that leads to a chase sequence through the woods and that leads to a not so shocking twist. 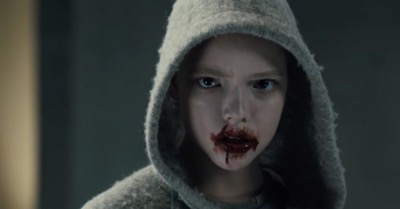 The thing is, when it comes to filmmaking there are always those films that sort of duplicate each other, Volcano and Dante’s Peak, Ants and A Bugs Life, it happens either on purpose or by the creative juices in the air. Here, Morgan has to be compared to Ex-Machina and sadly the latter film is superior. The “shocking twists” here come off as kind of silly and almost work against the plot. It’s almost like with the way the film is shot and the plot twists that Luke Scott was trying too hard to live up to his father’s reputation as a visual artist and filmmaking genius. It’s a hard thing for anyone to live up to, but here it’s almost like you can feel the weight of that pressure on the screen. 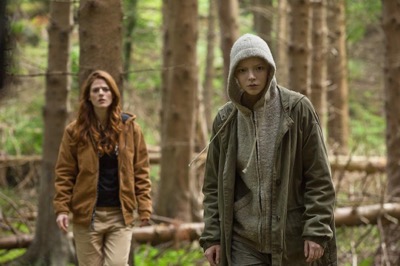 On the positive side even with the films flaws you can see the filmmaker’s potential and once he finds his footing, I think he’ll deliver some interesting work. Sadly, Morgan may not go down as his freshman opus. Flawed as it is, it’s still worth taking a look at though. There’s still a lot of things that are interesting, including the camera angles and some different visuals. 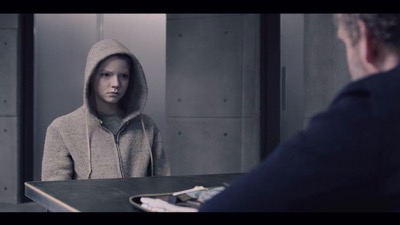 Morgan arrives on Blu-ray in a fine transfer thanks to 20th Century Fox Home Entertainment. There is some saturation in the picture quality which has to do more with the filmmaker’s choice rather than the transfer. The laboratory sequences are very darkly lit and minimal while the outdoor shots are bathed in this yellow hue. Details are pristine and watching the film on blu-ray does help see the more emotional aspects of the film.

Modified Organism: The Science Behind Morgan – This is a featurette that goes into the overall science behind the movie.

Deleted Scenes – There are about six minutes of cut scenes.

Loom (Short) – This is a short film that Luke Scott did which led to Morgan as a feature length film.

Audio Commentary – This is a track by Luke Scott director of the film, there’s some interesting tidbits and behind the scenes tidbits.

There is also the original trailer and a gallery of stills.

Overall, I thought that Morgan missed the mark a little, there are a lot of good ideas rolling around but it’s just weighed down by a lot of first time directorial pressure. It’s worth a look for true sci-fi fans however, but I would find anyone hard pressed to not compare this to Ex-Machina.

Morgan is out now on Blu-ray!