Of all the movies coming out this year, one of the movies that might be flying under the radar of some filmgoers while eliciting hyper fandom in others is Mortal Instruments. There is a huge built in fanbase for this movie due to the fact that the book is huge!

The Lovely Erica is one of the ones looking forward to the film and while attending Wondercon earlier this year and was super fortunate to pull the golden ticket to get into the cast signing.

Check out her full report about meeting the cast below!

This was a crazy signing at WonderCon with a ton of folks in line and many tears of joy and loss as we all pulled lottery tickets to see if we could get into the signing. I was lucky enough to win the lottery (!) Woo hoo!

For the panel, Cassandra Clare (author), Herald Zwart (director), Lily Collins (Clary), Jamie Campbell-Bower (Jace) and Kevin Zegers (Alec) were all here to represent and everyone but Herald joined the signing.
As I entered, a few folks were already meeting the cast and getting giant one-sheet posters and books signed. They were also getting hugs and handshakes from the cast. Apparently there was a VIP signing and these lucky few got to go first.

Me? I was a regular person so instead we got mini-posters signed – which I much preferred anyway! This is one of those private signings so you are not allowed to get anything else signed nor can you take pictures. However, I had a sneaky helper with me that day so I was able to sneak a few shots. (Thank you helper!) 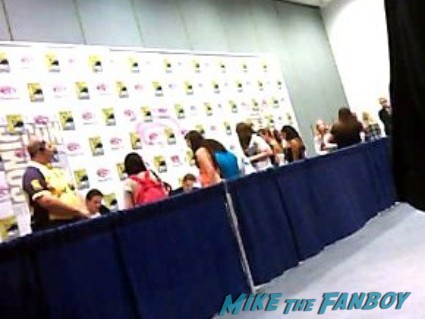 Others played fast and loose with the rules as a few girls elected to get books signed instead – and were promptly escorted from the room and had their badge revoked. Gulp! Several girls were doing this so it really does show that this film opening may be a bit nutty with some fans ready to go for broke with the rules!

When I get up front, I mention to Cassandra that I’ve just started reading the books. 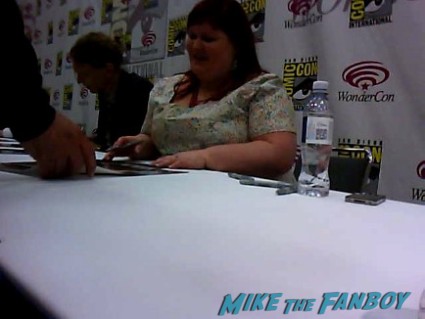 In turn, she’s really curious to see what I thought about the panel and clips since she mostly talks to book fans. 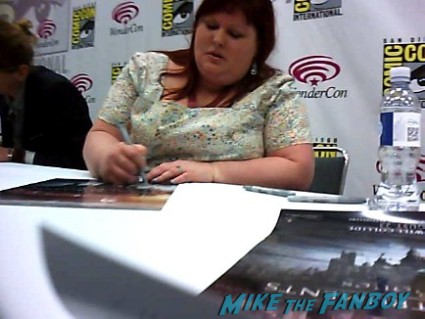 Alas, I couldn’t answer her about the panel since I was at the signing…it’s extremely rare you can do both! 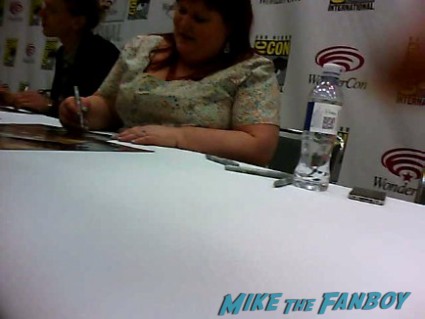 Next up was Jamie who was very easy to talk to. 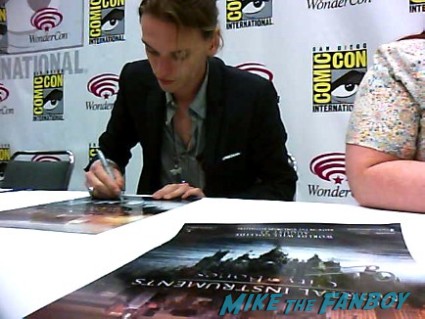 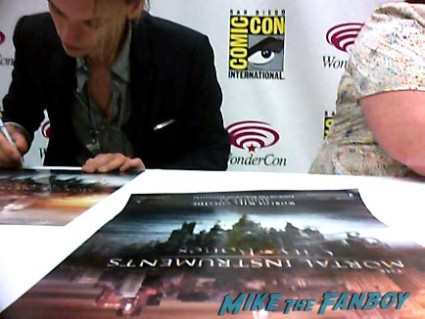 I mentioned how I loved Sweeney Todd (he played Anthony) and he talked about an album he was working on. Of songs with guitar…(?) 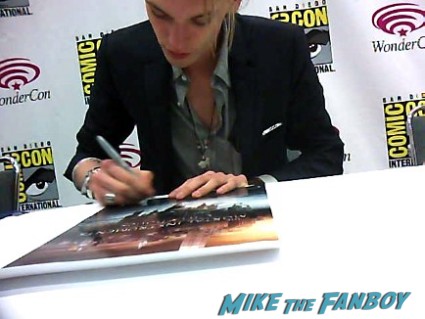 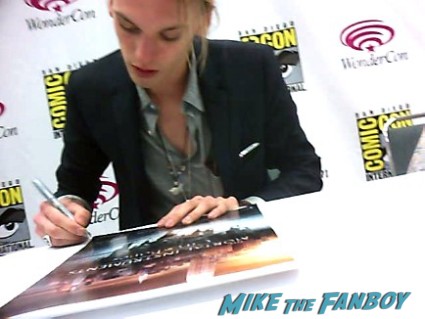 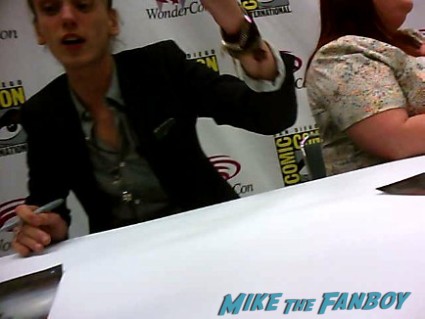 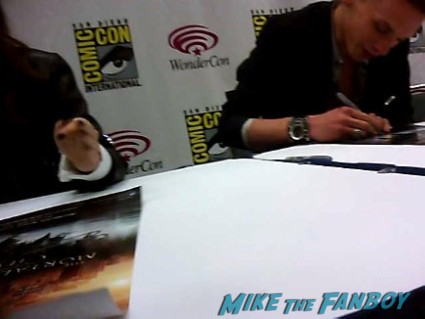 Lily was next and she glowed pale in the florescent light of the room. 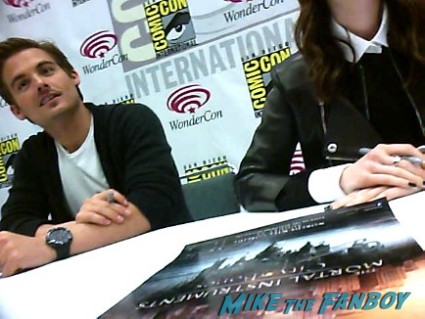 She and Kevin sort of chatted to people together and they were both friendly and talked about the long road ahead until the movie comes out at the end of summer. 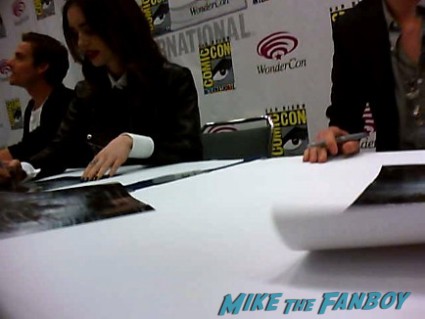 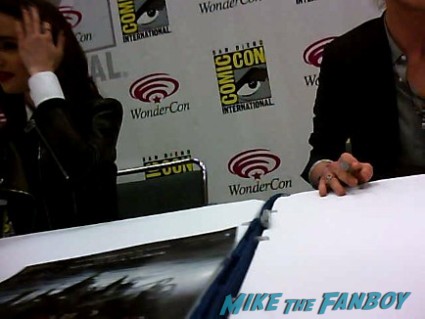 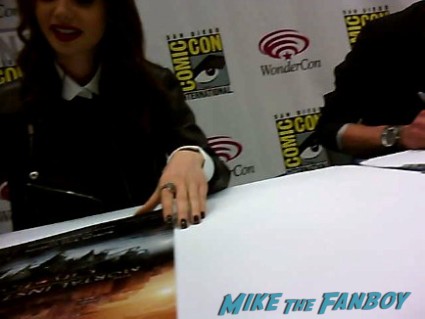 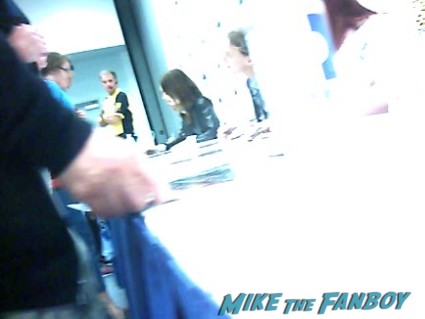 With that, the signing was at an end. A very quick and fun moment with the some cast members. Check out the trailer now for the movie which is out in August! 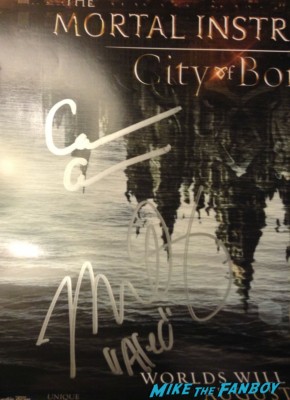 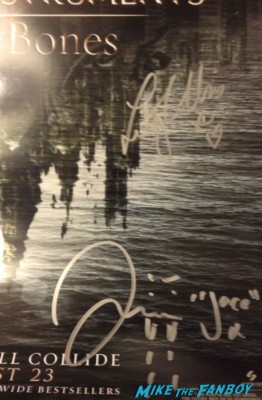 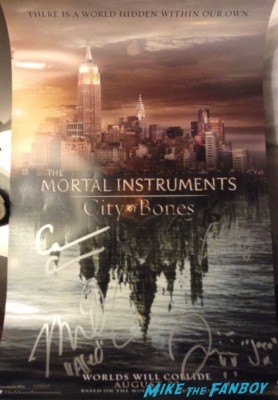