I know there’s been a lot of talk lately about Walt Disney and Pixar’s Brave hitting theatre’s this Friday. Well, our own The Novel Strumpet was invited to a special screening to check out the film and entered the world of… BRAVE… Was that dramatic enough, cause I was going for a lot of drama there and I’m not sure if it translated to the written word… hmmmm…

So I got to see the latest Disney/Pixar collaboration “Brave” and the 2 things that immediately spring to mind: 1) I’m so happy Disney is in therapy and dealing with its mother issues and 2) My mom should write a letter to Disney/Pixar thanking them for not releasing this film when I was a little girl. Seriously, I went through a whole phase where I wanted red, curly hair, loved all things Celtic (Scots or Irish) and wanted to learn how to us a bow and arrow/sword/etc. If you haven’t figured out by now this movie focuses a lot on the mother/daughter dynamic.

*WARNING….I’M GOING TO TRY REALLY HARD NOT TO GIVE ANYTHING AWAY, BUT I CAN’T MAKE PROMISES….YOU HAVE BEEN WARNED*

This movie was not at all what I expected. I was waiting for an evil villain, a horrid curse, a terrible fight and a prince’s true love to conquer all. What I got was a movie about how we can’t see past our own pride at times and the damage that careless words/actions can cause to those we love. A movie about the bonds between mothers and daughters and how the elemental struggle to not “become” our mothers can overshadow all the amazing things about them that we should strive to be like. A movie that has everything to do with love conquering all but no prince or knight in shining armor saving the day. Plus a lot more. I got the type of movie I would’ve loved to have had as a little girl. 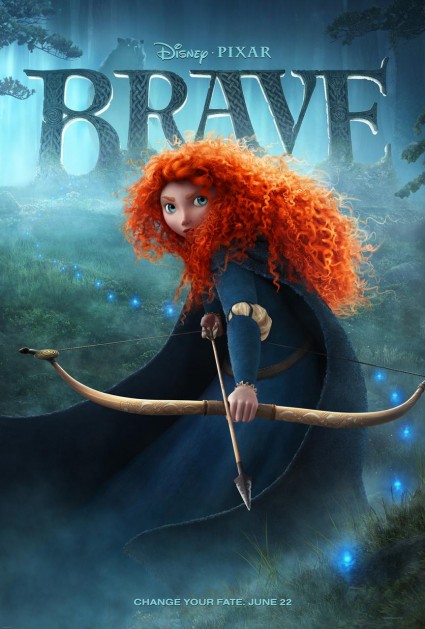 Then there’s the look of the film itself. I want to live in the world of Brave. Mostly I just want Merida’s hair. I mean I’m seriously considering getting a weave…it’s so fricking awesome. The colors, the ‘scenery’, the music (outside of the song because I’ll admit that was a little bit of a let down), the characters…I can’t think of one thing I’d change. Ok, that’s a lie. I’d get rid of the scene where she climbs this rocky point to drink from a waterfall, but that’s because I hate heights and it freaked me out. It’s funny, sad, poignant, goofy, beautiful, scary and just a great story.

I admit that while I’ve liked Disney/Pixar collaborations in the past this is the first film that I want to see again and ultimately want to own. I’ll even be woman enough to admit I cried and I don’t generally cry during animated films anymore. And I just wanted to squish those 3 little bear cubs and catch a will o’wisp of my very own. And ultimately get a weave so I can have red flowing curls.

After the film we were invited to head across the street to Hollywoood and Highland to play some Highlander Games like the ones the princes do in the movie to try and win Merida’s hand. 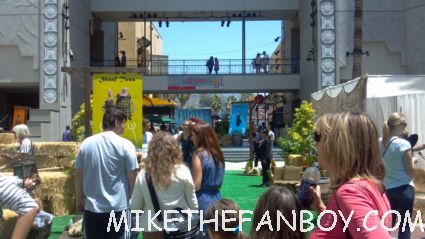 Danger of dangers they had someone there playing the bagpipes, or as I like to call them – my mating call. I LOVE BAGPIPES!!!! And along with them a group of dancers: 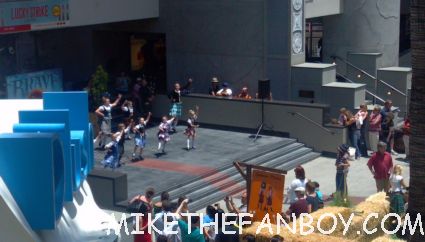 Among the games was Sheaf Tossing, Hammer Throws, Log Throws and Archery. I dragged my friend Jen to the Archery but after 45 minutes in line and hardly any movement we called that a wash, so we did the sheaf toss instead: 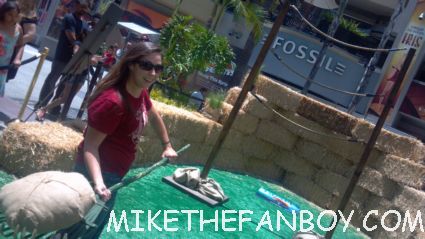 Didn’t win, neither did Jen and guess what the prize was? A Merida wig…NOOOOOOO!

So I highly recommend this movie especially any mothers/daughters out there but take a tissue.