Legendary Academy Award winning director Steven Spielberg has directed one of the best pictures of last year, the criticly acclaimed adventure film War Horse! And now it’s out on DVD April 3, 2012! So… Like now people! As in go to the stores and grab a copy… Or try to win one here on MTF!

This Academy Award®-nominated epic adventure tells the story of the extraordinary journey of courage and friendship as seen through the eyes of one unforgettable horse named Joey, and his miraculous journey to find his way back home.

Bonus features include a special 60 minute documentary (named “A Filmmaking Journey”), created by Spielberg, that offers a never-before-seen inside look into the making of WAR HORSE and much, much more!

We have one copy of the four disc Blu-Ray to give out… Yep four discs people! The specs are below! But first…

I know you want to win… All you have to do is this… Let me know what your favorite movie animal has been and why! A brief description is cool… Nothing too extreme! 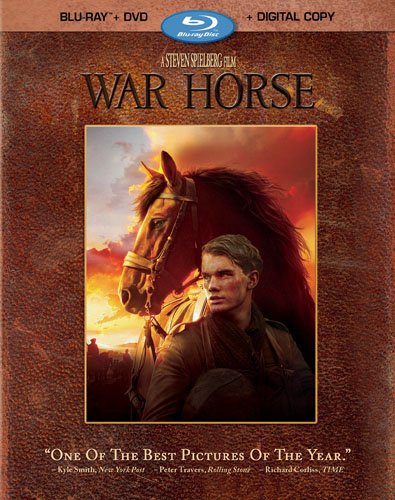 • A Filmmaking Journey – Academy Award®-winning Director/Producer Steven Spielberg provides a unique and unprecedented look into the making and filming of “War Horse.”

• Editing & Scoring – Multi-Oscar® winners Michael Kahn (film editor) and John Williams (composer) discuss specific aspects of editing the film and composing music for “War Horse,” as well as the secret to their long and successful collaborations with Steven Spielberg.

• Through The Producer’s Lens – Producer Kathleen Kennedy shares the photos she took during filming and recounts how she discovered the source material, as well as her appreciation of Steven Spielberg’s vision, the team that sounds him, and why “War Horse” appealed to her.

• “War Horse”: The Look – Director/Producer Steven Spielberg introduces us to his creative team of production designer Rick Carter, costume designer Joanna Johnston and director of photography JanuszKaminski, who discuss what it took to design the look for the film.

• An Extra’s Point of View – Film extra Martin Dew explains how and why he was brought in––along with a hundred other men––to be featured alternately as both German and British soldiers.