It’s MTF contest time! And today we have a few copies of the Blu Ray combo pack to give out! How awesome is that!

Walt Disney Studios and the legendary Studio Ghibli (“Ponyo” & “Spirited Away”) proudly open the doors to “The Secret World of Arrietty” on Blu-ray™ Combo Pack and DVD, on May 22, 2012. This visually stunning animated masterpiece stars an illustrious voice cast that includes Will Arnett, Amy Poehler, Bridgit Mendler, Moises Arias, David Henrie and the iconic and much beloved Carol Burnett.

Based on the acclaimed children’s book series “The Borrowers,” by Mary Norton, “The Secret World of Arrietty” is an imaginative tale of “little people” living furtively among us, and the unlikely friendship that forms when their hidden world is discovered. The heartwarming family adventure features beautiful, stylized animation and timeless themes of friendship, courage and determination.

In addition to the stunning Blu-ray hi-definition picture and digital sound, the 2-Disc Combo Pack includes an array of bonus features that will fascinate animation fans, including a storyboard version of the film and the original Japanese trailers and TV commercials. Additional features include music videos for the songs “Summertime” performed by Disney Channel star Bridgit Mendler, who is the speaking voice of Arrietty; and the movie’s theme song “Arrietty’s Song” performed by French singer/songwriter Cécile Corbel.

So.. I know you want to win and here’s what you have to do!

Just let me know what is your favorite Disney movie and why. Nothing too wordy, just brief! 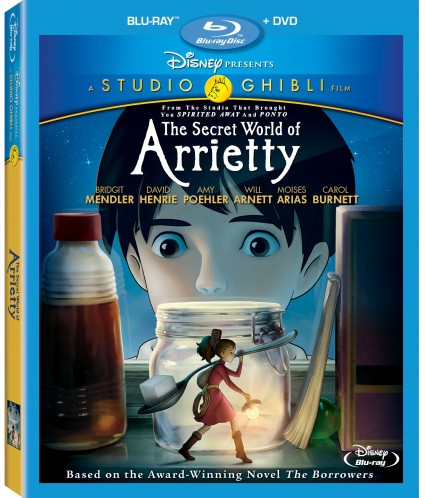