Like I had mentioned earlier this week, well I guess it was yesterday, I was fortunate enough to attend a presentation of Baz Luhrmann’s Red Curtain Trilogy live on stage. This of course got me reminiscing about meeting the iconic director. He literally takes his time when making films and even though occasionally you’ll get something like… oh… say… Australia… It’s worth sitting through that to get something like Moulin Rouge…

Also, this is the first time I met Ms. Tracey Ullman! Who I adore!

Also, it’s fun to look back and read my old reaps… it’s fun for me at least. Lol… I was so new to the LA collecting scene at the time it seems like a million years ago!

It’s a Friday night, and am I out on the town? Nope, I’m waiting in an alley to see if I can get Reese Witherspoon and Baz Luhrmann to walk over and sign my DVD. Well, I have a poster for Reese to sign but still. Both of them and Ms. Tracey Ullman are taping a television program in Hollywood today, and so I and about 20 other autograph seekers are in a cold dark alley hoping to get their attention.

5:00 p.m. – I just got here and already there are about 15 people waiting in front of me… Damn, I thought I would be early. I hope Reese will sign, but really I am just here for Mr. Baz Luhrmann. He directed and wrote Moulin Rouge! (one of my favorite films) and also Romeo and Juliet, Strictly Ballroom, and the upcoming Australia.

5:22 p.m. – I was just told people start to arrive around 6:45 or so. This is only my third attempt at trying to get people here, so we shall see how it works out. I tried for Ryan Phillippe here last year, and that didn’t happen so I never tried again, until this week.

5:44 p.m. – There are about 5 or 6 more people here now, and I think Reese is pretaping her appearance. They are also shooting an episode of Monk just around the corner I’m told.

6:10 p.m. – I have a one sheet of Moulin Rouge! Signed by Nicole Kidman and Ewan McGregor but it’s mounted and framed so I didn’t bring it. I’m not sure how Mr. Luhrmann is about autographs and since he makes a movie about once every 7 years he’s not exactly out and about. I brought the DVD of Moulin Rouge! Instead.

6:22 p.m. – I brought my Election mini poster that I got Alexander Payne to sign for me for Reese but I hear she’s kind of difficult. I actually already have her on my Legally Blonde DVD so it’s alright.

6:45 p.m. – Oh, there’s Reese’s car.. a big white van pulled up in front of her car so no one can really see her. Everyone is chanting now… She’s running inside the theatre and there is no way in hell she is signing anything right now. Sigh…

7:10 p.m. – Baz and Tracey just walked in together and neither one of them stopped to sign anything. Double sigh…

7:15 p.m. – Reese is leaving. Everyone calls out to her, but she doesn’t stop. Oh no, that girl is on a mission and her mission is to get in her car. LOL… Some of the guys start chasing the car, but she doesn’t care. She is gone people!

7:22 p.m. – I’m about to head out, but I just talked to my friend Scott who convinces me to stay and try to get them as they come out. He said traffic is really bad anyway… So, I decide to wait.

7:26 p.m. – A man running faster than I could ever possibly hope to run is coming down the alley. I’m moving out of his way, but it’s fascinating…Like watching a lava lamp, hypnotic, but you don’t really know why.

7:27 p.m. – He’s right next to us now, still running and just yelled out, “He stole something call the cops.” Who stole something? How can we call the cops when we have no idea what he’s talking about. He just said the same thing to a guy taking a cigarette break on the other end of the alley. Yep, he made it all the way down the alley in like 30 seconds. I’m impressed.

7:29 p.m. – The cops are here. Yep, the guy stole something. LOL… What we could surmise is that Monk was filming and the guy took something from the crew. The poor guy just kept on running. He should have been filmed for a Duracell commercial! “He keeps going and going…”

7:49 p.m. – Oh, Baz Luhrmann just walked out. He’s walking the other way… Shit. One of the guys is yelling out for him, and he stopped! A bunch of us run over, he signs my DVD first and I ask him to make it out to Mike. 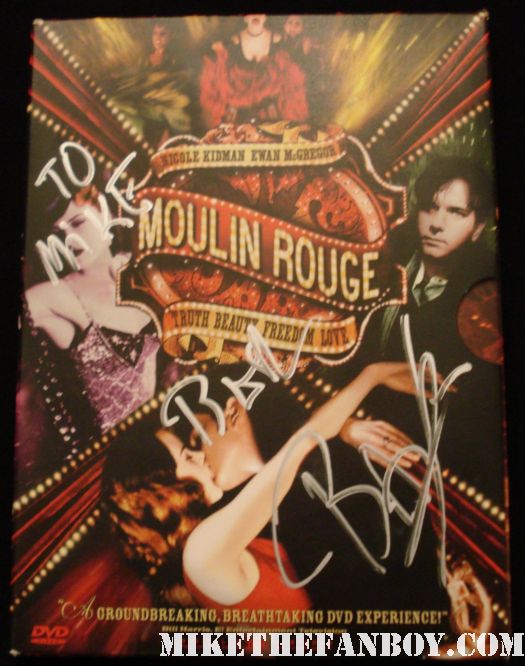 I then ask if I can get a picture. A little kid runs up to him, and asks him to sign a piece of paper. He says sure, “But then I have to take a picture with Mike.” I thought that was funny. 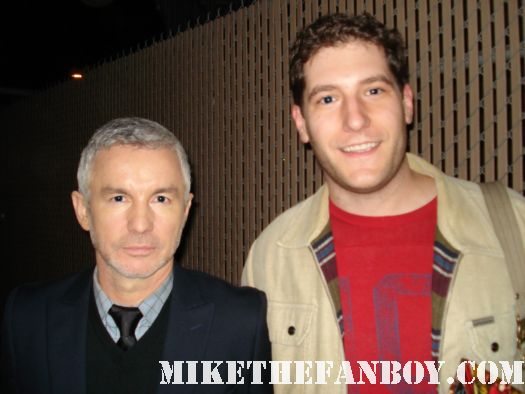 7:54 p.m. – He signs a bunch of things for people and takes pictures as well. I should have brought the poster… grr… Well, now I know for next time. 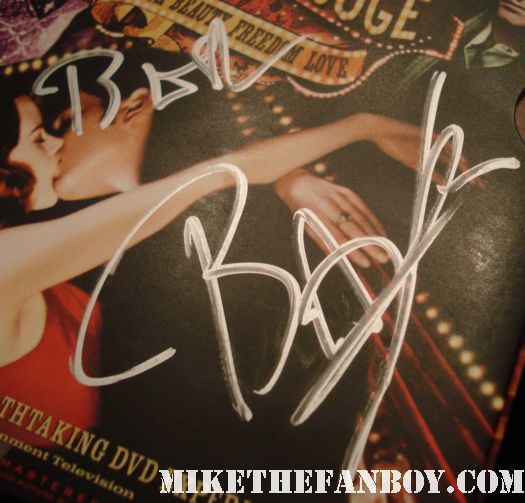 8:10 p.m. – Tracey Ullman just walked out. She’s walking the other way too! Everyone calls out to her and she stops too. 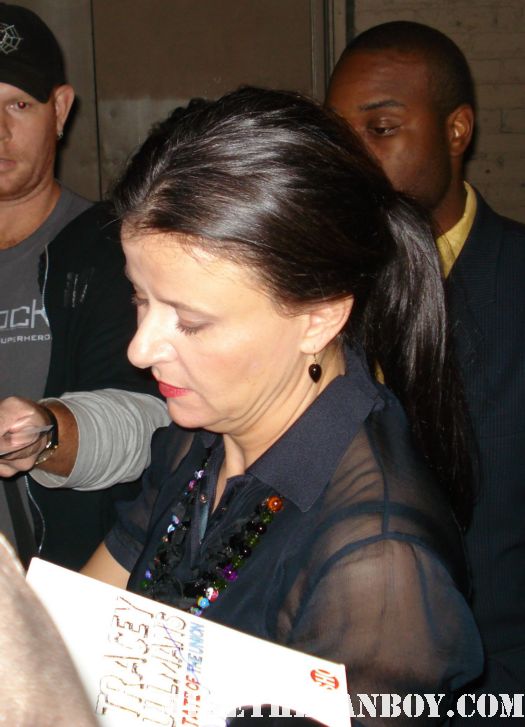 She signs a ton of things. I got my DVD signed and I also got a picture with her as well. Very cool. 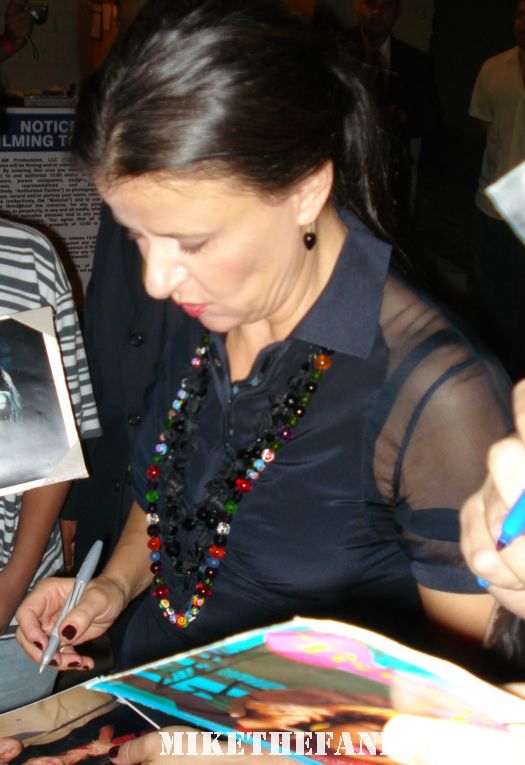 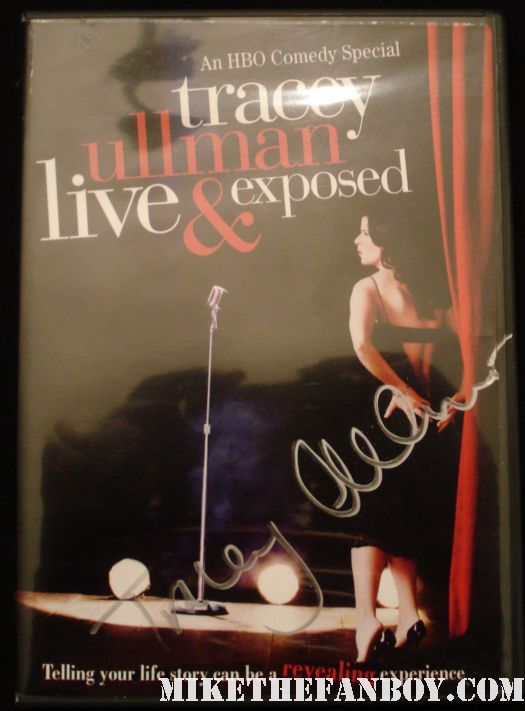 Well, even though Reese did not stop, I still got the person I wanted to get. Directors, at least to me, are the most important part of a movie. It’s their vision and basically the whole picture is on their shoulders. A good director can make bad actors and a bad script good. A bad director…Well, we’ve all seen the Star Ware prequels… Anyway, Baz was such a nice guy, and Tracey is super sweet. Overall a great night! Even if I did spend my Friday night in an alley! 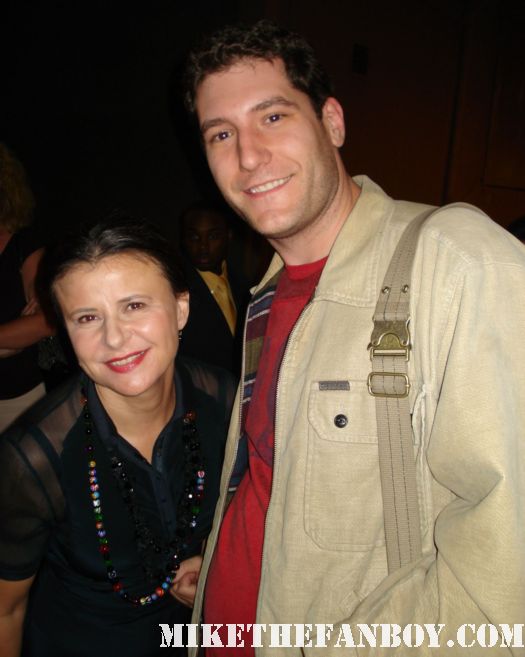