So, when Suddenly Susan wrote in about her first ever movie premiere, it got me to thinking… When was my first “official” movie premeire? And I thought… Wow, what a great MTF Flashback! My how things have changed. Now, getting to a premiere at the crack of dawn seems to be the norm! Back only what? Four years ago there was only two people there, and that was only because we didn’t know better! LOL…

The times they are a changin! Now you have to get anywhere at the butt of dawn… I was going to say butt crack but I thought butt of dawn was more accurate. In fact, I’m so thankful for my friends who get there early and help us 9 to 5 er’s out! Thanks again guys!

The Lovely Erica and I teamed up on this premiere and it was for the DVD release of Kung Foo Panda. Not a bad way to christen your first premiere, with Angelina Jolie! LOL…

Check out the full flashback after the jump!

This is monumental day, not only am I getting up at the crack of dawn (something I hate doing) but it is my first “official” movie premiere. This event is for the DVD release of Kung Foo Panda, and the straight to DVD companion disc. Angelina Jolie, Jack Black, Dustin Hoffman and Brad Pitt are all supposed to be here. Someone also said Lucy Liu and some others, but I am not sure. I told Erica, my partner in crime, that we better get here early, so we both decided to meet up on Hollywood Blvd at 7:00 a.m. so we can get a good spot to get some signatures. Mornings are not my friend, so this is quite a sacrafice for me, but for Ms. Jolie, it’s worth it!

6:55 a.m. – My cell rings. It’s Erica. She just got to Hollywood and I am still home. Sigh… We are supposed to meet at 7:00 and I am, of course, running late. She said she is all alone and there are only two press people there. 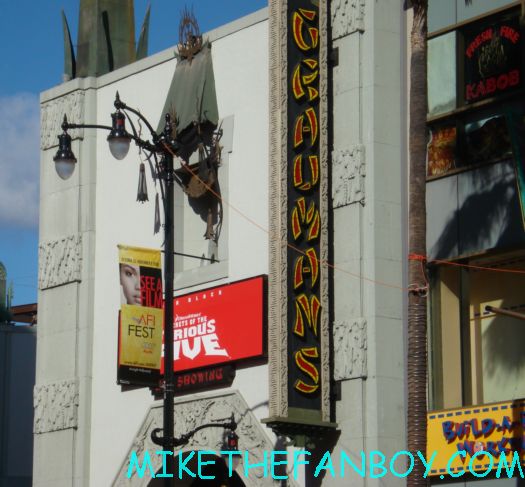 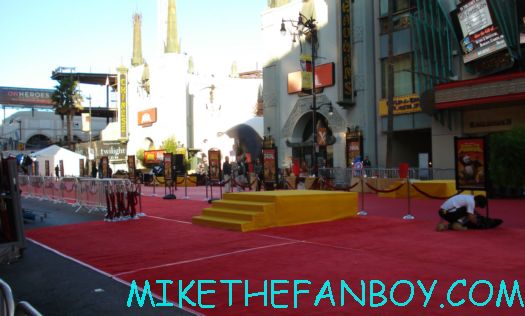 7:35 a.m. – I just spotted Erica… She’s alone standing by the curb next to a long red carpet, so it wasn’t that hard. LOL… We got a prime spot just at the front of the carpet. We have a prime prime spot a cause there IS NO ONE ELSE HERE! 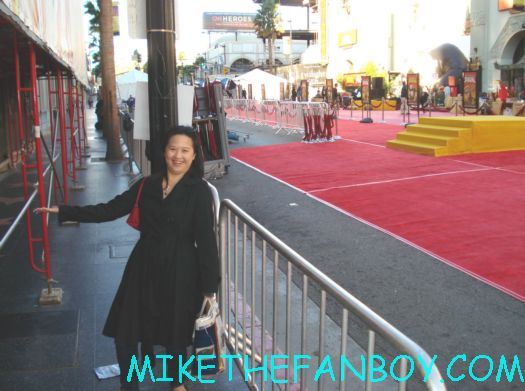 7:45 a.m – I’m trying to figure out where we should stand… cause if we stand farther down towards the front it might be better. I’m obcessing as Erica would say. Wait, she did say it. 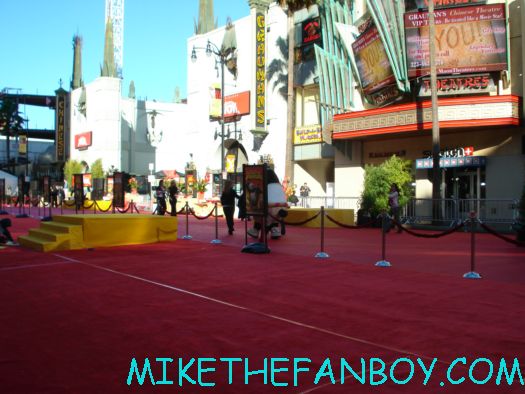 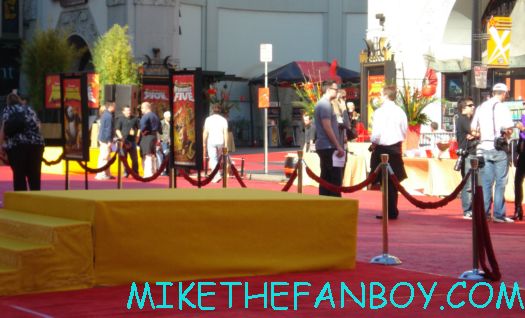 9:03 a.m. – The poor plants are blowing in the breeze… I think that they are going to topple over!

9:30 a.m. – Panda’s are coming out! Giant pandas… Well, people dressed as giant pandas. LOL… Oh… A man just walked in front of us with only panda arms. The panda was pulled apart at the seams! 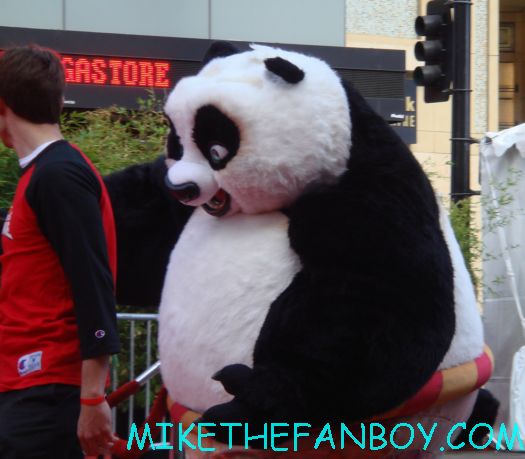 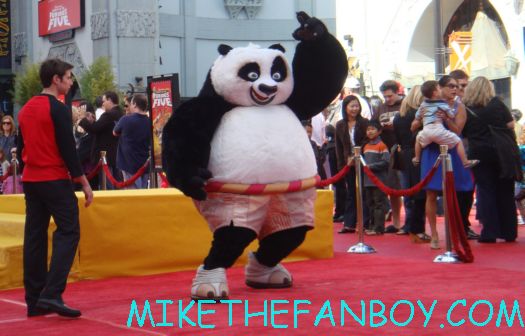 10:34 a.m. – A lot of people are filing in on the other end of the line. Erica tells me I’m paranoid…Cause I keep asking her if we should move down.

10:45 a.m. – I am now annoying Erica, by repeating. “This is Hollywood, everyone’s got a dream, what’s your dream!” over and over again. Ah, “Pretty Woman” a timeless classic.

11:00 a.m. – People are starting to arrive now. The street is closed which is nice, and there is a long red carpet. This is for the DVD release of Kung Foo Panda 2 or the Kung Foo Furious 5 or something like that. Micheal Eisner just pulled up. 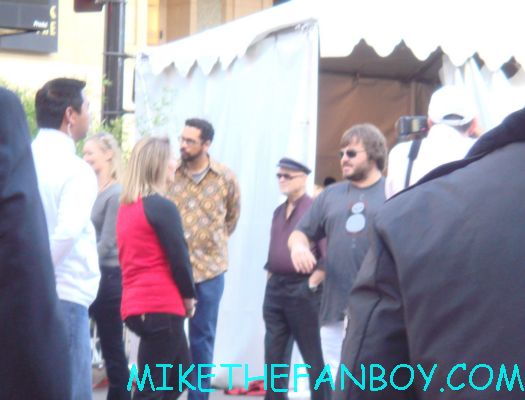 He is starting to sign at the other end… Dammit. Ahem… Paranoid! 😉 He makes his way to the end of the carpet just about 11 people down from us and stopped signing. I think we’re going to miss him, because he is telling people he has to go. Erica and I are still holding out our Nacho Libre posters even though Erica has never seen the movie. LOL… 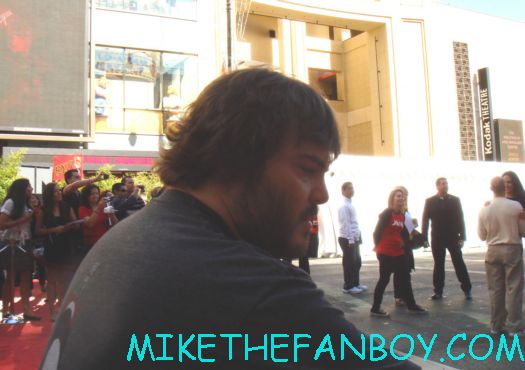 YAY, Erica and I got our posters signed! Whoo Hoo! 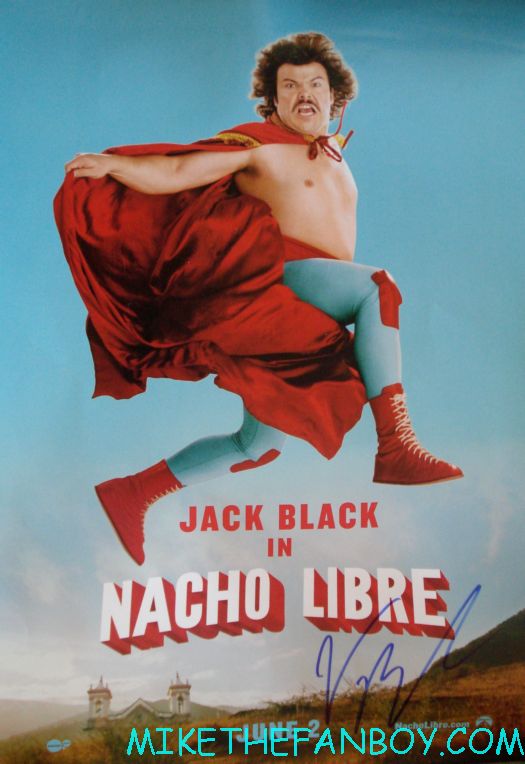 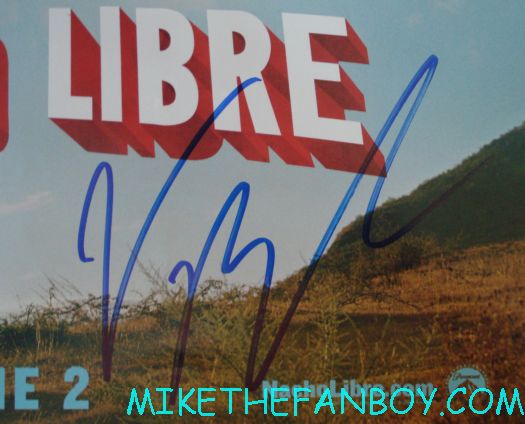 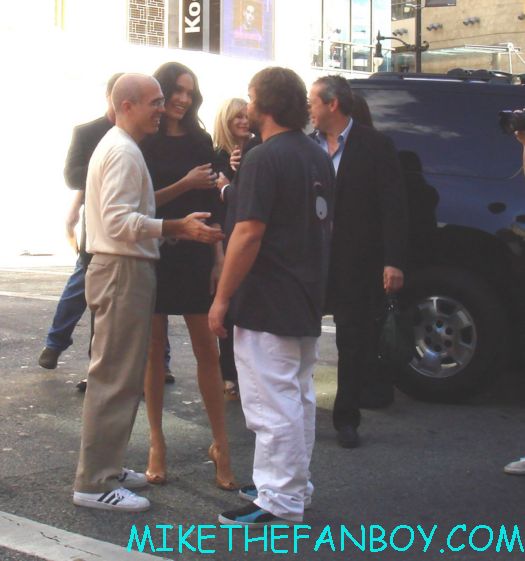 Brad isn’t here. She is smiling with Jack and taking pics with the large panda’s that are milling about. 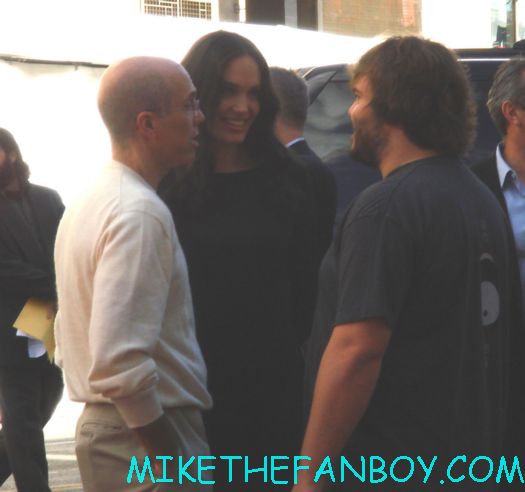 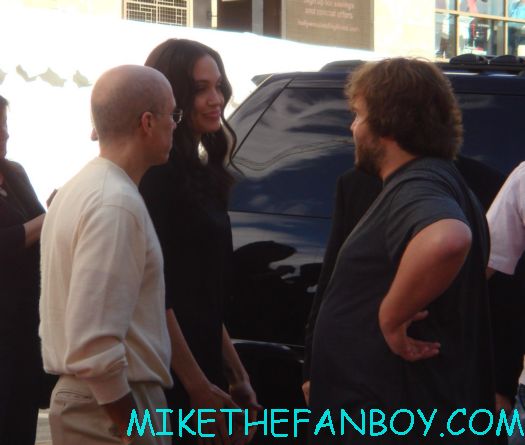 She starts towards the line, and goes… to the other end… where I wanted to be… 😉 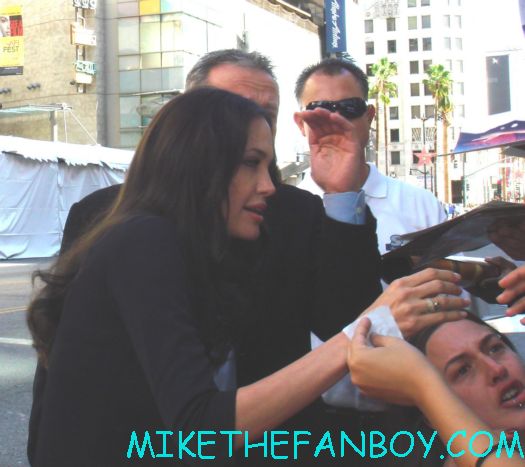 11:23 a.m. – Angelina is one of the best signers around, she is making her way down the line and spending lots of time with the crowd. Oh, she’s coming this way… 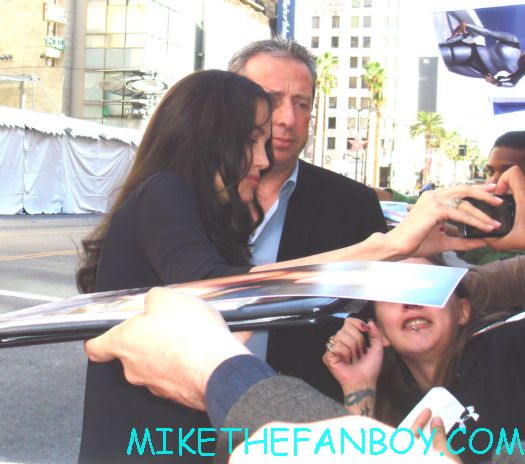 Poor Erica didn’t get her though. Aw, she passed Erica by. Erica is kinda short (sorry Erica, but you are! 🙂 and I think she got lost in the shuffle a little bit. 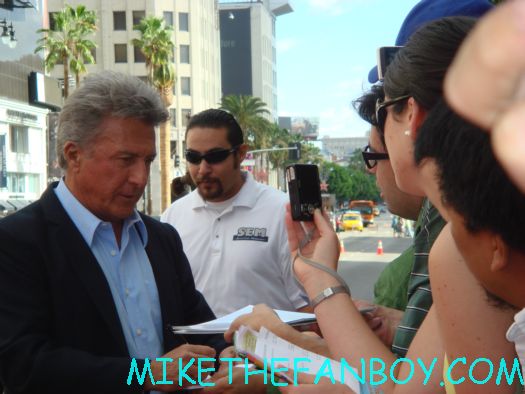 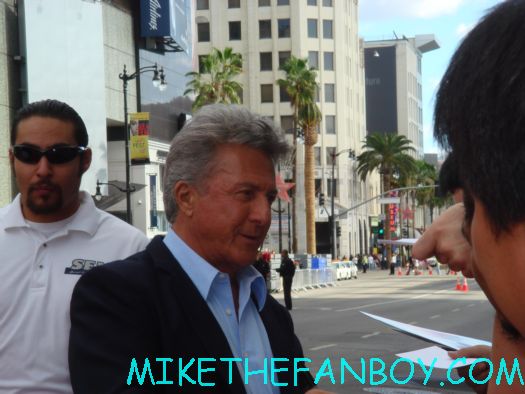 He signed one thing each, and even took a pic with Erica (she didn’t have anything for him to sign because she met him the night before at the AFI fest. For Erica this is a Dustin Hoffman weekend). 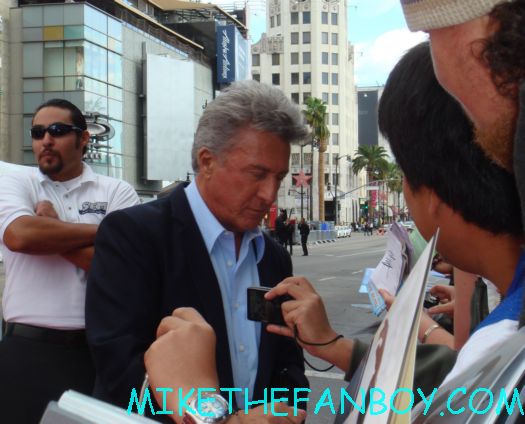 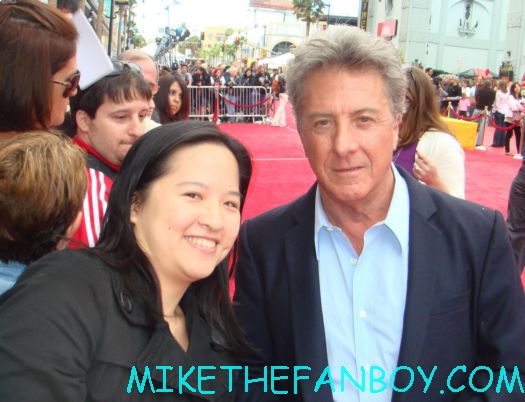 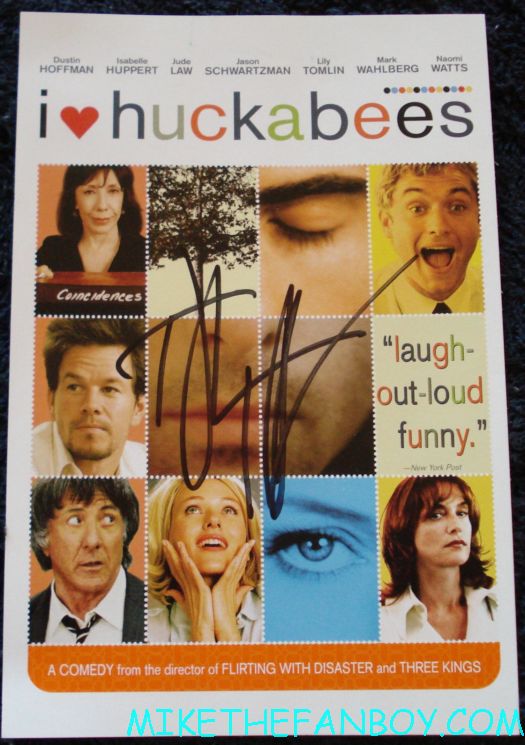 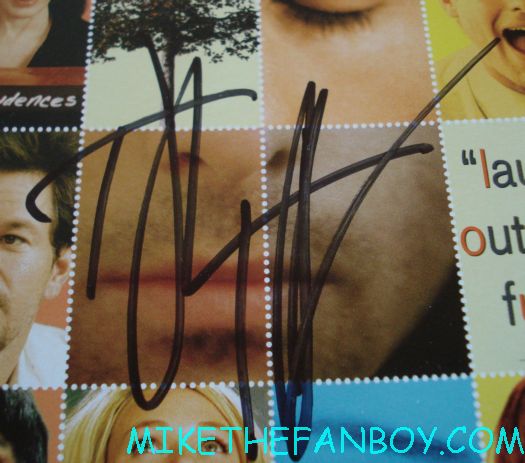 This really was a fun afternoon. Even though we now realize we don’t have to get here at the absolute crack of dawn, both Erica and I had a good experience. It was fun to watch the large pandas, and I …. Got… TO… MEET ANGELINA JOLIE! 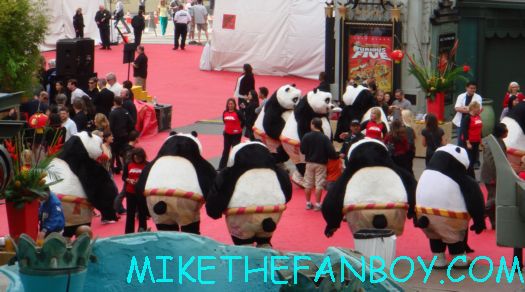 I have loved her forever, so this was such a treat! I do feel bad for Erica though since she didn’t get her, but not that bad because she got Anne Hathaway later on that night. 🙂 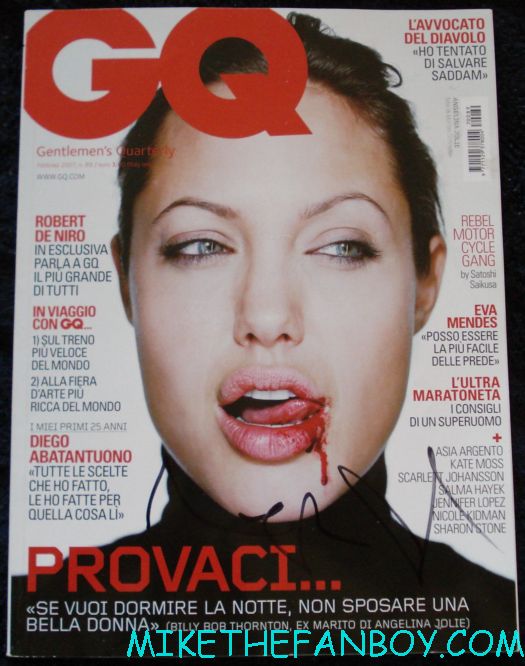 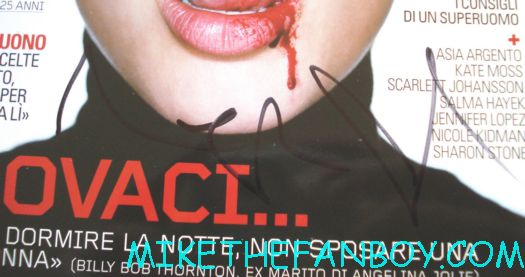