Man, I’ll tell you… Reading this latest report from Billy Beer… It makes me want to try and visit some more sets. I just love it when you get to meet some of the stars of your favorite show, dressed as the characters you love and the actors are super nice!

Billy headed out to the set of Parks and Recreation the other night…. Election night actually and was able to meet a couple cast members. Plus, this is probably one of the best photos I’ve ever seen taken with a celebrity! LOL… It’s awesome! 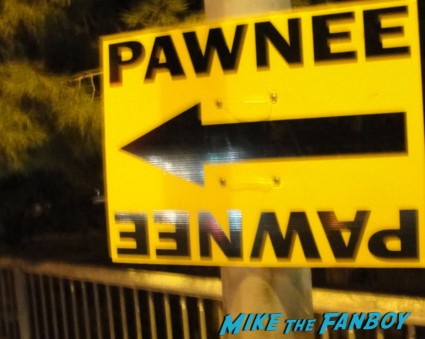 Yup, only one of my favorite shows on TV, Parks and Recreation, with a number of cast members I absolutely LOVE! I’ve been working on a cast piece now for over a year. So far I have Amy, Aubrey, and Aziz. I know it’s not a lot, it’s just whenever I see these people, I never have my cast photo on me. So today I come prepared with my cast piece and a camera to take some great pictures.

C.B. and I meet up at the base camp. There’s a bunch of Star Waggons set up, so we know we’re in the right spot, we just don’t know who’s on set today. We sit around for a little bit, and finally see our first cast member. Aubrey Plaza! I don’t need her on my cast picture, but I just love this girl. I’ve never done any taping Fanboying, so I’m not sure what to do here. C.B. tells me to just wait, which is what we do. Next we see someone that looks like Rashida Jones. Not sure, but we’ll keep waiting. Next out of the Waggon brigade is Chris Pratt. I’ve heard how nice he is, but we still wait. It looks like Aubrey and Chris are getting in a van to go to set. We sit around waiting for them to come back, when we notice they’re starting to close down camp. Shoot! Did we miss our opportunity??? We then drive down to where we think they are taping. There’s nothing there. CRAP! I decide to go back to the home base while C.B. goes to get his car. Then I get a call back for C.B. “I found out where they’re taping” Music to my ears!

When I get there, it’s a court house they’re taping at: 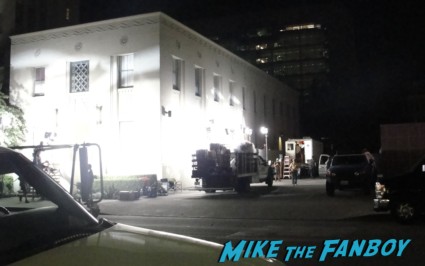 We wait a for a little bit (a lot of waiting on sets!) and finally see Chris and Aubrey coming out of the bus. C.B. calls to Chris, and he tells us he’ll do it after. MONTAGE

It looks like they’re done taping in one of the areas. I hear someone yell “one more to go”. We now see Aubrey leaving. Oh, during the MONTAGE, I remembered I had a poster from an event she did 2 years ago. Don’t ask. We call to Aubrey, and she waves us over. I showed her the poster and she was surprised I had it, pointing out the fact that it was over 2 years ago she did the benefit. We then ask if we can get some pictures with her. She says sure, and I ask if she would take a funny one with me. Now last time I asked for a funny picture with a parks and rec person, I was the only one that looked funny. 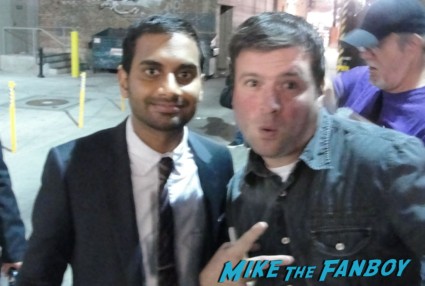 So this time I had to give directions. “Can you be all serious in the picture?”

Aubrey Says, “So you want an April picture?” (her character’s name)

Yes please! And she didn’t disappoint! 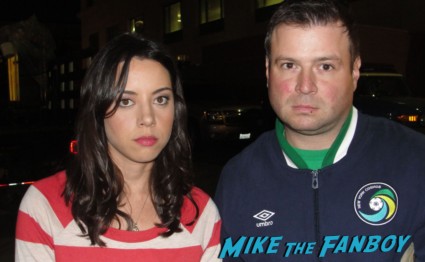 Then she asked C.B. if he had any requests, and did spirit fingers for him even though he just said normal. LMAO! We thank her and then wait for Chris. A guy comes over to us and tells us there’s one more scene and it’ll take about an hour.

Finally we see Chris coming out. What was crazy is, he spotted us, and played his own version of Frogger to get to us. He could not have been any nicer!!! I read a story about how he got his first big gig while being a waiter at Bubba Gump Shrimp in Maui. He was waiting on Rae Dawn Chong and had her laughing so much, she casted him in a movie. Well, he had us busting up the whole time we were talking with him. C.B. asked him to draw a self portrait of himself, which he gladly did. We asked if his band was going to be playing anytime soon and he said in a few episodes. He seemed really excited that we waited for him and that we actually knew a lot about the show. After he’s done drawing, he even waited around for me to fix my stupid camera to takes pictures with us. 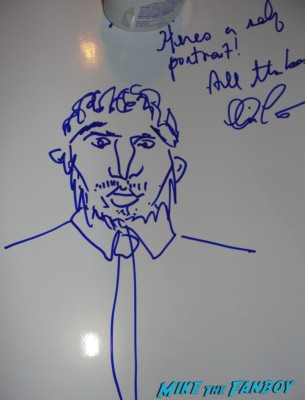 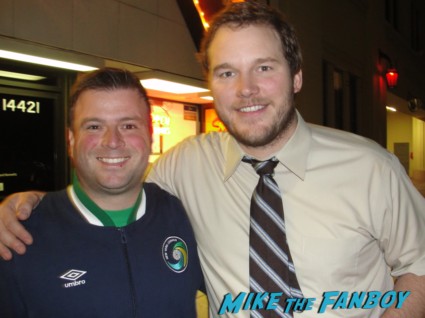 WHY WHY WHY can’t every celebrity be so nice.

K-Stew, that comment is directed to you! And yes Bella, I’m keeping this cast photo also!

Anyway, Let’s just say, I had a great day. It’s not always the size of the star, it’s how they treat you that make them even bigger stars in my mind! Alright, time to go. It’s Happy Hour Somewhere!