Home / Awesome Anushika • Interviews / Talking With The Strain’s Natalie Brown! Working With Prosthetics! Doing Stunts! What’s Happening With Her And Zach? And More!

If you have no idea about The Strain, stop reading right now. Do yourself a favor and go watch it. If you know me, it’s my new addiction. I absolutely love this show and I had the pleasure of talking to Natalie Brown who plays one of the scariest characters in the series, Kelly Goodweather. I know, doesn’t sound so scary right? That’s exactly why you have to watch the show. Natalie does an amazing job portraying the ever changing character; I mean literally her character changes throughout the series. Kelly Goodweather goes through one transformation after another. She has been taking the backseat for a while; however, we are finally getting to see her having a stronger presence in the show and it keeps growing. Love it! She is such an important character that could definitely change the direction of the series. We picked Natalie’s brain about the new season, her experience as a Strigoi, and what to expect next.

If you are following the show you know the first question that pops into your head is the incredible makeup and prosthetics. It’s insane how much they transform these character and especially Kelly who goes through several transformations. They might look amazing, but how is it to be the under all that silicon?

Natalie explained how the whole process took 4 ½ hours to complete. Not a huge shock when you see all the fine details and how expressive they make these creatures. She kept herself busy chatting, unlike Rupert Penry Jones who plays the awesome hybrid Quinlan treats the process as a time to go into a meditative state. Even though it sounds tedious, Natalie absolutely enjoyed the experience and so grateful for the entire team. She claimed it made her job so much easier since she already looks so terrifying walking into set. Keep an eye out on Twitter, she might post a time lapse video of the process.

What was Natalie’s reaction to seeing herself for the first time in the mirror?

She was “simultaneously thrilled and terrified”. I think that sums it up just right. Even though it was an insane experience, it didn’t seem to be a total shock since her character changed gradually through the course of the show. First turning into a Strigoi, and then coming out of that primitive mode. 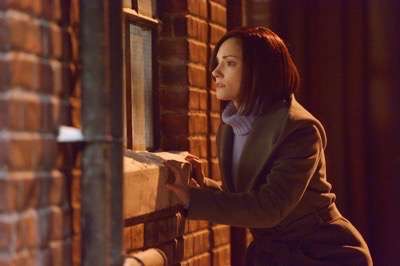 This led to our next question. How does she get into character? Kelly’s character developed quite a bit throughout the series. So how challenging was it for her to keep altering her behavior accordingly?

Since the makeup was so extreme, it was easier for her to get into the state of mind. Natalie’s challenge lied in her movements during the transitions. You are always fighting against your natural human tendencies, especially when she had to act being a human in Season 2. It’s so easy to slip into one’s natural maneuvers. Throughout the seasons, it was “a process of adding and eliminating. Choosing what to keep and toss”. The vampire choreographers and the directors kept her on track. Natalie had great support and direction to generate the perfect execution.

How about a favorite episode?

Natalie described how “Kelly keeps growing with complexity”. During Season 1, her favorite scene was “the first time when Kelly turned someone”. It was definitely an interesting episode. Season 2, she really enjoyed last week’s episode where she got to do the makeup scene with Eichorst played by the amazing Richard Sammel. Great to hear that we weren’t the only ones who enjoyed that clip last week. 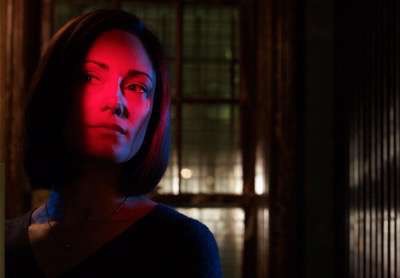 When you talk about Kelly Goodweather, you cannot forget about the creepy feelers. Who are they and how do they manage to do the things they do?

Apparently, they aren’t just normal kids. They hired “gifted dancers and acrobats”. Natalie said most of them were girls. She went on to say that they were so talented and “just a joy to work with. They did Kelly’s dirty work”. It seems like they had a lot of fun, plus they were her “favorite thing in the book”. The crazy moves were enhanced by visual effects and trampolines were used to give their jumps an extra lift.

Did we see the end of the creepy feelers? Will we see more of them?

“Might have a couple lingering” Not sure if I’m too happy about that answer. They give me chills. It was a big bus after all, so I won’t be surprised to see a few pop out later on. 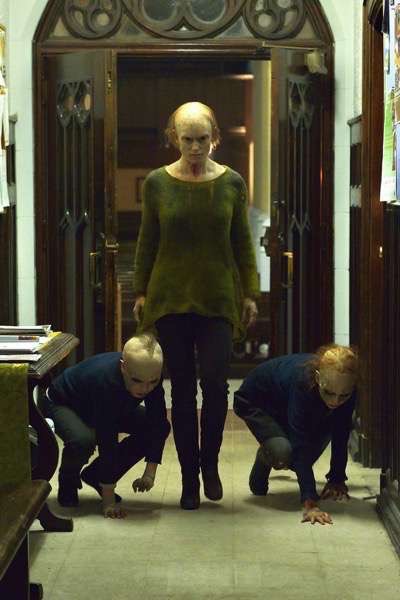 The show is pretty intense. How do you deal with the darkness?

Things really get dark after Kelly gets turned into a Strigoi. Natalie explained how Kelly has the “burning desire to connect with the dear ones. It changed, but it’s still there very much alive. They feel like they still have purpose.” The Master granted Kelly the special gift of all her memories and thoughts. She is blessed and fortunate to have the echo of her old self. Ultimately, Kelly is “very much driven by her desire and need”. The creep factor is totally growing with each episode.

Kelly and Eichorst Bond, how will that progress? Not going to lie, we all want to see more of them together.

Natalie was more than excited about Kelly getting the golden ticket to go into Eichorst’s dressing room and have a makeup session with him. “Eichorst putting on his face was a highlight” last season. She was thrilled to get a chance to hang out with Eichorst. Maybe “borrow some concealer”. Needless to say he was her favorite character from last season. Natalie went on to say she “couldn’t have asked for a better mentor”. The new “Bonny and Clyde”. I’m sure this won’t be the last time we’ll see them together. Definitely looking forward to their growing relationship.

Is Kelly’s human nature coming more forward with the recent transformation? Will her desire to protect Zach come in between her and The Master?

Natalie claims, “The emotional pallet is running deeper. With access to the memory, she definitely has the feel to connect. There’s possibility for more connection and confusion. But the master has the control. She still ultimately wants to protect Zach”. 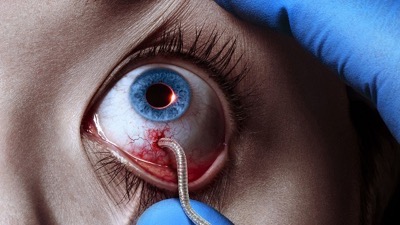 Does she want to hang out with Zach or turn him in to a Strigoi?

It may seem like a malicious hunt; nonetheless, the definitive goal is “to protect, not hurt”. Natalie clarified the whole need to turn others is to have more companions around and to protect them. It might not seem so clear, but when you think about it, that’s how they reproduce. The survival of a species is defined by their success to reproduce. Yup, the vicious cycle.

What did you expect when you joined the show? Did you know that was coming?

Natalie was surprised and really didn’t know how it was going to progress just like the rest of us. She is learning as it goes. Honestly, she didn’t even expect her character to be still alive. The whole experience totally “exceeded her expectation”. She said, “This season take a much darker turn”. The amazing writers certainly “do the role justice”.

Kelly attempts to turn Zach against his dad last week. Is Kelly’s anger towards Ephraim caused by the events happened before she turned?

Natalie said Kelly “will take no prisoners. A lot of the circumstances before turned is still there and fueled her anger” towards Eph. “The custody battle never ends”. The Master gave her Kelly’s thoughts and memories, so even though she is physically a different being, she is still able to make the emotional connections. Plus Kelly gets to use them as a tool to carry out The Master’s deeds. 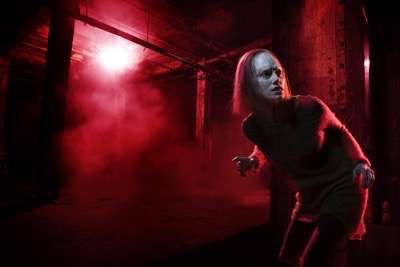 What to expect the rest of the way?

Due to obvious reasons, Natalie couldn’t reveal much, but she mentioned that the stakes getting higher. “The story gets richer and more exciting. Can’t wait for everyone to see how it unfolds. Bigger and better.”

Kelly has a several physically challenging scenes. How do you approach them? Do you do your own stunts?

Natalie is always up for a challenge “as long as it’s safe.” She couldn’t jump off the second story building during one of the scenes, so they brought in the professionals. She attends a bunch of classes to improve her movement to be more physically strong and able. Accompanied by the Feelers, Kelly really gets to do a lot of fun stuff this season. Natalie “really enjoyed getting more physical”. She was willing to do “whatever the episode demands”. 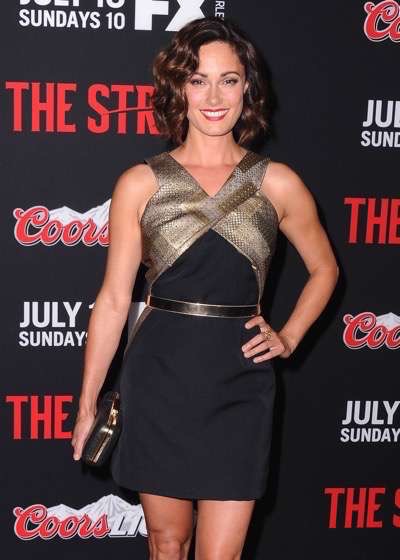 I have to say, she is a tough cookie! The infamous lean mean momma Strigoi. I loved how excited she was during the whole interview. She is pretty active on social media and it felt like we were talking to a friend with a wickedly awesome job. I can’t thank her enough for taking her time to talk to us all and for being such a sweetheart. I can’t wait to see more of her on the show and EXCITED to see what’s in store for us!

Don’t forget, The Strain airs Sunday nights at 10:00 p.m. Eastern and Pacific only on FX. Check it out!