Comic books have become more of our mainstream society than ever before. How many recent movies have been based on characters from Marvel, DC, etc… They are in our television shows, everywhere… They have become part of our culture.

You guys may remember Jim, he had the great wedding photo a while back, and was the one who scored Steve Martin! Jim loves comics and is going to start a weekly comic book column!

So, I’m not going to babble! I’m just going to turn it over to him!

Check out it below and give him a big MTF welcome!

Hello Fanboy Fanatics my name’s Jim and from here on out I’m going to be contributing a weekly article on the fantastic world of comic books. In recent years the comic book characters I’ve grown up reading have gone mainstream and I love every minute of it. I love the idea that the Avengers can be made into a movie and gross a billion dollars, then spin off into one of the most anticipated TV series in years. It’s fantastic and what it means for me is that all that time I’ve spent in the comic book store pouring through long boxes, reading thousands of issues, didn’t rot my brain like my mom said but turned me into some sort of geek historian that’ll bring you a rundown of the best comic books of the week, how they tie into our love of movies & TV and maybe even do some cool interviews from time to time. So let’s get started.

Every Wednesday is new comic book day and it’s my favorite day of the week. I get to go to one of the best comic book stores in the world, Eide’s. Some may say “Everyone says there’s is the best” well let me break it down for you. At Wondercon  when I got to meet Guillermo del Toro I walked up to the table and said hello my names Jim and I’m from Pittsburgh. As soon as I said that he went into a story about Eide’s, asked me if i shop there, then went through the list of obscure things he found while there and how he ranks it as one of the top 5 stores in the world. The next example is in one of Mike’s favorite movies “The Perks of Being a Wallflower”. In the diner scene Emma asks “Do you shop at Eide’s?”. So yeah every Wednesday during lunch I walk over to the best store in the world to pick up my weekly reading material.

This week was fairly light with only 8 books coming out that I read on a monthly basis. Some say that’s a lot because 8 books cost about $25 (don’t tell my wife that) but sometimes there are quite a few more. So out of these 8 books there are a few that might interest those faithful Fanboy followers. 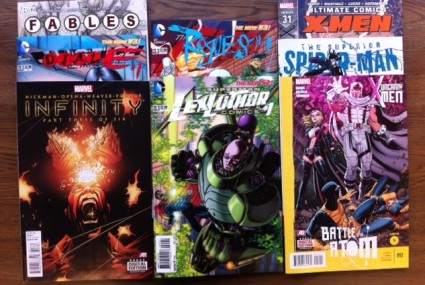 Currently DC is running a Villaincentric month where each of the Hero books is taken over by their sworn enemy. The covers are done in 3D (don’t get me started) and even with the inflated cost and 90’s style cover have been really interesting. The ones i would recommend for this week are Lex Luthor and Reverse Flash. Two very well done books setting up these characters for a possible role in either the next Superman movie or the potential Flash TV series. By altering these characters back story they’re now more in tune with the 21st century. And for those that are in it for the money these books are selling for 4 and 5 times cover price on the internet. Due to the cost DC did low print runs of these books making them a hot book for speculators. 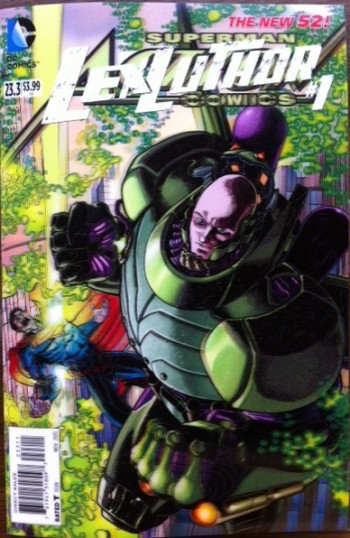 Next up is Infinity, this is Marvels attempt to rewrite characters history and get them geared up for various debuts in future movies. This issue deals more with the Inhumans and if what i’m reading online is true (and it has to be cause it’s online) then Marvel’s gearing up for an Inhuman movie in Phase 3. Making them the Mutants they no longer have the rights to. This will be a fun story to follow in the coming years.

Well that’s it for this week now get out there and buy some comic books already.
Jim