I have to tell you, Jekyll Or Hyde can be so frustrating, I mean you just never know. It’s like water torture sometimes. lol…

Karalee headed out to an event with the entire cast of New Girl, a show we both love and the cast generally speaking is pretty nice. Now, Zooey Deschanel is tricky. I saw that because she can be nice one day and just downright rude the next. It’s fascinating!

Karalee has a great recap of the event and her diss from Zooey Deschanel. Check out her full recap after the jump!

There are times when I say, “Enough is enough! I’m not going to take on any new TV shows!” (I know, way to put a stake in the ground, right?) The thing is, the DVR guilt already hovers around DEFCON 2, so getting hooked on any new shows just seems overwhelming.

And then something like “New Girl” comes along and I remember how dumb I’m being for pretending I don’t love watching TV and immediately allow myself to get hooked and fall in love with the wacky crew in the hip L.A. loft.

It’s one of those shows guaranteed to make me laugh out loud every episode. So when I learned the entire cast was going to attend a recent screening and Q&A, I knew I wanted to try my luck and see if I could meet a few of them.

It didn’t seem like a lot of the usual suspects (i.e. collectors, graphers, etc.) knew about this event, as it wasn’t widely publicized. When I arrive, Billy Beer is already on the scene, deeply embroiled in a game of Candy Crush Saga. He apologizes for being rude — a first for him. 😉

Just when I think the afternoon is going to drag until arrivals, two girls, who clearly will be attending the event, begin shrieking/wailing/annoying because of the imminent venom they narrowly escaped by a deadly…lady bug. Yup, a lady bug. It’s been a few days, but trust me: that image is still highly annoying.

The venue is new to me and Billy and the others, including birthday-boy Ace, aren’t jazzed by the set up. We keep hope alive though and ultimately, we’re asked to move from the center platform in the circle drive to the far sidewalk (just as the group predicted). In orderly fashion — there’s maybe 10 of us — we line up on the sidewalk and wait. The fan line is already wrapped around the building and press row has filled in across the lot from us. Now we just wait for the cast. I have heard for some time about how nice and friendly the three men are, but that Zooey Deschanel and Hannah Simone are a bit tougher to get. That doesn’t mean they’re not friendly, just not as apt to cross over and sign autographs/pose for pictures. I don’t care who comes over — I’m just excited to see them up close!

First to arrive is Lamorne Morris, who plays Winston. He gets out of the car, and our little assembly calls for him. 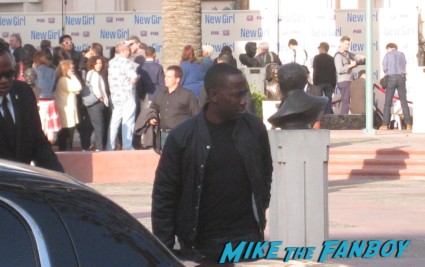 The security guy says something like, “You don’t want to sign, do you?” Lamorne disregards and heads straight over to us. 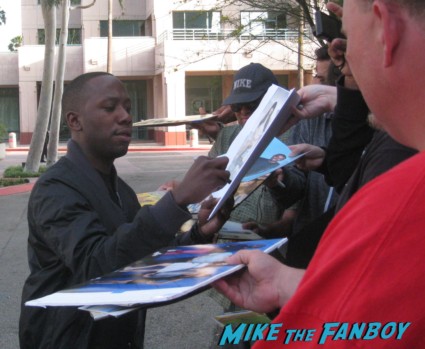 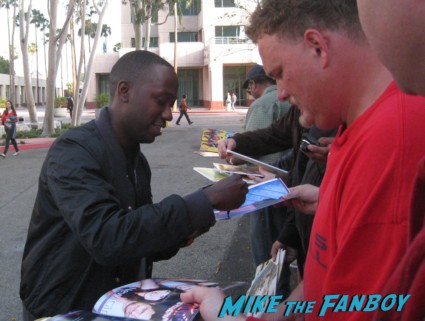 Yeah! He signs for the entire group, whatever each person wants and takes photos as well. He was adorable. 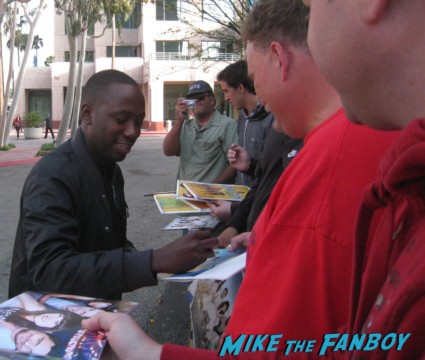 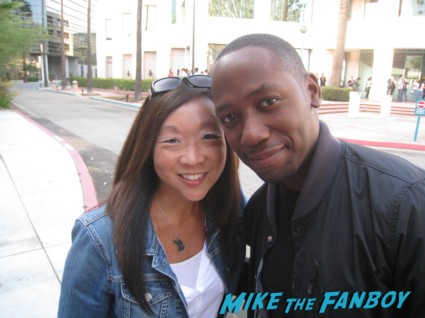 Now I honestly don’t remember if it was Hannah or Jake Johnson who showed up next, but here’s all you need to know: Hannah said she would come over after she did the press row (she didn’t) and Jake came right over to us. 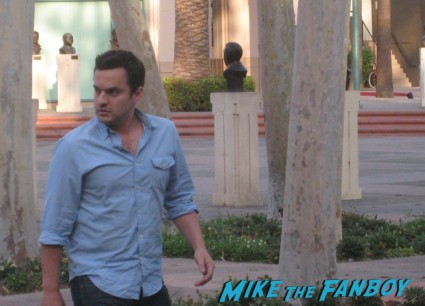 Again: Yeah! And just like Lamorne, he signed whatever people asked him 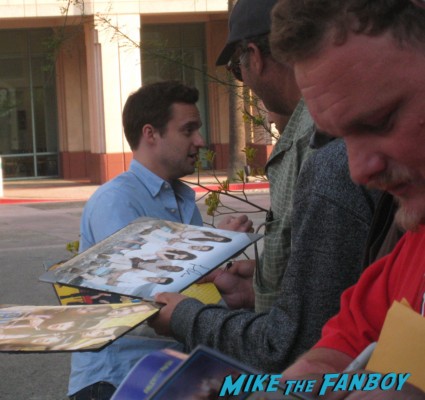 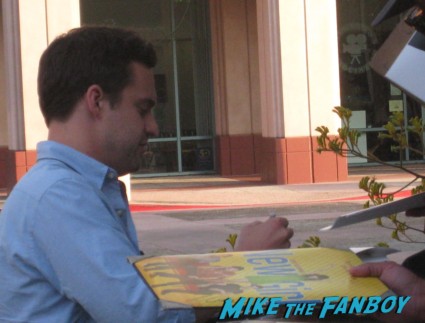 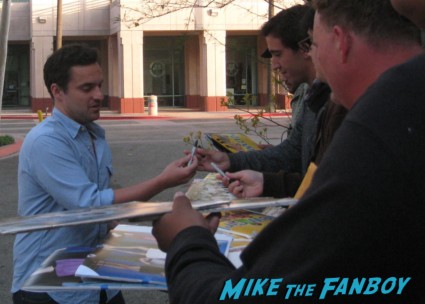 (Billy got two cast pieces finished with his autograph!) and took photos. Such a nice guy. 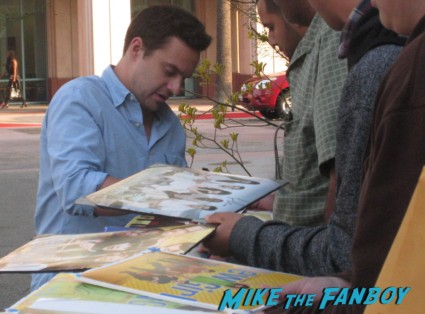 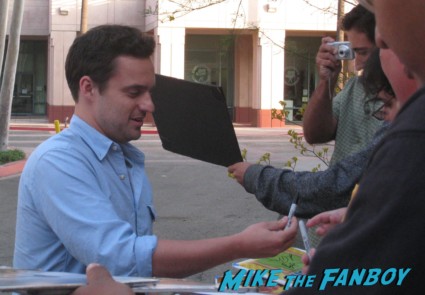 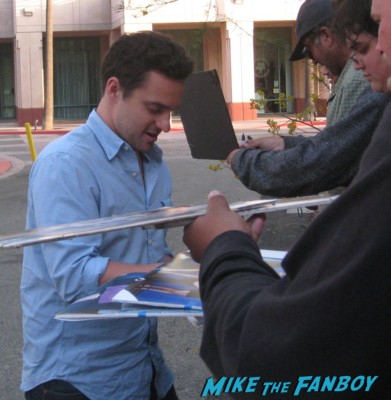 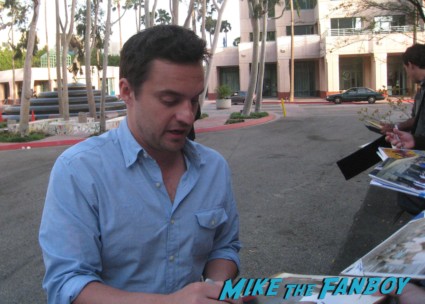 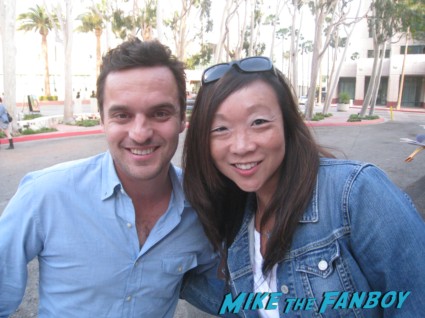 Now Zooey’s car pulls up. And then takes off. Literally. That’s what happened. The car pulled up, paused for less than 20 seconds and then drove off — around the building and to a side entrance that would take her straight on to press row. Oooookay, I guess that means she’s not coming over to us. 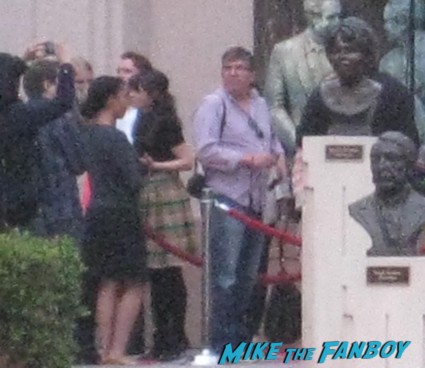 Then, finally, there’s Max Greenfield. At first we think we’re foiled because his car pulls up along the far side, almost where Zooey was ultimately dropped off. Our waiting army starts jogging across the lot to his car but security stops us and says he will come over to where we were. So we all file back and line up like good soldiers. Just like the other two guys, Max immediately comes over, signs and poses for pics. Truly, all three guys were so nice. 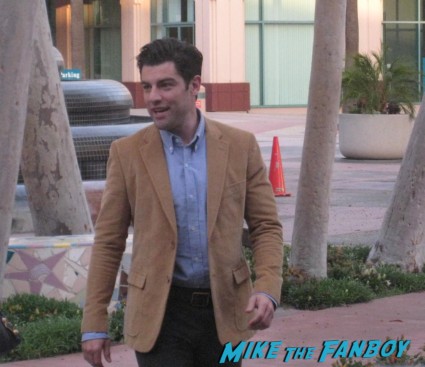 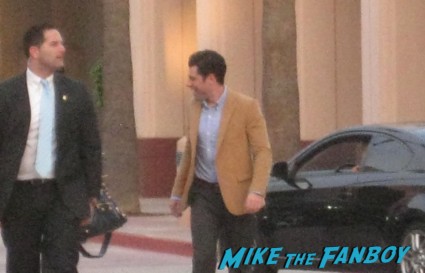 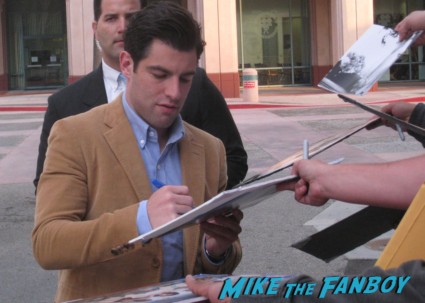 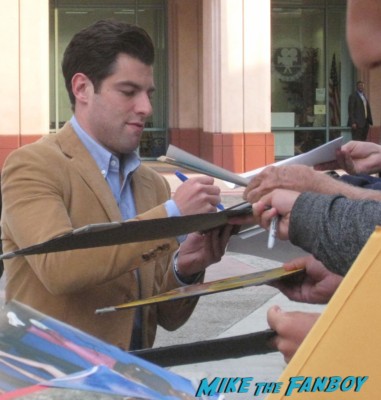 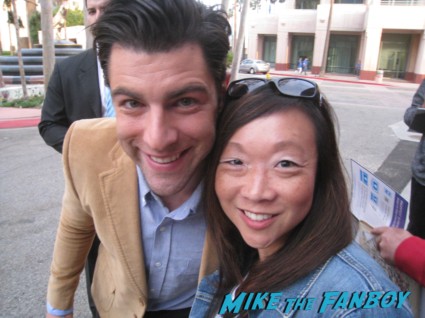 I scored three pics and I couldn’t have been happier. I decided to head home and not wait for exits. I heard some people stayed and were able to get Zooey and Hannah as they were leaving. But for my first “New Girl” experience, I was highly pleased and happy for a calm evening of order (sans barricades, no less) and three fun photos with stars from one of my new favorite shows.

That’s it for now…catch ya on the flip side!

So, on this day, much to my sadness Zooey Deschanel and Hannah Simone were definitely Dr. Jekyll!

For being so mean Zooey Deschanel and Hannah Simone are given the Angry Theo Award!