Let me tell you, this is awesome!

A new Walking Dead Daryl Dixon action figure set is coming out. It even comes with Daryl’s motorcycle! It’s pretty bad ass much like Daryl Dixon himself!

Fan-favorite Daryl Dixon, from AMC’s hit television series The Walking Dead, is a lone wolf survivalist who has proven time and again to be a vital sentinel for Rick Grimes and his group in an unpredictable and perilous apocalyptic world. This deluxe box set features Daryl Dixon with his iconic chopper motorcycle. The 5-inch tall figure’s exact likeness is created using a full 3D scan of the actor himself, Norman Reedus! This sculpt portrays Daryl in his angel wings stitched biker vest and includes approximately 20 points of articulation, hunting knife and updated crossbow. Daryl’s transportation of choice in this apocalyptic world is his brother Merle’s black chopper motorcycle. The first vehicle produced for The Walking Dead action figure line, this iconic chopper includes the lightning-bolt insignia on the tank, skull decal, and saddlebags. 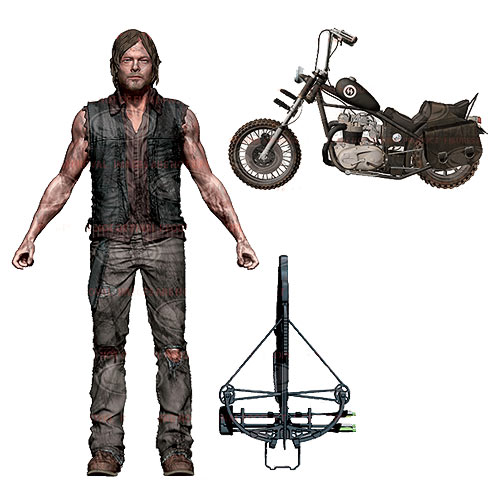