Nickelodeon is heading to comic con and bringing the 1990’s with it!

There will be some awesome activations at the booth, giveaways and talent signings as well. 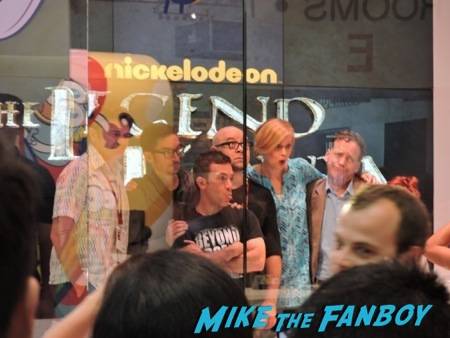 The ‘90s and Beyond are All That as Nickelodeon and The Splat Give Fans
an Immersive Retro Experience, from Booth to Panels and Special Guests

LOS ANGELES—June 28, 2016— Nickelodeon and The Splat–the network’s programming block dedicated to Nick’s legendary library of hits from the ‘90s and 2000s–are blasting open the vaults for a slime-tastic, immersive experience at Comic-Con International: San Diego 2016 that’s bound to be All That, and more. Headquartered at its 1,800 square-foot booth (#4113) on the convention floor, Nickelodeon will pay tribute to some of its most memorable shows and popular characters with activations, games, panels, talent signings and interactive design elements featuring: Legends of the Hidden Temple, Hey Arnold!, Rugrats, Double Dare, Aaahh!!! Real Monsters, CatDog, Rocko’s Modern Life, and Invader Zim, among many others.

“Those who dare to pass through the sacred gates of Comic-Con will enter a world of nostalgic treasures, artifacts and trivia from Nickelodeon’s beloved ’90s archives,” said King Olmec, Keeper of Nickelodeon’s booth. “The choice to enter is yours and yours alone, loyal fans.”

Every day of the convention, Nick’s booth will feature: a virtual reality 360-experience where fans can step into the world of the upcoming Legends of the Hidden Temple live-action TV movie; an interactive trivia game featuring Legends of the Hidden Temple’s King Olmec, Keeper of the Temple; photo opps with a life-size replica of the Hey Arnold! stoop and the nose from Double Dare; a retail area, where attendees can purchase a variety of exclusive Nick, The Splat and ‘90s-themed gear and one-of-a-kind collectibles; costumed character appearances; and autograph signings with cast member from All That, SpongeBob SquarePants’ Tom Kenny, Teenage Mutant Ninja Turtles voice talent, Kirk Fogg from Legends of the Hidden Temple, and more special appearances to be announced in the coming weeks.

Nickelodeon will present four panels during the convention: Happy Happy! Joy Joy!, a look back at 25 years of original Nick animation featuring the creators of Invader Zim, Hey Arnold! and other legendary series; Teenage Mutant Ninja Turtles–Return to New York, an exclusive first look at the current TV season; She Made That?: Nickelodeon hosts Women in Animation, featuring some of the genre’s female pioneers of the past and present; and a special reunion of cast members from legendary kids’ sketch-comedy series All That–with a surprise from Nick’s forthcoming Legends of the Hidden Temple TV movie. 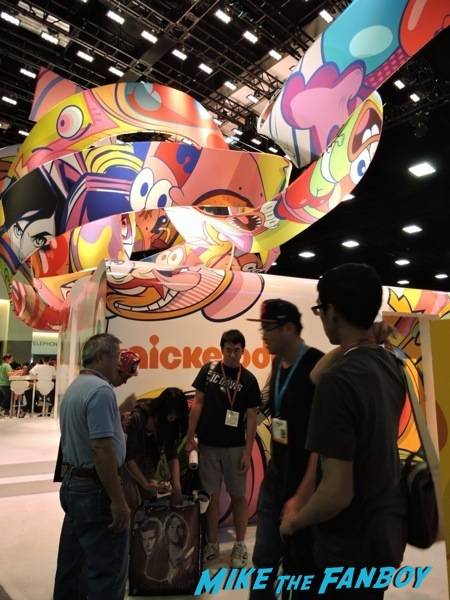 The following is a full rundown of the panels and booth activity:

Thursday, July 21, 11:15 a.m.-12:15 p.m. (Room: 6A) – For 25 years Nickelodeon has produced some of the most innovative and memorable animation in the history of television. Nick Animation Podcast host Hector Navarro finds out how and why four of the network’s most influential creators did what they did: Craig Bartlett (Hey Arnold!), Jhonen Vasquez (Invader Zim), Butch Hartman (The Fairly OddParents, Danny Phantom) and Arlene Klasky, who along with Gabor Csupo and Paul Germain, created Rugrats. Don’t miss the chance to see production art from the upcoming TV movie Hey Arnold!: The Jungle Movie; animation from Hartman’s new Bunsen is a Beast!; and the world premiere of Don vs Raph, a TMNT animated short written and produced by Jhonen Vasquez.

Friday, July 22, 11:45 a.m.-12:45 p.m. (Room: 6A) – They travelled time and space to save planet Earth, and now the Teenage Mutant Ninja Turtles return home! Executive producers Ciro Nieli and Brandon Auman share sneak peeks of the epic adventures and new characters that await the Turtles when they return to the streets of NY in season four. On hand will be the extraordinary voice actors of the TMNT world: Rob Paulsen (Donatello), Greg Cipes (Michelangelo), Gwendoline Yeo (Shinigami) and Eric Bauza (Tiger Claw). Also, witness the world premiere of two never-before-seen TMNT animated shorts presented by TMNT co-creator, Kevin Eastman. The panel will be moderated by Andre Meadows (Black Nerd Comedy).

She Made That?: Nickelodeon hosts Women in Animation

Friday, July 22, 6:30 p.m.-7:30 p.m. (Room: 24ABC) – Join this group of innovative and pioneering female cartoon creators for a discussion on their careers and the opportunities for women in animation today. Panelists include women responsible for the original Nicktoons from the 1990s and others who are making some of today’s best animation for TV and the web. The panel will include Lauren Faust (My Little Pony: Friendship Is Magic), Mary Harrington (Invader Zim, Hey Arnold!), Vanessa Coffey (The Ren & Stimpy Show, Rugrats), Rikke Asbjoern (Pinky Malinky), Margaret Dean (Women in Animation) and Maija Burnett (California Institute of the Arts).

Back to the ‘90s: Nickelodeon’s All That Reunion and Legends of the Hidden Temple!

Saturday, July 23, 11:15 a.m.-12:15 p.m. (Room: 6A) – Join Nickelodeon’s throwback programming block, The Splat, for a reunion of the trailblazing sketch comedy series’ major players, Josh Server, Danny Tamberelli, Lori Beth Denberg and Kel Mitchell, discussing all things All That, with a few added surprises. Plus, get the first look at Nick’s new TV movie based on Legends of the Hidden Temple and hear about it from returning cast members Kirk Fogg and Dee Bradley Baker, along with Isabela Moner (Transformers 5). The panel will be moderated by Entertainment Weekly staff writer, Marc Snetiker.

Legends of the Hidden Temple Virtual Reality 360-Degree Experience: This 360-degree experience transports fans into the world of the upcoming action-adventure TV movie inspired by the iconic game show, allowing them to experience the mysterious Mayan temple first-hand.

Olmec Photo Opp/Trivia: Fans can interact with Legends of the Hidden Temple’s King Olmec and test their knowledge by answering trivia questions for the opportunity to win prizes.

Hey Arnold! Stoop and Double Dare Nose Photo Opps: Fans can take photos on a replica of Arnold’s stoop from Hey Arnold! and with the nose from Double Dare (beware of boogers).

Giveaways: Enter for a chance to win special prizes over the course of the convention.

Additionally, in celebration of the Aug. 11, 25-year anniversary of the launch of the network’s original animated series (The Ren & Stimpy Show, Rugrats and Doug), The Splat will feature brand-new commentary and behind-the-scenes information from the series’ voice talent and creators, along with themed programming and encore airings of these animated series every night during the month of August.

Nickelodeon’s The Splat is a multiple-screen destination spanning television, eight social media platforms and a dedicated web site aggregating the most loved Nick content from the 1990s and beyond. Celebrating the characters and shows that are definitional to millennials who grew up in the ‘90s, The Splat consists of: an eight-hour television block airing daily from 10 p.m.–6 a.m. (ET/PT) featuring landmark Nickelodeon programs and classic programming stunts; a fan-driven website (www.TheSplat.com) built around social conversations; a robust social media community on Facebook, Instagram, Pinterest, Snapchat, Tumblr, Twitter, Vine and YouTube platforms; and a fully integrated Splat-branded emoji keyboard with emoticons, stickers and GIFs.

Nickelodeon, now in its 37th year, is the number-one entertainment brand for kids. It has built a diverse, global business by putting kids first in everything it does. The company includes television programming and production in the United States and around the world, plus consumer products, online, recreation, books and feature films. Nickelodeon’s U.S. television network is seen in more than 90 million households and has been the number-one-rated basic cable network for 20 consecutive years. For more information or artwork, visit http://www.nickpress.com. Nickelodeon and all related titles, characters and logos are trademarks of Viacom Inc. (NASDAQ: VIA, VIAB).