So, here’s where I’m a bad fanboy… Bad Fanboy bad!

And then I uttered some expletives and said to myself.. Damn you Mike! Damn you! If you can damn yourself, apparently I did. I should say, “Bless you Mike! Bless you!”

Anyway, before I go on my tangent, which apparently I’m doomed to do, I had to get Pat’s Nicole Kidman recap up. He went all the way across the pond to see if he could get her to sign a custom Batman Forever figure.

Yes, he made his own Nicole Kidman!

So I guess it WAS worth bringing the custom “Batman Forever” figure I made of Nicole Kidman all the way to England.

There was about 30 or so people waiting at the stage door of her play “Photograph 51” in London. At first she was only signing programs, as her security goo… err… handler made it abundantly clear (“She’s not going to sign that”, repeated to me several times) Oh yeah? Like hell, pal.

I was able to put it in front of her as she was signing and told her I had made it and brought it all the way from the US. She said “Wow that’s amazing!” and promptly passed over it. D’oh!

She continued signing (and was being very nice to everyone I might add) and so I kept it hovering it near her view. When I was sure I could get her attention again I repeated that I had brought it all the way from America and PLEASE. She finally took it from me, signed it, handed it back and gave me a nod, a slight smile and a look like “Don’t say I never did anything for you”. 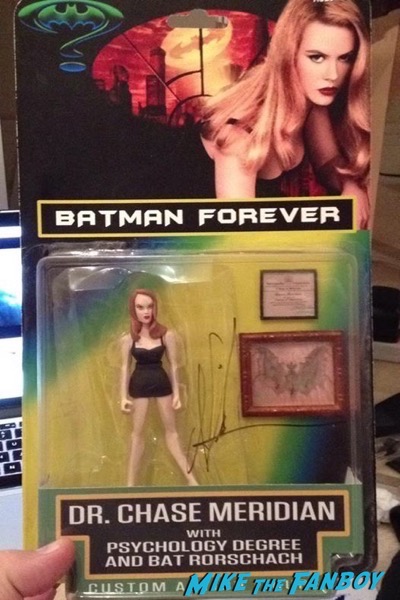 Whew! One major piece out of the way! That was a tough one. Only had to go 5500 miles for it… I had a hunch she might be a little more fan-friendly in the UK. Glad I followed it.

Side note: call it shadenfreude if you like, but I absolutely LOVE usurping the authority of celebrity security. I know it’s their job and all but MAN is it satisfying…