NYCC is right around the corner and Mezco has revealed one of it’s exclusives that will be available at the event! The Breaking Bad Vamonos Pest Jesse Pinkman 6inch Figure, looks amazing! I have one of the Walter White figures and I’m sure this one will be the same top quality.

If you’re at NYCC you can head down to the Mezco booth and pick one up, or if you’re like me and can’t, you can pre-order one online!

Check out the pics and full description below!

Mezco Reveals Mystery New York Comic Con Exclusive: Breaking Bad Vamonos Pest Jesse Pinkman 6inch Figure
“The anticipation that has been building up over what this limited edition mystery figure is has been tremendous, and that makes this reveal all the more satisfying” says Mezco’s  Mike Drake, “fans have been clamoring for a Vamonos Pest version of Jesse to match the Vamonos Pest Walter White we released earlier, and being able to give the fans what they have asked for is a huge thrill for all of us as Mezco”. 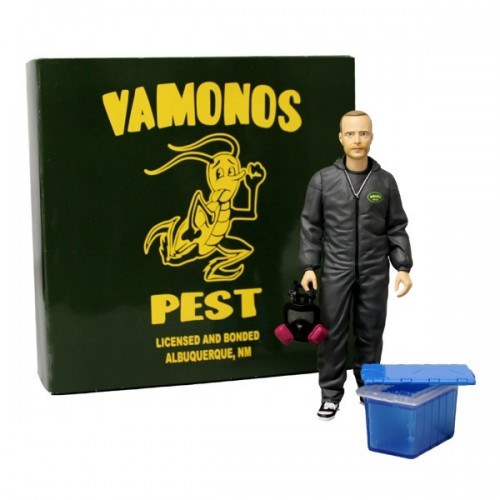 The exclusive, limited edition figure is presented in a deluxe window box with a Vamonos Pest slipcase. Jesse comes complete with an episode accurate removable respirator, and a bin with hinged lid as seen in the series.  The back of his outfit features the Vamonos Pest logo.

The figure will be available at Mezco’s New York Comic Con booth, # 1855 starting Thursday 10/09 while supplies last.  Additionally, a limited number of figures will also be available on Mezco Direct starting on 10/01 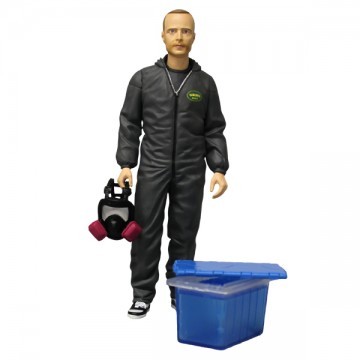