Home / Conventions • The Lovely Erica / Marvel’s Agents of SHIELD signing at NYCC! The cast touches down before heading off to space on December 1st!

For the first time ever, the full cast of Marvel’s Agents of S.H.I.E.L.D. assembled at New York Comic Con! Usually they bring 2-3 cast members, but this time the whole crew came out to greet fans.
Crowd favorites include the ever-lovely Ming-Na Wen. Her fans (“Mingalings”) came out in force with custom t-shirts and such.  One fan flew over 25 hours just to meet Ming, her hero. 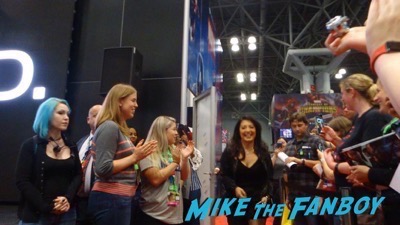 Chloe Bennet is a regular at NYCC and always happy to meet anyone cosplaying Quake. She got up in the middle of the signing to grab a quick picture with a couple of Quakes. One Quake was particularly weepy after the photo since she’s also half-Chinese. (Representation matters!) 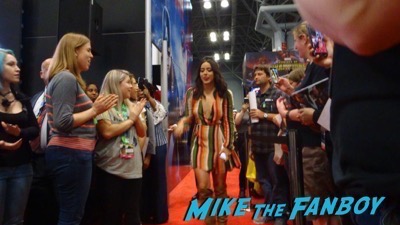 And everyone loves Clark Gregg who loves everyone back. Last year he held an impromptu trivia contest and gave away shirts. This year, he just randomly got up during the signing to hit the crowd. You know, the usual! 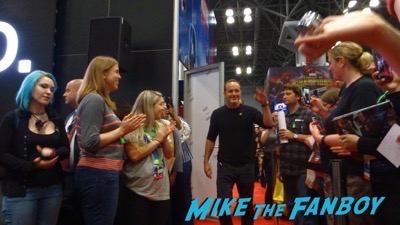 Elizabeth Henstridge is just as friendly as ever. Iain De Caestecker is a sweetheart even if he’s a bit shy. The last time I talked to him was before the show started and his brogue is a little pronounced, but still as hypnotic as ever.
There was a really enthusiastic crowd waiting for the cast since this was one of the biggest signings of the con. Henry Simmons thought that honor would belong to The Walking Dead. I pointed out that they don’t meet the fans and Henry was genuinely confounded on why they wouldn’t. (Good man.)
Natalia Cordova-Buckley, newly promoted to full-time cast member, seemed to be drinking in her first SHIELD signing with an enthusiastic smile for everyone.
After the official signing line finished, Clark led the way to hit the crowd watching the signing. The whole cast jumped off the stage and had to be corralled back up to take a final group photo. It’s great when the cast returns all the love to the fans!
Marvel’s Agents of S.H.I.E.L.D. moves to Friday nights starting December 1st on ABC. 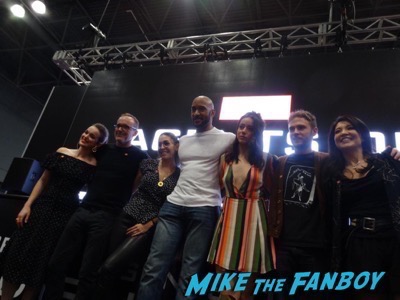