Jurassic World is a slot based on the 2015 film of the same name. Developed by Microgaming, which also developed a slot based on the original Jurassic Park, the slot uses a 5×3 layout with 243 paylines and it has an RTP of 95.45%. The game’s symbols are based on the film’s characters including Owen Grady and Claire Dearing, and it also includes symbols based on various dinosaurs.

The popular video slot is packed with various features too including three Free Spins modes with various bonuses including an increasing Multiplier, Rolling Reels and Cryo Wilds, and Scatter symbols. Like most modern-day slots, there are also Wild symbols to help you make more wins.

If you want to spin the dinosaurs around, Casinostoplay.com has a list of sites that offer this unique slot to their players.

Dirty Dancing is a Playtech video slot which is based on the romantic drama film of the same name. This classic slot uses a 5×4 layout with 40 paylines and it has an RTP of 94.49%. The game’s symbols are based on characters from the film and various objects related to the couple. It also includes sparkly traditional playing card letters and numbers.

Some of the special features in the game include a Jackpot Game where players can win big sums, Wild symbols that substitute for other symbols, and a Scatter symbol too. There’s also a Wheel Bonus which allows you to select various Free Spins modes and Multipliers. All of this will help keep you busy for a long time.

Mars Attacks! is a video slot developed by Blueprint Gaming. The game is based on the 1996 comedy film of the same name and it uses a 5×3 layout with 20 paylines. Symbols in the game include the aliens, their terrifying guns, eyeballs, televisions, and playing card letters and numbers.

One of the benefits of playing this slot is that it’s packed with special features which can potentially help you make more wins. The features include Wild symbols that substitute for wins, Bonus symbols to trigger bonuses, and more. There are also Alien modifiers that are triggered randomly on any spin which affect the reel and apply various effects to it. 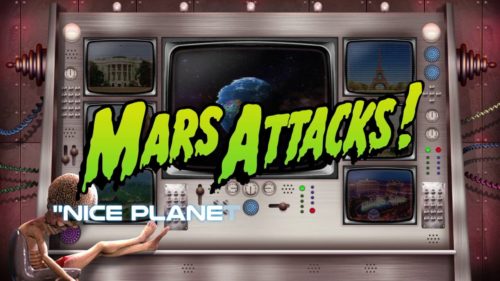 A Nightmare On Elm Street by 888 Gaming

888 Gaming’s A Nightmare On Elm Street is a video slot based on the 2010 horror movie of the same name. The slot uses a 5×3 layout with 30 paylines and it has an RTP of 94.87%. It features visuals inspired by the film including a paytable covered in droplets of blood that is filled with terrifying images of Freddy Krueger. Symbols in the game are all based off characters from the film and it also features the traditional playing card letters and numbers.

Special features in the slot include Wild symbols which substitute for most other symbols to help create more wins, Scatter symbols which trigger the game’s Free Spins mode, a Pick Me symbol which triggers the game’s Pick Me bonus for cash prizes, Expanding Wild symbols for even more wins, and so much more. One thing’s for sure, the countless special features will help keep you up at night… 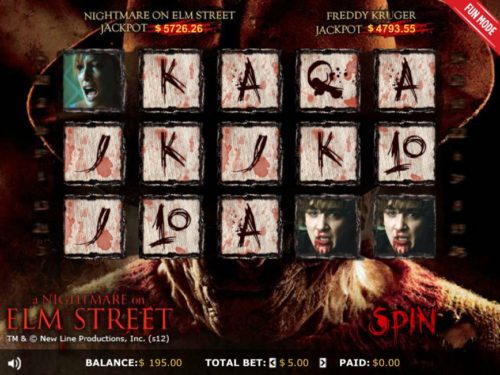 Tweet Pin It
Tags:Online Slots Based On Popular Movies, Pop Culture Madness! How Popular Movies Have Taken Over Gaming! Jurassic World! A Nightmare On Elm Street! And More!