Being bold means stepping up in social situations by disregarding risks and consequences. After all, actions speak louder than words and individuals always take notice.

Set in a fantastical suburban world, Ian Lightfoot (Tom Holland) is about to turn 16-years-old and has always wanted to be like his father Wilden (Kyle Bornheimer), who sadly passed away before he was born. Despite being surrounded by elves, sprites, satyrs, cyclops, centaurs, gnomes and trolls, magic has been rapidly disappearing from this mythological world after technology transformed their society. Although Ian never knew his father, he has constantly strived to be more like his father, bold and brave. Ian’s older brother Barley (Chris Pratt) comes across as a big burly, bumbling buffoon obsessed with role playing games. He might be full of confidence, but his obsession with the past hinders him from actually living his own life. Their devoted mother Laurel (Julia Louis-Dreyfus) throws herself into everything and is always demonstrating the best of her boys. Laurel has a relationship with centaur police officer Colt Bronco (Mel Rodriguez), who struggles connecting with Ian and especially Barley, who constantly challenges the respectful nature of authority. After embarrassingly attempting to overcome his awkwardness at school and be bold, Ian comes home to receive a  unique gift. Wilden left behind a special gift to be opened once the boys were each 16-years-old. The two teenagers unwrap and unfurl a wizard staff, which comes with a special spell that can summon Wilden back for 24 hours. Despite the best of intentions, the boys mess up the spell and must go on a quest before time runs out. 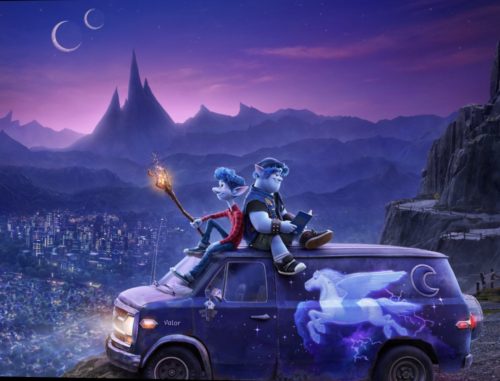 Pixar perfectly captures the human spirit splendidly once again in this fantastic film with their proven formula for humorous, heartwarming movies. Director Dan Scanlon knocks it out of the park again like his previous picture, “Monsters University.” The unique universal struggle of getting one last chance to interact with a lost love one is completely relatable. The characters might be fantastical, but are extremely emotional and relatable to cement “Onward” as an amazing accomplishment. The joyous juxtaposition of a mystical setting with a suburban style twist transforms a fantasy story to so much more. The beautiful balance of fantasy and family make it initially recognizable and relatable.
Casting Chris Pratt keeps paying dividends. Pratt’s portrayal of Barley is if Andy Dwyer (“Parks and Recreation”) was a Dungeons & Dragons obsessed teenager. Honestly, how effortlessly Pratt inhabits multiple franchises (“LEGO,” “Guardians of The Galaxy,” and “Jurassic Park”), he’s become a modern day Harrison Ford with capturing audiences’ attention. I also think he’s Tom Hanks 2.0 thanks to his distinct Disney roles thus far. Regardless, Pratt perfectly captures the energy, enthusiasm and entertainment needed in every role cementing each performance as the standout regardless of genre. Pratt can be the best friend, leading man, and the big brother, especially the latter in “Onward” because of the cosmic chemistry he has with fellow co-star Tom Holland.

Tom Holland’s timid transformation simultaneously works wonders awakening the best in his character and the audience. There’s something undeniable with how humble, humorous and endearing Holland has continually captured our hearts with stellar, standout performances. By the end of the film I was balling my eyes out and was won over by the emotion evoked throughout. Holland has entered that next stage of exploring more challenging characters and he certainly knocks it out of the park here!
Like most magnificent Pixar supporting casts, “Onward” has a stellar supporting cast with Julia Louis-Dreyfus, Mel Rodriguez and Octavia Spencer rounding out the bunch with cameos by Ali Wong, Tracey Ullman, John Ratzenberger and Lena Waithe. Unlike previous Pixar films, you’re not fixated on who is voicing what character and instead are drawn into the depth of each character. Honestly, with the exception of one character who makes a throwaway and unnecessary pandering comment, the film was very well cast and makes an immediate impact. Disney and Pixar at its best! 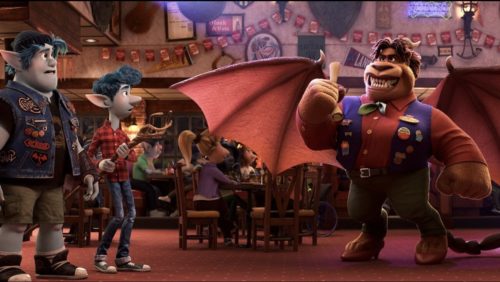 Director Dan Scanlon with his fellow writers Jason Headley and Keith Bunin beautifully constructed an enchanting, entertaining relatable story filled with fantastic animation. The recent resurgence with “Coco,” “Up,” and “Inside Out,” feels like another amazing renaissance taking place at Pixar perfecting animation and attracting amazing stories which feel universal. This is one fantastical, fun and fresh film you don’t want to miss!
4 out of 4 stars
Share on Facebook