Home / Fanboying! • Karalee / Oprah Winfrey Goodness! Karalee Meets The Icon And Gets Her Photo With Her! Say Wha!

Oprah! God bless her! At the SAG Awards, which I realize I have not written my recap of, but Karalee got to meet one of the cultural icons of our generation! Yep… Oprah!
Who would have thought she would have come over to sign for the fans! Seriously!

Not me! That’s for sure!

Check out Karalee’s full recap below!

Oprah. One name. One woman. One icon.

It’s not every day you see the living legend in the flesh, up close. The wondrous one graced the red carpet at the recent Screen Actors Guild Awards; she was nominated along with the cast of “The Butler.”

Needless to say, with red carpet star power like Bradley Cooper, Julia Roberts and Meryl Streep, the world stopped for a bit when Oprah was spotted. Fans in the bleacher seats lost their minds and chants of “Oprah! Oprah!” soon commenced. The hope, of course, is that Oprah would leave the main red carpet path and engage with fans in the elevated bleacher seats. Given that stars of, ahem, shall we say, lesser stature opted not to come over (i.e. Josh Holloway, Jim Parsons, Jennifer Garner), I didn’t hold out much hope that Oprah would make the mini trek.

Well, slap my tookus and call me Sally, because not only did Oprah cross over, but she signed several autographs and charmed fans down a solid portion of the row. 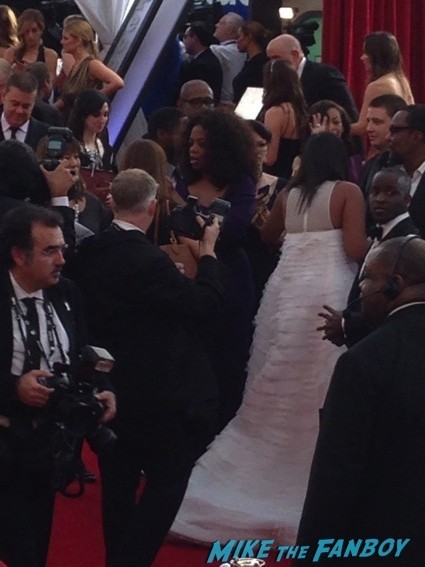 I really couldn’t quite believe that she came over. As she got closer to where I was, I thought, “Well, here’s your one shot to try and get a picture with Oprah. Even if she turns you down, you tried.” 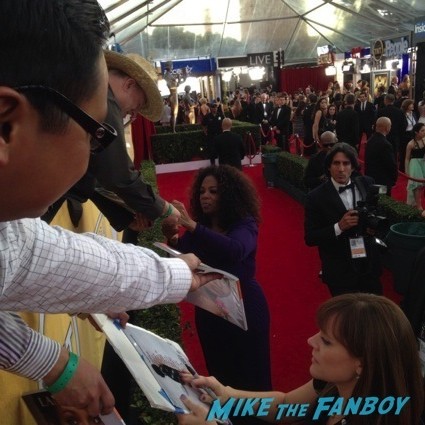 MTF friend and bleacher buddy Ronald was hoping for a photo with her too. We decided to team up and take pics for each other (selfies are next to impossible, given the 6-foot height difference of the bleachers). Ronald was to my left so Oprah got to him first. She signed his magazine cover and he asked for a photo. “How would we do that?” she asked, while still signing for some other fans who had wormed their way between us; as far as we could tell, she wasn’t really stopping for photos, just signing autographs. I had the camera ready and said “Right here!” She looked up, I clicked and Ronald got his photo.

She’s picking up the pace a bit now as she has worked a huge section of the bleachers and the ceremony is about to start. Ronald gets his camera ready and she moves to my right to sign for Anushika (I have nothing for her to sign, as I’m all about the photo ops). As she’s signing, I ask, “Ms. Winfrey, could I please get a picture too? My friend has the camera ready to your right.” As she’s signing, she looks up and Ronald snapped the photo. 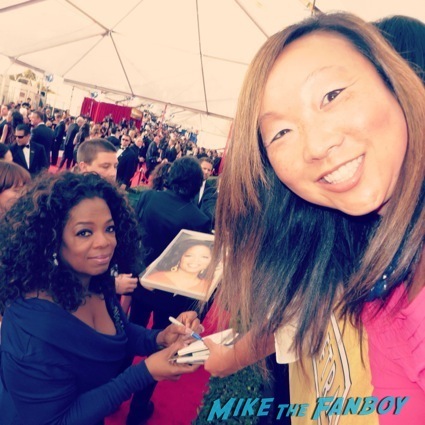 I fully realize I look like a crazed person, but when you get a nano-second to get a photo with Oprah in the same frame, you’re a cheeseball loon and lose all sense of facial awareness. I yell thank you as she continues to sign for more fans before heading back to the main red carpet and the media area. Ronald and I high five and take a deep breath. Those few Oprah minutes were the most exhausting of the entire red carpet arrivals. But so worth it. 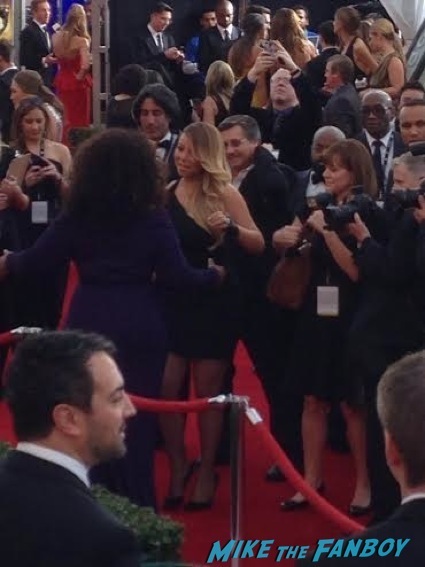