Home / Fanboying! • OTG John / OTG John Recaps The Dr. Who DVD Signing At Amoeba Music In Hollywood With The Dr. Himself Matt Smith and Karen Gillian!

Hey guys, we have a new contributor for the end of 2011! Even OTG John has been around the MTF -verse… (look at that, I have a MTF-Verse!) for a while, regularly commenting on the MTF Facebook page, this is his first actual write up! So make sure and give him a warm welcome!

John did a great recap of the Amoeba Music Dr. Who DVD signing. I was actually planning on going to this, and even talked to Erica about it, but alas, you can’t do it all. I’ve wanted to start watching the Dr. Who saga ever since Kylie Minogue guest starred in it a while back, but it’s still in my Netflix queue!

What can you do right? I have to say, I wish there were more DVD signings, and generally speaking Amoeba is pretty cool about their events… Most of the time…

Check out OTG John’s full report after the jump!

OTG John here! The OTG stands for Old Time Grapher. This is my first and hopefully not my last post for Mike the Fanboy. The reason I haven’t posted sooner is because I’ve been in the hobby for over 40 years. I have seen them all from John Wayne to Marlon Brando and it would have to take something “special” for me to take time out and do a writeup on somebody. Plus the fact that I’m lazy! Lol!

In 2011 the only highlight for me was getting Kylie Minogue, Lady Gaga and Katy Perry. AND…..the cast of my number one favorite show, the UK import Doctor Who. With the exception of Comic Con and an occasional press junket, sightings of the actors are extremely rare in the US. I have met the current actors Matt Smith and Karen Gillian a couple years back at a BAFTA preview screening. Both were extremely nice but I always have plenty of more items for them to sign. First a little background for you who aren’t familiar with the show. Doctor Who originally started way back in 1963 as a children’s show with actor William Hartnell in the title role. From 1963 to 1983 six other actors ( Patrick Troughton, Jon Pertwee, Tom Baker, Peter Davidson, Colin Baker and Sylvester McCoy ) portrayed the doctor. Seven if you count the two movies with Peter Cushing. 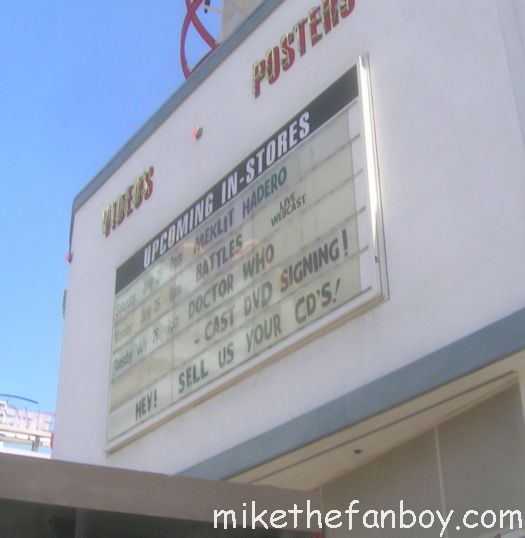 The show was about a mysterious person who would travel in time and space in a ship that resembles a UK Police Box. One of the clever plot devices the show would use is the concept of regeneration. If an actor grew tired of the role and wanted out of the show it was explained that the doctor’s body would change after a rough encounter with a villain or he get’s sick from some alien virus. That way the “old” doctor merges into a “new” doctor. Pretty smart writing! After 1983, the Doctor laid “dormant” for the next 13 years. Then in 1996 FOX TV tried to revive the series with a TV movie/pilot with actor Paul McGann as the 8th doctor. Though ratings were decent it wasn’t enough to kick start the series.

It wasn’t until 1996, almost 13 years latter, that the franchise finally came back in all it’s glory! Then it starred Christopher Eccleston ( 28 Days Latter and GI Joe ) as the Doctor and Billie Piper ( Secret Diary of a Call Girl ) as his traveling companion. Eccleston left after only one season and was replaced by David Tennant ( Fright Night ) probably the most popular of all the actors to portray the Doctor. But all good things come to an end. And in his finale episode, entitled The End of Time, Tennant passed the torch to actor Matt Smith. Now with his traveling companions played by Karen Gillian and Arthur Darvill the doctor continues to fight evil and to protect the earth from all harm!

Anyway, to my awesome encounter with Matt and Karen. First my apologies for the delay in writing this up. This happened way back in July! The signing took place on July 26 2011 BUT I had to pre-purchase a dvd to get a wristband for a place in line. Only 200 wristbands were given out! I had to do this on the 19th. I knew the show had a fan base so I got up at 4am to assure I got one. I got to the venue at 6am and there were already 134 people in front of me. With people saving places in line ( I HATE THAT! ) I wound up being #175. It was close but I got the wristband. 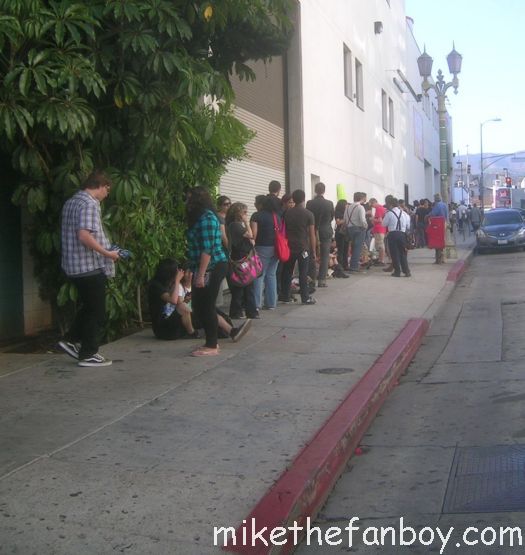 Fortunately since the wristband guarantees you a spot for the meet and greet I didn’t have to be at the actual signing so early. The actual signing was at 7pm. Of course I still got to the signing a little early, 2pm., mainly to beat the traffic coming down from the O.C. to Los Angeles. I took some photos to mark the occasion and then I got in line. Oh, it was only one wristband and one item of your choice per person. Thank god, though you had to purchase the DVD, you didn’t have to get that signed. It was one of anything you wanted. 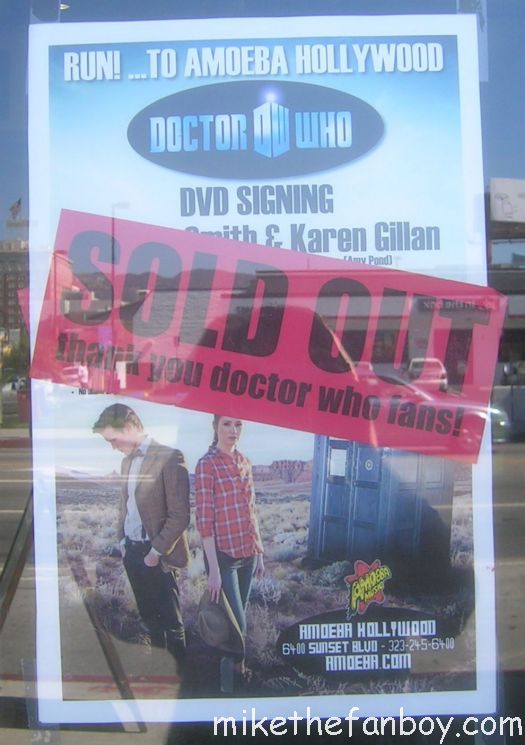 I chose to get a nice 12X18 promo photo of Matt and Karen from the episode The Impossible Astronaut. Also a friend sold me his wristband since he got Matt and Karen at Comic Con. So I could get an additional item signed. For this trip I got 12X18 solo images of each signed. The signing went smoothly, ALMOST. While the stores employees were as nice as can be, I can’t say the same for Matt and Karen’s publicist! What a #@*%$@ bitch! With only 200 wristbands I felt I shouldn’t have been “rushed” through. First trip in line it was ok. Though I was still rushed I still was able to converse with Matt and Karen somewhat . I had Matt write “Stinsons are cool”, a line from the episode. He and Karen laughed. The photo opp was rushed and I didn’t even have time to look at the camera! 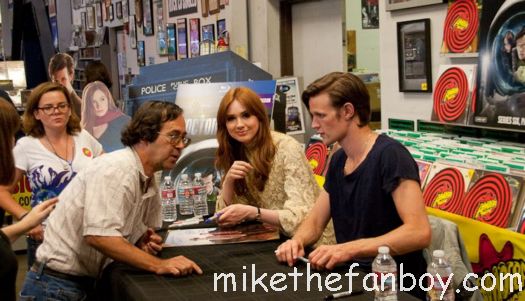 The second trip was a pain though. Even though the employees of the store questioned how I got a 2nd wristband they were still cool to me. But, like I said Matt and Karen’s publicist was a bitch and very rude to me. She kept babbling that I stole the wristband and that I snuck in line. All the time I’m arguing with her it freaked out Matt and Karen to where it made me look like some kind of stalker. I still got my additional item done BUT I was targeted by the publicist. 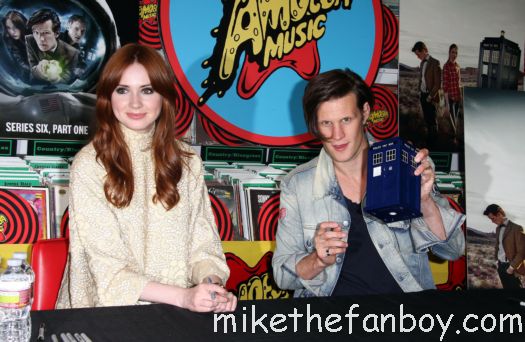 A side note: two days latter I found out that Matt and Karen were doing a press junket on the show over at the Beverly Hilton Hotel. Knowing that the Hilton will kick you off the property if you are not a guest of the Hotel, I only came in with my camera and no graphing material. Though I have a duo opp and a solo opp with Karen, my goal was just to take a picture with Matt. Simple, right? Hell no! Figuring that the bulk of the interviews would be done by the pool area I scooped it out first. Sure enough I saw Matt and Karen down there AND they were taking opps with the hotel guests. Awesome! I was going to get my opp with Matt finally! WRONG! Right when I start to get up to Matt that stupid publicist gets in my way. Saying ” They don’t have time blah blah.. they have to go to work!” BULL!! Then why were they doing it with everybody else? Of course because I was spotted/targeted from the dvd signing a couple of days back. What a bitch! I hope if I see Matt and Karen the next time that publicist won’t be with them! Anyway that’s my Doctor Who writeup. Take care readers! Until next time this is OTG John signing off!