Home is where they have to take you in, right? This is one of those Outlander episodes where nobody comes out looking good. Brace yourself!

Since “Alexander Malcolm” is wanted for sedition, Jamie Fraser heads home to Lallybroch with Claire and Young Ian. Jenny greets them with a cold shoulder since they were hiding the runaway scamp (Young Ian) and Claire is alive. (More on this in a moment.)

Young Ian protests that he was out in the world, making a living and earning a wage. He’s very proud of his abilities at selling smuggled liquor (Fergus even praised him on it) and he was doing verra well until the fire and the dead taxman. Whoops! Learning illegal trade skills does not endear this adventure to Jenny.

Jenny and Ian rip into Jamie who protests he loves Young Ian like his own. Ian says fine, then whips off his belt and tells Jamie he can give the lad a good thrashing like a dad. Instead, Jamie proposes that Young Ian be sentenced to dung labor on the farm. Young Ian would rather be whipped so Jamie’s mission is accomplished. Ian and Jamie make their peace. One down.

Jenny is mad at Claire for being alive and not telling her. She doesn’t trust Claire and Claire feels it. Brrr! Winter comes early in the Highlands!

Jamie is excited at being home and suggests they build a little cottage here. (Sure, it takes a possible hanging in Edinburgh for Jamie to move out of the brothel.) Claire’s not keen since that means more quality time with Jenny the Iceberg.

Then we get a slight tangent when Jamie tells Claire what happened when he snuck out of prison to go look for a white lady and hunt for the Frenchman’s gold. Jamie swam out to the picturesque island but didn’t find Claire. Instead he found a buried treasure chest with all the rich stuff. He couldn’t take it back to prison so he took a sapphire that he gave Lord John Grey. Jamie went back to prison since the men needed him. So magnanimous of him. 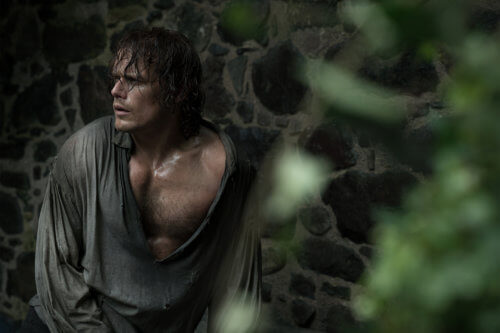 There are some touching words between them, when Claire notices Jamie’s a bit troubled. He gets ready to tell her something when two girls burst into the room, happy to see him. The youngest girl (Joan) calls Jamie “Daddy” which makes Claire’s jaw drop. Then a screaming Laoghaire bursts and little Joan asks mom and dad to stop fighting.

Not only is Jamie married, but he married LAOGHAIRE! The scheming girl who almost got Claire burned at the stake. (Gellis didn’t escape and went to a fucking barbecue, remember?) Yeah, THAT Laoghaire.

Jamie shoos Laoghaire, Marsali (the teenaged girl) and Joan out while Claire recovers her wits and starts to get dressed.

Jamie returns to Claire and they have it out. Jamie clarifies the girls aren’t his and he’s only been married a few years and they live apart. While Claire stomps about getting ready to leave he admits he was too afraid to tell Claire. (Gee, wonder why?) Jamie won’t let her leave him again and grabs her and they start fighting/makeup sex. Jenny breaks into the room, throws water on them (yes, she actually uses that trick) and tells them to stop making such a ruckus.

Claire storms downstairs to gather her thoughts and Janet (one of Jenny’s million or so kids/grandkids) apologizes to Claire for telling Laoghaire. Claire asks why she did it and Janet says Jenny told her to. Uh oh.

Jenny wants to know why Claire kept silent for so long. Claire says she married someone else and had to forget the past. Jenny kens that’s true, but not the whole truth. She tells Claire they won’t ever be the same again. Ouch. Forget a scorned lover, that doesn’t hold a candle to the hell fury of this sister-in-law.

Right. So Jamie married Laoghaire and Jenny is freezing her out. The next morning, Claire resolves to leave and head back to her own time. Jamie tries to stop her and then Laoghaire shows up with a gun. She wants to shoot Claire, but accidentally hits Jamie instead. She skeedaddles out of there. Eh, that about sums up Laoghaire. 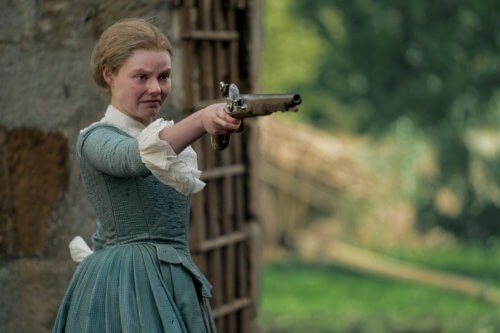 Claire’s got a patient so she grabs Jamie and sets to work. The household scrambles for supplies as Claire has to remove the buckshot out of his shoulder. Young Ian is the only one that stays to assist Auntie Claire. They bond over Jamie’s semi-conscious body. So touching…

After surgery, Claire wants the whole story of Lagohaire from Jamie. Basically he married Laoghaire for the girls. Not in that creepy sort of way, but because they gave him an instant family. He really just wants to be a dad. Tug at our heartstrings!

Claire notices he’s running a fever so she reaches into the Batskirt to pull out a penicillin kit. She doses Jamie who wonders how a needle in his backside is supposed to help his arm. She reminds him about “germs.” Oooooooo…

Since Claire saved Jamie and Jenny is the reason Jamie got together with Lagoahire, Jenny sort of makes peace with Claire. Kind of. It’s still frosty but maybe not the dead of winter. 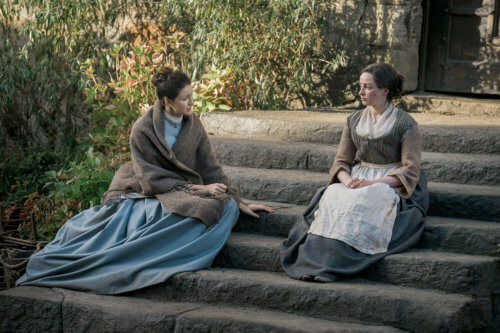 Lawyer Ned Gowan arrives and says Laoghire is already talking trash about Jamie and Claire. They have the gun so they can try to get her arrested and deported. Claire’s all for it, but Jamie doesn’t want to hurt Marsali and Joan. Instead they can pay her a ridiculously large alimony.

Jamie wants to grab the Frenchman’s treasure, sell the goods in France and use the proceeds to pay her off. He proposes taking Young Ian along since he needs an adventure like Jamie and Ian had when they were about his age. Ian and Jenny reluctantly agree.

So Jamie, Claire and Young Ian head out to grab the treasure. With Jamie’s injury, Young Ian has to swim and grab the chest. (How was he supposed to swim back carrying a treasure chest, we’re not sure…)

Claire and Jamie observe from the cliff when Claire confesses she’s not sure about their relationship. Jamie asks if she’s willing to risk the man he is now for sake of the man she once knew. (Such a great line!) We’re all eagerly awaiting her response, when Claire notices a pirate ship is landing on the island. Way to ruin a great line, you pirates! Argh! 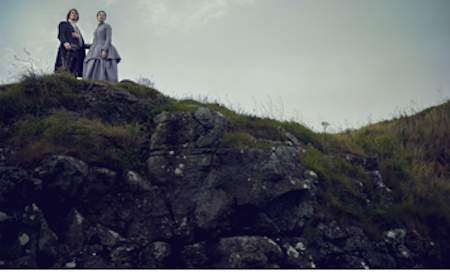 Young Ian doesn’t seem them and gets abducted. This isn’t going well. And they’ll need to tell Jenny and Ian.

Erica: If Lord John Grey’s family used their influence to clear Jamie’s name, why is he using an alias in Edinburgh? As a precaution for all his illegal activities? Am I missing something here?

Alicia: I was under the impression that he was using an alias because of the seditious pamphlets and liquor smuggling. If he’s caught, it won’t reflect back on Lallybroch and his family. At least that’s my guess.

Erica: Lallybroch is not quite the haven we remember. Jenny’s temper has not mellowed with old age.

Alicia: LOL. Oh Jenny. She’s a feisty one. Ian’s a bit more ornery too. I remember him being a little more laid back. I feel Young Ian is enough to turn a saint, though. 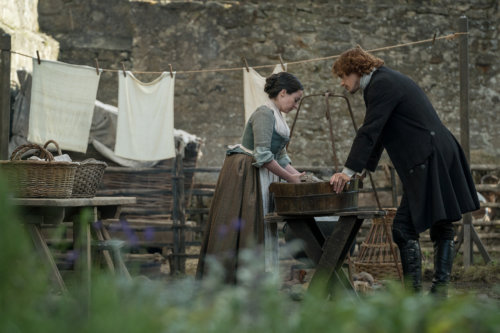 Erica: I love how Young Ian calls Claire “Auntie.” They needed a bit of bonding before he was kidnapped by pirates.

Alicia: Right? I mean, you gotta admit Claire has a point right before that happens. Nothing has gone right since she’s returned, but then again Jamie has a point when he says something to the affect of ‘has it ever’? I mean can these two have just a year or two of relative calm? Yeesh!

Alicia: Wow! I feel like all that tiptoeing around each other and feeling out this reunion stuff finally came to a head. It’s been building, I’ve been waiting for that thing that would tip the point but LOAGHAIRE?!?!?! UGH!!!!! Seriously! Ew. Even after he explains why he married her, just ew. Although in my head I’m saying every explicative I’ve ever heard and probably making up a few as well. I mean, I don’t blame Jenny, she wants her brother to be happy, but how could Jamie? Seriously!

Erica: Geneva, Laoghaire…Jamie attracts some horrible women who won’t stop at blackmail or murder to get him. He’s so lucky he was forced to marry Claire! 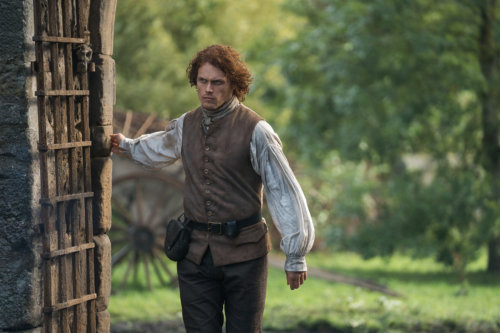 Erica: Here’s the episode you’ve been dreading. You still breathing?

Erica: But tell us how you really feel…

Alicia: I’ve dreaded these scenes this the first episode of Season 1. Thank heavens it’s behind me now.

Erica: They tried to redeem Lagohaire last season, but anything they built was deleted in this episode. The big plot edit (Jamie being shot in front of Claire) was mostly to streamline the plot. Laoghaire comes off as more melodramatic and Claire less so.

Alicia: Well, the angry sex scene was pretty much the same, but yeah. I thought maybe I’d remembered it wrong, but no, in the book it’s uber melodrama. Really their entire time at Lallybroch (this time) is one of my least favorites in the book. I get she’s upset, but at times it kind of peeves me she gets upset at him for being married when she was. I’m just not buying that whole ‘yes but it’s different’ crap. Not my fave part of the book. So very happy they truncated it. Much more palatable this way.

Alicia: So, we’ve met Marsali now. And that’s some amazing casting because she looks like she could be Nell Hudson’s daughter. Looking forward to seeing her and Fergus together.

Erica: Lauren Lyle is such a dead ringer I did a double take because I thought she was Laoghaire. I really hope she makes Marsali so great we understand why Jamie wanted to be her father.

Alicia: Interesting choice to make Jenny so angry and bitter toward Claire. In the books she was more accepting and warm toward her at first. Then after their heart to heart you realize some of her coldness is because she’s afraid that Claire will take Jamie away from them for good. Which is true.

Erica: I really didn’t like Jenny in this episode because she was so cold. Next week should be fun when they confess they lost Young Ian to pirates. I hope they actually show it rather than gloss over it like in the book.

Claire and Jamie leave Scotland, sailing to the West Indies on an urgent quest. But when the superstitious crew looks for someone to blame after a string of bad luck, rescue comes from an unlikely source.